Unless otherwise stated all events cost £8 for adults and £5 concessions for over 65s, children, students and people on benefits.

All events are 60 minutes unless otherwise stated.

Laura Powell and Daniel Tyte – Saturday 29th October at 11.00 am

Cardiff’s book lovers will experience sense of literary euphoria this month as a diverse list of writers take part in the first year of the Cardiff Book Festival.

The three-day festival will consist of high profile figures taking on various workshops, book events, live music, debates and lively discussion to keep guests entertained throughout the days. Guests may also be drawn in by the selection of food and drink, along with the Roald Dahl walking tour which will celebrate the Welsh author following Roald Dahl’s City of the Unexpected earlier this year.

Anna Day, Brian Meechan and Cerith Mathias have put in an outstanding team effort to organise the festival  in order to show Wales’s incredible literary heritage. Anna, founder of publishing company ‘Playroom Press’ has stated, “Welsh writers are once again taking the world by storm, so it seemed that this festival was the right thing for Cardiff.”

Daniel Tyte, a well-respected Welsh author who will be featuring at the festival has also shown a magnificent amount of support to Anna, Brian and Cerith. “It feels strange that Cardiff doesn’t already have a book festival” the author of Half Plus Seven explained. “We must be the only European capital without a book festival and they’re brilliant places where the written word comes off the page and gets talked about, debated and discussed which is good for society.”

The incredible effort shown by the four who have physically put the festival together has certainly paid off as they have managed to obtain an overwhelming amount of sponsors to support the highly anticipated event. The chief executive of Literature Wales, Hollie Aldridge said, “We are pleased to support the festival and wish it every success.”

Unless otherwise stated all events cost £8 for adults and £5 concessions for over 65s, children, students and people on benefits.

All events are 60 minutes unless otherwise stated.

Laura Powell and Daniel Tyte – Saturday 29th October at 11.00 am 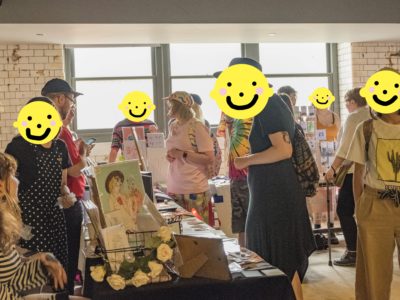