For more details on the upcoming competition

To see Jonathan competing in a previous Hearthstone eSports League Event event watch the video below: 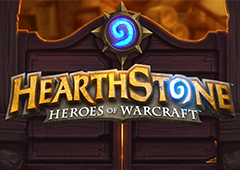 Swansea is hosting its second eSports weekend, titled Battle for the Mountain, from the fifth to the sixth of November.

Welsh universities can compete in up to 10 video games and another eight are available for casual or non student players. Of this 10 includes the video game Hearthstone.

Hearthstone is an online card game and spin-off of the popular video game, World of Warcraft. At the previous Battle for the Mountain event, Hearthstone was the only game in which Cardiff University managed to beat Swansea University, winning two to one.

However, this year the competition is much tougher, with South Wales, Bangor and Aberystwyth University also entering. Despite this, Cardiff University’s Hearthstone team are “very confident” of victory.

This year’s team includes: Jonathan George, 18, George Baldwin, 19 and Ben Millar, 21. Between them they have spent approximately £350 on Hearthstone, played in many eSports competitions and racked up hundreds of hours playing the game. Returning competitor and now team captain, Ben Millar, says, “We’ve got the experience and willingness” to win again. Ben has won many of Cardiff’s monthly Hearthstone competitions – hosted at local internet cafe and gaming centre, Talk and Surf. Jonathan was once 40th in the EU and George has excelled to high rankings despite being a relative newcomer to Hearthstone. However, George did express concern at this being his first competition. He stated, “We don’t want to make a total fool of ourselves.”

The event, which is being hosted in Swansea University’s new Bay Campus, is also open to spectators for a £5 entry fee. Declán Murphy set up the Battle for the Mountain event as he said there is a lack of a University orientated eSports competition in Wales. In relation to Hearthstone, Ben said he was aware of many competitions in England but that eSports is, “Really big and needs recognition in the South of Wales.”

For more details on the upcoming competition

To see Jonathan competing in a previous Hearthstone eSports League Event event watch the video below: