Bryan will be performing at the Oxjam Cardiff Takeover on 10 November 2013. For more information visit http://dl.dropboxusercontent.com/u/70533656/Oxjam/Oxjam_Cardiff_Takeover/Holding_page.html

Bryan, 24, a Cambridge graduate has performed with the Footlights at Edinburgh Festival and at Cambridge May Balls, as well as working with comedian Josh Widdicombe.

He now plans to open his stand-up to a wider audience in Cardiff by doing gigs at bars and comedy clubs.

With a conversational style which draws upon jokes he’s heard down the pub, Bryan is vastly securing gigs.

His most recent performance was at Miss Jones bar in Cardiff for ‘The King or Queen of Comedy’ where he was crowned The King of Comedy.

Bryan said: “It was a fun gig and I can’t wait to do more. I find the Cardiff comedy community very supportive.”

Bryan will be performing at the Oxjam Cardiff Takeover on 10 November 2013. For more information visit http://dl.dropboxusercontent.com/u/70533656/Oxjam/Oxjam_Cardiff_Takeover/Holding_page.html 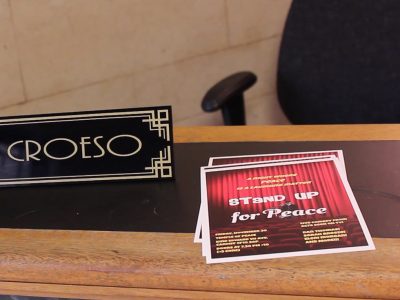