Home > No logo > In depth: The anti-austerity movement

In depth: The anti-austerity movement

Why haven’t I seen the protests in the news?

The mainstream media has been criticised for failing to cover the anti-austerity movement’s progress.

Sharing of this video has therefore been encouraged to raise awareness of the cause.

This clip captures the protest in Cardiff on November 5.

This video is from ravens-tree.com.

Chants of ‘We are the 99%’ echo the streets of Cardiff as a swarm of masked Guy Fawkes descend on the Welsh capital. As part of the Occupy movement, the cartoonist impression of Guy Fawkes has become a symbol of anti-establishment. It’s November 5 and the legacy of his Gunpowder plot lives on. There’s a brisk wintery chill in the air as the protesters march down Queen’s Street. The masked activists continue undeterred, they have a message to get across tonight.

With inhabitants of Wales being hit hardest by austerity measures such as the so-called Bedroom Tax and protests like this popping up more frequently, are we witnessing an increase in activism?

The anti-austerity movement comprises many different groups with their own agenda. This particular protest was engineered by the Occupy Movement, whose slogan ‘We are the 99%’ first emerged on a Tumblr page in America in 2011. This reflects the current economic situation in which it’s said the majority of people are paying for the mistakes made by the top ‘1%’ even though wealth and control are concentrated within that powerful minority.

Another influential group within this movement is the People’s Assembly. Spanning across the UK, this group’s spokesman is Journalist and Campaigner Owen Jones. He has said,

“It’s time to tap into our country’s proud tradition of protest and civil disobedience, and make loud and clear our demand for an alternative to the failure of austerity.”

The People’s Assembly also took part in this day of protest, aptly named the ‘Bonfire of Austerity’. Activists protested outside the British Gas building making a clear point about their disdain for plans to hike up gas prices. WalesOnline spoke to one protester, Ramon Corria, who said, “People are having to make the decision between heating and eating, which is clearly unfair.”

Another issue of contention within austerity is the so-called Bedroom Tax. This is where those who are perceived to have a spare bedroom will face benefit cuts. Wales is being hit particularly hard by this tax with 1 in 3 households being impacted and consequently many are now spiralling into debt.

Taking a slightly more conventional approach to activism, further action was taken by The Wales TUC when they met on a ‘National Day of Action’ on November 20 to discuss the blacklisting scandal. Meeting in the Senedd, the Wales TUC held an event to discuss the issue in which powerful construction companies allegedly held secret files on workers with information that they then used to keep them out of employment.

Caption: The panel at the Wales TUC meeting on Blacklisting. Photo: Sally Biddall

“It’s a disgrace that so many people have been treated so poorly.”

The Wales TUC are therefore  proposing an inquiry and compensation for workers who were impacted. The scandal was claimed to be, “The biggest abuse of workers’ human rights in the UK” by Nick Blundell, UCATT (Union of Construction, Allied Trades and Technicians) secretary who spoke at the event.

The alleged blacklist was seen as a classist attack by the powerful corporations on workers. “It is a class issue. Blacklisting and unchecked capitalism go hand in hand,” says Blundell.

The scandal has been further condemned by the vice president of Wales TUC Sheila Bearcroft, “It’s a disgrace that so many people have been treated so poorly in the 21st Century.”

And it’s this sense of injustice which seems to be driving the current movement, not only in Wales but on a national level. The simmering strength of the backlash does seem in some ways reminiscent of the riots of 2011. These riots mushroomed out of a young man being shot by the police in London, which subsequently spread to other UK cities. It unearthed a burgeoning feeling of resentment among those who had had enough of feeling ignored. Many were left feeling blamed for something that essentially wasn’t their fault.

A supporter of the movement spoke of his contempt for the current political landscape. Sam Butler said, “It’s easy for them to point at the usual scapegoats and blame them.”

“Bold steps were needed to rebalance the economy.”

The leader of the Conservative Party for Wales has fought back, suggesting austerity measures are simply a necessary evil. Andrew Davies said, “The dire economic situation in May 2010 is well documented and bold steps were needed to rebalance the economy.”

In regard to strategies being class based, he stated, “Far from unfairly targeting those with lower incomes, the UK Government has cut income tax by half for people on the minimum wage.”

Looking towards the future, he added, “Welsh Conservatives believe that Wales deserves an economy that is prosperous and vibrant.”

Back on the streets of Cardiff and the reverberation of the chants grows softer. The crowd of masked individuals slowly fragments and disperses into the dark cavities of the Welsh capital. Their chants may be becoming less audible but their message is not. The activists won’t stand for inequality any longer.

Why haven’t I seen the protests in the news?

The mainstream media has been criticised for failing to cover the anti-austerity movement’s progress.

Sharing of this video has therefore been encouraged to raise awareness of the cause.

This clip captures the protest in Cardiff on November 5.

This video is from ravens-tree.com. 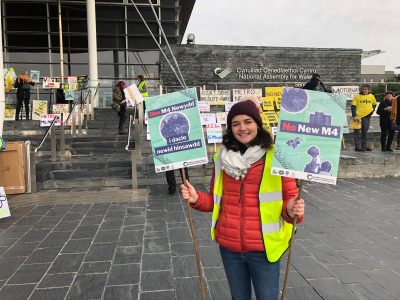