Home > No logo > In-depth: the muddy waters of ethical shopping

The pound in your pocket is a moral thing, a token of political force expressed when you spend it. Recent months in the UK have seen a customer boycott of Starbucks for tax avoidance, a frenetic build-up to Christmas that was meant to reinvigorate the British economy, and the usual rush for the January sales. Consumerism is something of a dirty word, and at no time are its excesses more striking than around this time of year.

Every year in the United States, the Black Friday sales bring violence and petty behaviour to the shopping experience. In November 2012, two people were shot in an argument over a parking space at a Walmart in Florida. We can look on from the UK and say that things are not as bad here, but our mindset is much the same. Whatever the traditional roots of Christmas, it has a lengthy prologue of shopping, and an epilogue of buying things.

Seeking to remedy this culture that pays no heed to conscientious production and sustainability: enter a relatively new breed of retailers calling themselves ethical.

Straightforward choices like where to buy chocolate and coffee as a gift present moral issues about the economic and political circumstances of its production. Food bearing the “Fairtrade” insignia have passed the Fairtrade organisation’s standards of minimum pricing and such things as the funding of social projects near farms and other communities of producers. Most food from the developing world is not Fairtade, and even that standard takes criticism for not stipulating a percentage share of the profits should go to producers.

Even produce commonly grown in the UK isn’t necessarily an ethical option – much of it is flown over here at great cost to the environment. Generally speaking, food bought locally will have a less polluting production chain behind it because it has not been air-freighted across the world to get here.

On the psychological level of the consumer, there too are reasons to buy local. When it is easy to throw similar food into a shopping trolley at any time of the year, it is possible to go through life without ever figuring out which goods are in season and which are not.

Even when consumer boycotts are at their most effective they are still not very effective modes of political change. The country’s righteous middle-class can sustain about one or two boycotts a year, but to affect more than that you have to go further and make ethics a component of every buying decision.

Fortunately, Cardiff has no shortage of locally-sourced food on offer through various market stalls and food festivals. So you can be free at least from the moral minefield of having your potatoes flown in from Israel.

Cardiff’s Riverside Community Market Association was formed in 1998 with this in mind. First as an irregular market in Despenser Gardens, the group now runs two weekly and two fortnightly farmers’ markets in the city. They have a strong emphasis on goods sold directly from the producer to the buyer. As the sellers are local, it isn’t being flown over from a foreign country and causing emissions. If you have any questions about organic accreditations or ethical issues – ask the farmer. It’s likely to be the same person serving you.

“Our many customers and visitors clearly do love and value the local food scene at the markets. Being able to meet who has farmed, grown or made your food is very special to them. The disconnect people had in the past to farmers, the land and countryside is closed for many by attending the markets. The markets do turn our capital city into a market town, literally.”

The Riverside Market is situated across the river from the Millenium Stadium every Sunday from 10am till 2pm.

EthicalChef has been going since 2010. Their supper clubs of vegetarian meals made with local ingredients sees a great way to meet up with others while dining on finely cooked ethical scran. Deri Reed the ethical chef cooks the food and sells it at the Riverside Market. He also publishes all of the recipes used on the EthicalChef website. Reed says:

“It seems to me that the restaurant and food industry has had a huge amount of negative press (quite justified in many instances) about how much food waste and excess packaging it produces. What EthicalChef is about is caring about food from the soil to your fork and beyond!” 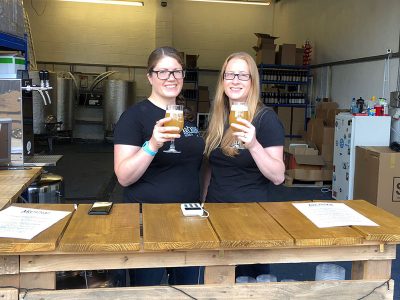