Recognition of the covenant

The Military Covenant is a mutual obligation between the nation, army and each individual soldier that acknowledges the service troops provide to their country and in return offers support, respect and responsibility to aid them in matters of health, housing and education.

Reverend Joe Rooney said, “There are lots of funds out there, I don’t know whether we need more but maybe we need more information about what already exists.” Here are just some organisations you can get involved with in light of the covenant.

It is 11 November. Silence. People stop and think. When the two minutes has been and gone there is a return to work, to chatting to a friend, checking a Facebook news feed. Meanwhile, young troops are fighting a contentious war abroad in Afghanistan. A war that is geographically removed from our consciousness the majority of the year, a war that needs to be worth the sacrifice of young soldiers, armed forces personnel who deserve the maximum possible levels of support.

The current death toll of British troops that have bravely lost their lives in Afghanistan is at present 391. If they return home safe from a conflict zone it does not necessarily mark the end of their experience. They may have to recuperate from injury, deal with trauma, integrate back into family life and prepare to return to the war zone again. Prime Minister David Cameron has set a provisional date to be out of Afghanistan by 2015. We have now been at war for over a decade which raises the question whether enough is being done to support the welfare of our troops when a precise end to the conflict cannot be certain.

Lee Harris is a 24-year-old Corporal with the Royal Military Police and was in Afghanistan in May 2009 for six months attached to the Infantry (Two Mercian). The welshman is due to return to the conflict zone in April. Referring to Afghanistan he said, “The amount of deaths and injuries were never supposed to be anywhere like they are.” Lee avoids telling his family the truth about his tours to stop his mum worrying. He said, “I tell them I’m in a nice place like Bastion or Kandahar, when really I’m out with the group in some rubbish little hell hole.”

Return from the hell hole

So what happens to troops who aren’t as fortunate as Lee and return from the conflict zone in need of help? Reverend Joe Rooney is an Officiating Chaplain to the military (OCM) and is stationed at Beachley Barracks near Chepstow with the 1st Rifles Regiment of the Army. He acts as an initial point of contact for forces personnel returning home from Afghanistan and plays a vital role in ensuring that they seek the correct psychological and physical support if needed. He said, “There is never enough support for anybody who has been into a conflict situation but having said that there is a great deal of support available.”

Headley Court is a specialised rehabilitation centre in Surrey specifically for injured troops. Joe gave an example of the heroic nature of a recuperating victim of the Afghan war he encountered on a visit to the centre who had lost a limb and was learning to walk on an artificial limb, “They just realise they have got to get on, they have got to live and their families have got to be dependent on it, so they just do it,” he said. Organisations like the Soldiers, Sailors, Airmen and Families Association provide additional accommodation for families visiting Headley Court and the charity, Help for Heroes supplemented the facilities there with a swimming pool and expanded gym.

A British soldier from the 1st Rifles talks to Afghan children Photograph: courtesy of Beachley Barracks

Joe describes how many troops only really begin to deal with any angst they have when they come home, “There is a lot of stress about once the guys come back, takes some weeks for it to come out and show itself but a lot of it does come out.” The Ministry of Defence has 15 military Departments of Community Mental Health across the UK that provide out-patient mental healthcare. It also has a contract with the Priory Group of hospitals for in-patient care for soldiers. Joe explains that a tour can often change a troop’s personality therefore psychological support is imperative to help them to settle into home life.

A family support unit at Beachley Barracks advises families of soldiers to prepare for the potential eventuality that their loved ones may be different on arriving home and show signs of suffering from trauma. The families and friends of servicemen and women play a crucial role in supporting soldiers either by setting up their own private funds or simply by uniting together and understanding how their family members might be affected by their experiences in a conflict zone. Lord George Robertson, former UK Defence Secretary said, “We have got to have an overall package that looks after the people that have been in action, the people who support them in action and the families back home as well.”

Lee describes remarkable changes in the Afghan National Police and Afghan National Army as he prepares himself to head out to the conflict zone again in the near future. He said, “hopefully within the next two to three years there will be big deductions in the amount of British troops in Afghan.” His reports home will spare his family any concerning details and he will venture to Afghanistan with the knowledge, in his words, that, “The Army has a very good support unit. This is down to claims over the last few years that it wasn’t up to scratch.”

Recognition of the covenant

The Military Covenant is a mutual obligation between the nation, army and each individual soldier that acknowledges the service troops provide to their country and in return offers support, respect and responsibility to aid them in matters of health, housing and education.

Reverend Joe Rooney said, “There are lots of funds out there, I don’t know whether we need more but maybe we need more information about what already exists.” Here are just some organisations you can get involved with in light of the covenant. 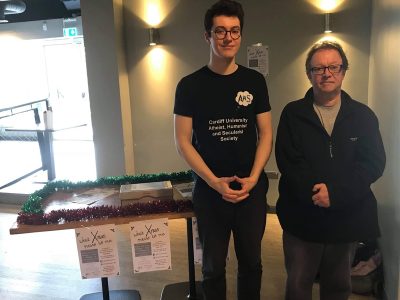 Doctor talks about the realities of war