After promoting Welsh food for more than a decade Sian Roberts has finally started to see a change.

If you ask any international resident in Cardiff, almost nobody knows what Welsh food is really like. Apart from Welsh cakes and rarebit, which are easily available and quite popular, it is more difficult to find other dishes as they are not well advertised.

Sian Roberts, promoter of Welsh Food, says that this a shame because Welsh food should now be very hip. It is in tune with the global trend of preferring fresh food. ”Our food is local, seasonal, and healthy. Because everything was quite small, the standard of production is very high. Sheep is our main export and the reason it’s so good is because all the animals are fed natural grass.”

Other Welsh specialties are also healthier. “If you think of lots of dishes, there are so much cream, creating problem with obesity and diabetes. In Welsh cooking, all the cakes are quite simple, they are not full of cream, not full of alcohol. Our cakes are made from just flour, butter sugar and some dried fruit,” she says.

Bara Brith cake at the National Museum, one of Sian’s favourite.

Sian knows her food. She has been promoting Welsh fares for more than a decade. Her company, Loving Welsh Food, organises food and drink tours, tasting tour and cooking workshops. Although there is still a long way until Wales would be recognised for its good quality food, she felt that over time, her job is getting easier.” I think people know more about Wales now. We have to thank Gareth Bale, a fantastic ambassador and football player,” she says laughing.

Her passion for food is running in the family. “My grandmother was a scullery maid and work her way out to be a cook. She ended up working for the Queen’s gynaecologist in Aberystwyth. She use to cook with olive oil and turmeric and have my mum go to the chemist to buy them. Nobody in this country cooked with ingredients like that. She then handed down her recipe to my mother.”

She initially wanted to become an interpreter by going to a language school, studying French and Italian. But somehow, the culinary world always comes to her. “My first was job was actually a food tourism job, but that time of course the term didn’t exist.” She took groups of wealthy tourists travelling from Paris to Champagne, taking them on excursions through a small vineyard and a farm that made brie cheese the old fashioned way.

From there she continued working all around the world. ”I went to different places like France, Italy, Bali, Hong Kong, where food and drink were just celebrated more than in here.”

After her world travel, she went back to Wales and worked on television as a news reader, where she also presented food and drink shows at times. But after marriage, she decided to work as a freelancer to have more time with her family. It was during this time that she thought of seriously promoting Welsh food.

Along with the Welsh Development Agency, she travelled to the US, France, Italy, Spain and Germany to raise the profile of Welsh food and drinks. “We would take a mobile kitchen around and display Welsh products. We cooked traditional recipes, talked about Welsh food and the whole ideas was to tell the world what produce we have.”

Some of the favourite recipes are cawl, a soup/broth usually made with Welsh lamb; bara brith, sometimes known as “speckled bread”, can be either a yeast bread with dried fruit or something more like a fruit loaf; laverbread, seaweed spread traditionally eaten for breakfast; Welsh rarebit, a savoury sauce of melted cheese poured over slices of toasted bread and Glamorgan sausage, a vegetarian sausage made of breadcrumbs, leeks and cheese.

She found out, unsurprisingly, that people knew nothing about Wales. “The Americans would say that people know about England, Ireland, Scotland, but they don’t know about Wales. One of the reasons is apparently because so many people came to Wales at the industrial revolution, while a lot of the Irish and Scotts went abroad. Their tourist industry started much earlier when those people were coming home.”

That lack of knowledge in itself is good because when they visit Wales they would be happily surprised. “When the French and Italian tried our food, they would say ‘Now we know you have good food, we will come on holiday’. So it was actually the thing that was stopping them from coming.”

But the problem is because Welsh food has taken back a seat for so long it’s very difficult to find them in the city. “When people came they would ask ‘Where should we go?’. In Cardiff, there aren’t that many (Welsh food).” Even the locals, she found out, does not really know their own cuisine.

A selection of Welsh cheeses.

Welsh food also carry the same stigma as other British food: very bland and plain. “France, Italy, Spain and China have quite a complicated recipe because these had been created for the aristocracy who could afford to buy exotic ingredients and they have chefs to make them. In Wales, what we have are cuisines of the people. So lots of the dishes that had to be made at home using using literally just what you have.“

Another key influence was the Protestant Reformation, which teaches its adherents to lead a simple live. “There was a general guide for cooks that said that too many sugar, sauces and too complicated, seasoned food were regarded as a form of sensual indulgence.”

But the bad reputation does not deter her from continuing to promoting Welsh cuisines. After her stint with the Welsh Development Agency, she went on to create her own food promotion company called Coginio, which means ‘cooking’ in Welsh. It was rebranded as ‘Loving Welsh Food’ a year ago.

Sian and her partner made a couple of DVDs on Welsh recipes and run workshops for foreign students, special needs children and hospitality courses. “A lot of people come to Wales to buy second homes and start a restaurant business. They know nothing about Welsh food, so the course was to tell a little bit about food heritage and they all got to cook.”

She then went on to develop cooking tours, by her own company or in conjunction with other operators. Recently Loving Welsh Food launched Cardiff Tasting Tour, held every Friday. It is the first tour of its kind in the Welsh capital.

She believes that with continuous promotion, Welsh food will eventually become more famous. “Remember the seatbelt ads? It takes ten years of something to kick in. So for Welsh food, we started 20 years ago doing (promotion). Now more and more people, especially tour leaders who used to go to Scotland, are coming to Wales because it’s nearer, smaller but also has a lot of good food and things to see.” 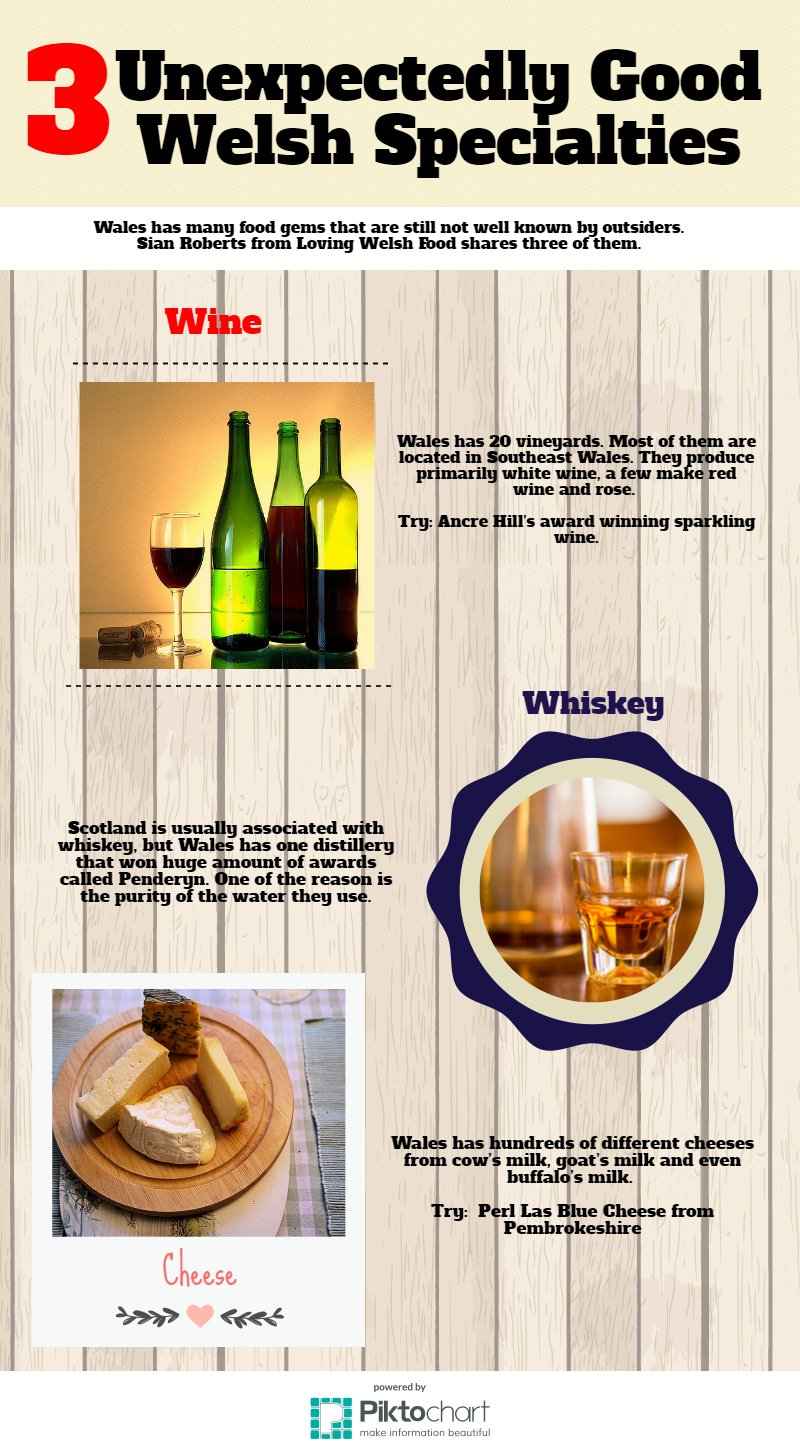 Keep updated on Welsh Food news by following these accounts:

Sadika Hamid
Writer, traveler, gourmand. Life is never boring. There is always something exciting lurking in the corner.
Tweets by @intercardiff