Schools which regularly use the centre:

Where people come from to visit Rebounders:

Conditions which affect those who attend Rebounders:

Ways in which they fundraise:

To get involved, or for more information, visit the Rebounders website.

For most people, swapping accountancy for coaching trampolining wouldn’t add up. But for Heather Sargent it was justified. Last week, her hard work was recognised as she was voted Nation Radio’s disability coach of the year.

Putting a spring in our step: Heather assuming the role of coach during the evening’s class

After 10 years of being an accountant, she was roped in to coach her daughter a Aimee – a Welsh international trampolinist – during training. With a new career in coaching off the ground, she decided to coach in the field of disability sport. Heather founded her charity, Rebounders, in 2002. “I used to work in leisure centres, church halls – all around the place,” she says. In 2007, the group would move to their current home in Ocean Park, Cardiff.

“It’s very rewarding. It’s just a very enjoyable job,” she says with a smile directed at the newest arrival to her class.

She works a six-day week, but sometimes works on Sundays to travel with the children to competitions. With great pride she admits to having trained Welsh and British champions with disabilities. Passionate about the sport and the people she coaches, gravity never has an effect on her standards: for her, what goes up must stay there.

Despite often dealing with challenging behaviour, Heather and her team pride themselves on their ability to remain calm. “You have to be very firm. You have to know each person and how to get them to achieve things.

“There’s nobody you can turn away or that we would want to turn away.”

Not only does Heather cater for the young of body, but she also works with the young at heart. Whether you’re seven or seventy; receive pocket money or withdraw a pension, you are made welcome. “There’s nobody you can turn away or that we would want to turn away,” she says.

On November 5, Heather was named Nation Radio’s disability coach of the year. Surprised by the victory, she says, “It’s just nice to know that so many people appreciate what we do and voted for it. Most of the people at the awards had never heard about us, so we were able to tell people about what we do.”

A dry sense of humour

Gareth Slocombe, one of the Rebounders team, reliably reports that Heather has a dry sense of humour. But despite being able to have Gareth in hysterics, her professionalism and sense of duty to the cause never wavers. She demands from her team a willingness to get to know the children who bounce enthusiastically through her door, and for them not to be scared of people with disabilities.

Laughing away: The Rebounders’ founder involved in friendly conversation with two parents from behind the counter. In the centre’s corner shop she sells a range of sweets and drinks to visiting children and parents

As the evening’s lessons begin, Heather stands behind the desk of her corner shop and talks to two parents about the events of the day. There is a strong sense of family at Rebounders; a convivial atmosphere which stems from the undoubted head of the household – Heather.

Looking to the future, she predicts, “We’ll definitely have a few more centres around the place”.

Schools which regularly use the centre:

Where people come from to visit Rebounders:

Conditions which affect those who attend Rebounders:

Ways in which they fundraise:

To get involved, or for more information, visit the Rebounders website. 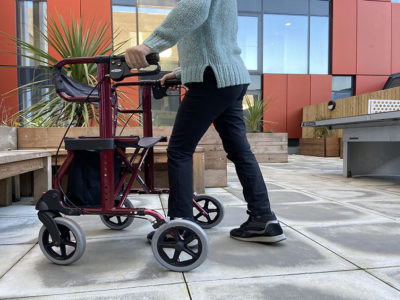 #InPoverty: Personal Independence Payment has affected the lives of many