Home > Active > FootGolf is on the rise in Wales

FootGolf is on the rise in Wales

People began playing in Europe around 2009, then it spread to South and North America. The American FootGolf League is the national organisation with the most FootGolf courses.

Why not give FootGolf go?

When: Open everyday from 8am – 5pm 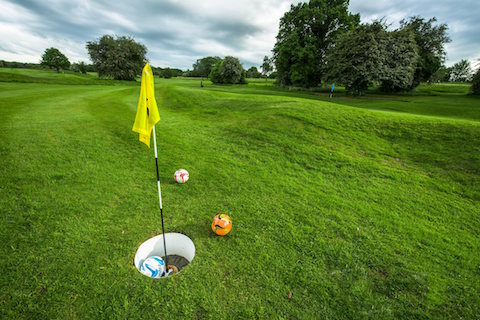 FootGolf courses are teeing-off across South Wales; from Cardiff and Rhondda to Swansea, it’s now said to be one of the fastest growing sports in the UK. It’s as simple as it sounds. It’s not your average round of golf, instead  you play with a football and your foot. As the name suggests, the aim of the game is to kick the football into a 21-inch diameter hole cup in as few kicks as possible. It’s much easier to play than traditional golf, with no technical ability to play at a good level. Instead all you need is a good pair of trainers.

Project manager at Swansea FootGolf, Roger Maliphant said: “It’s definitely become a lot more popular. It’s a game anybody and everybody can play without any restrictions. It combines the two most popular sports together.”

Set in Swansea Bay, it’s a great day out for the whole family. “You get students, parents and even the grandparents involved”, he said. The Swans’ professional football players are no strangers to completing a round or two either, according to Roger. Not only does FootGolf offer a trendy alternative to traditional golf, its growing popularity is saving the sport from decline. The Welsh Golf Club Survey 2013-2014 discovered that between 2008-2013, overall membership  tumbled by 19%. Younger players especially were increasingly put off due to its technicality and the high cost of equipment.

Having arrived in the UK four years ago, FootGolf emerged just at the right time as the number of those regularly visiting the fairways was falling. Due to this initiative, the sport is now rapidly growing in size and as a result saving more clubs.

The head of National development for FootGolf, Gareth May said: “FootGolf attracts younger players, and its bringing that demographic back into golf. People joining a golf club to play FootGolf are much more likely to try golf too.”

Watch this video below to see the sport in action.

People began playing in Europe around 2009, then it spread to South and North America. The American FootGolf League is the national organisation with the most FootGolf courses.

Why not give FootGolf go?

When: Open everyday from 8am – 5pm