South Wales Renegades was founded in October 2018 by student Nathan Catherall, 21 and has since grown to 915 members. The motorcycle group is a non-profit organisation with no restrictions on membership other than being legally allowed to ride on the roads.

Nathan moved to Cardiff for university and found there were very few active motorcycle groups in the area so began establishing his own.

He put handwritten notes on other bikes in the university car park and by December the community had grown to 75 members, connected via a Facebook page. Since then, administrative and moderating teams have been formed and the group has continued to expand.

The club has official rides run by the admin team on a weekly basis, lasting usually a whole day. These run on Fridays, Saturdays and Sundays depending on member availability. Nathan said, “Some of the riders don’t want to stop riding, we just keep going until we run out of money or fuel.”

One of their popular destinations is the Owl’s Nest Tearoom Diner in Llandovery. Ian Davis, proprietor, says that they are “The up and coming future of biking bringing the traditional values of the biking community to the younger generation.”

Despite the connotations of their name, safety is central to the group’s activities. The rides are conducted in an orderly manner with many rules to ensure the safety of the group members. These include the use of high-vis jackets and designated road masters, navigators and on-the-road wardens from the admin team.

The motorcycle group give back to the community on a regular basis and engage in many charity events. Past events include the blood drive, the Santa run and the Easter Egg run which give toys to children that are either ill or cannot afford them.

South Wales Renegades is a community for “People who love the road, bikes and riding, and who want a safe group of people to do it with.” 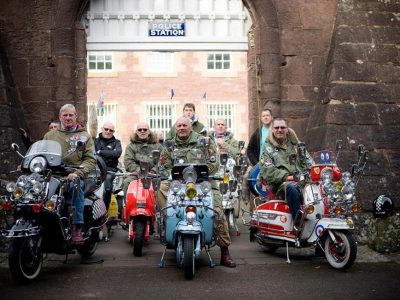