Olivia posing with her favourite camera, the trusty Lumix How to spread the word

A key way to make yourself known in the wedding industry is to get noticed at the wedding fayres. Olivia regularly attends wedding events to meet potential clients and other businesses. Another day, another fayre; this time the Cwtchfest 2018 (Credit: Olivia Dickeson) 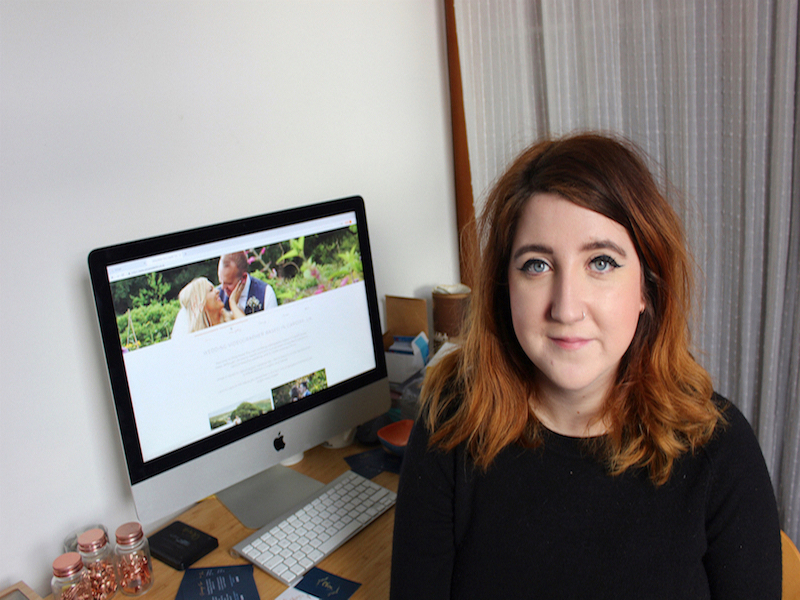 Olivia at her desk, where she spends all her free time editing wedding videos

The 25-year-old from Roath is still the assistant house manager at the New Theatre in Cardiff where she works between 30 and 37 hours a week, but she spends all of her available evenings and weekends building her wedding empire. Over the last 12 months her business Olivia Made This has been very busy.

“This year, my first year of business I filmed 17 weddings and next year I’ve currently got 25 weddings booked,” Olivia says, glancing through her planner which is crammed with notes and numbers.

Olivia films what some would regard as the most important day of their lives, a high-pressure job indeed, but there’s much more to it than that, something she’s eager to make clear.

Alongside the camera work there’s also the weeks of editing, the wedding fayres, the bookings. “If there’s a time that I’m at home it’s very rare that I’m not doing my wedding stuff,” she says, gesturing to her desk which is scattered with every imaginable card: memory cards, business cards, and thank you cards from happily married clients.

Olivia is clearly confident in her skills, which she picked up on her Film and Video degree at the University of South Wales, but far more cautious about giving herself a title.

“It’s taken me about a year to kind of wrap my head around the idea that I might be a businesswoman. I still find it quite difficult when I introduce myself to people. My go-to is to tell them I work in the theatre and not that I have a wedding videography business,” she says.

Part of Olivia’s anxiety stems from being able to do what she loves for a living, as though it were too good to be true. Olivia admits she’s a hopeless romantic who enjoys the atmosphere of people when they’re at their happiest. “I just feel incredibly lucky,” she smiles. Olivia says she loves her job at the theatre but plans to take on enough weddings to commit full-time to her business.

Sitting on her desk, propped near the Mac where she edits the wedding videos is a card that reads ‘Be a warrior, not a worrier’. This mantra reminds Olivia to focus on her ability, and not the pressure and risks that come with having a business. A card propped up on Olivia’s desk, reminding her what she’s capable of

Next to the card there’s a phone. The phone rings. Another engaged couple are interested in the work Olivia has posted online. Another couple who want Olivia to film their special day. Another step closer to Olivia reaching her self-employed goal.

“You know, there are obviously periods during the year that aren’t busy…” Olivia trails off, adding the latest appointment to her diary.

It’s clear that the prospect of becoming your own boss is an anxious one, but Olivia’s packed planner and strong work ethic suggest the path of a competent and successful businesswoman – of a warrior and not a worrier.

Olivia posing with her favourite camera, the trusty Lumix

How to spread the word

A key way to make yourself known in the wedding industry is to get noticed at the wedding fayres. Olivia regularly attends wedding events to meet potential clients and other businesses.

Another day, another fayre; this time the Cwtchfest 2018 (Credit: Olivia Dickeson)