Local pantos to check out this Christmas

Pantos draw in record audiences every year, but could they play a greater role in the future of theatre?

As much a tradition as late night shopping, mince pies and dodgy Christmas jumpers, the pantomime is close to the heart of a truly British Christmas. In a society where wide-screens and surround sound come as standard issue in households, many of us still leave the comfort of our sofas each year in favour of a predictable story line, dodgy puns and men cross-dressing as women.

This year, Cardiff’s New Theatre sees the arrival of swashbuckling pantomime Robinson Crusoe and the Caribbean Pirates with ventriloquist Paul Zerdin as Robinson Crusoe and Christopher Biggins as the Dame. New Theatre’s previous panto Cinderella was seen by 67,000 people making it their biggest show of the year. The panto racks up 12 performances a week over the festive run, bringing in the most people and the most money.

With broadband at home, high octane blockbusters in the cinema and realistic graphics on games consoles, seasonal pantos play an important role in drawing the younger generation away from modern technology and introducing them to the unique experience theatre can offer.

For many children a panto is their first experience of the magic of theatre. Pantomime critic Alistair Walkinshaw said drawing the next generation into the theatre is the only way to ensure the survival of commercial drama. The same is true for local theatres. Matt Smith, marketing manager at Cardiff’s New Theatre, is concerned for their future. “Some of our audience are quite elderly,” said Matt, “and when you reach a certain age you stop going out. Obviously we need to get new people in who are younger and who hopefully will have a whole lifetime of theatre-going ahead them.”

Pantomimes are a great way of introducing potential audiences to the theatre, and the concept of a traditional pantomime is constantly reinventing itself to appeal to each new generation of children. “They’re a lot more ‘pazzazzy’,” explained Matt. “There’s a lot more special effects. We had one where we gave everyone 3D glasses. You still get the ‘It’s behind you!’ that people love, but so much has changed over the years. It’s very interesting to see what people have done and how they’ve managed to keep panto fresh and keep bringing people in year after year.”

The introduction to theatre starts early on with school trips and parents bringing their kids to pantomimes at Christmas. It’s a safe bet that if you’re in your twenties now, you would have seen panto as a child, and because of this many young adults still go each year as a tradition. But how many visit the theatre to see other shows? “We’re very keen to get young people in and to experience theatre,” said Matt, “because if they’ve only ever seen panto, as brilliant as it is, it is only one aspect of theatre-going.”

Pantos may draw in the crowds every Christmas, but theatres face a difficult task attracting a younger audience all year round. To combat this, Cardiff Council’s arts active group runs a scheme in conjunction with the New Theatre offering discounted tickets exclusively for young people. Joanne John, assistant producer at arts active, describes the React scheme as, “A free theatre membership exclusively for 16 to 25 year olds.” Members can see shows for just five pounds, making the theatre a more affordable night out and at the same time, introducing young people to different types of performance. In a time of severe cuts to the arts, React is a rare opportunity for young people in Cardiff to see shows cheaply, and an even greater opportunity for New Theatre to encourage a younger audience into the stalls.

The original experience of theatre, and the audience participation of pantomimes in particular, can offer young people a thrilling alternative to the comparatively detached experience of watching a DVD. Rhiannon Jones, a trainee solicitor and theatre-goer, has signed up to the React scheme and would rather spend an evening at the theatre than in front of the TV.  “It’s a great night out and a lot more entertaining,” she said.  “If I’m home just sat on the sofa I get disinterested and fall asleep.”

Despite stiff competition from technology both on the silver screen and the small screen, theatre still holds a special appeal. If you spend your leisure time engaged in solitary activities like watching television and communicating online, the physical and social experience of theatre can be alluring. “The thing about going to the theatre” said Matt, “is each performance, because it’s live, is utterly unique. It’ll never be performed that way again. I think that’s what makes this so wonderful. Someone who comes tomorrow night will have a completely different experience.”

Perhaps when you’re on your way out from the stage doors, still hoarse from shouting ‘He’s behind you!’ at the top of your lungs, and all warm and fuzzy from the inevitable Happy Ever After finale, stop by the box office and see what your theatre has on offer over the rest of the year. It may not be Biggins making mischief in a dress, but who knows, you might just like it.

Local pantos to check out this Christmas 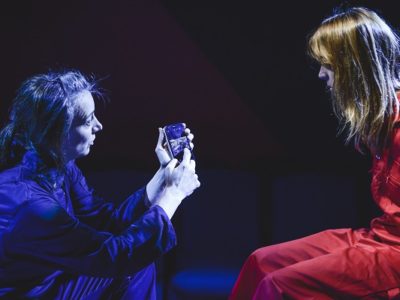