Stephen Gomes: the personality under the chef whites

A fighter outside but a chef inside

If chef and businessman Stephen Gomes had a tagline it would be ‘the new Heston Blumenthal’. Stephen’s cooking has recently received attention due to his molecular cooking techniques, with critics likening him to Heston Blumenthal. However, there is actually much more to Stephen, 39, the owner of Moksh, an award winning Indian restaurant in Cardiff Bay.

Stephen, born in Mumbai and brought up as a devout Catholic, has a quietly confident air about him. He dresses like a hip young Englishman with a lumberjack shirt and smart blue jeans, giving him the air of a businessman at ease.

Stephen was surrounded by chefs from a young age, as his grandfather was a chef and his father is regarded as one of India’s top chefs. So it seems that culinary skills are a gene that runs straight through the Gomes family.

Becoming a chef was not an obvious career choice for Gomes. The young Stephen had dreams of becoming a fighter pilot. “I was into flying and also wanted to be a rock star, my father said that to become a chef it has to come from within.”

As a teenager it dawned on Stephen that cooking was in his blood. He had always loved the power of food to bring the family together, but didn’t pursue his dream until he went to catering school in Mumbai at the age of 17. Now, food has become sacred to him, like his Catholicism. His conviction is that “the family that eats together prays together and stays together.”

After working in several different countries Stephen came to England, working as a chef for Cafe Naz in London. In 2007 Stephen opened his own restaurant, Moksh in Cardiff Bay. Opening it up in the bay was important to him as a lover of the bay, tucked away from the bustle of the city centre.

Stephen is modest about his talents exclaiming that business has never come easy to him. – “I’m not a very good businessman but I’m a good chef.” Despite this, the success of Stephen’s business speaks for itself, with the opening up of a restaurant in Bristol called Meluha at the start of this year.

The Moksh kitchen seems very different to Stephen’s personal kitchen, at home where meat on the bone and marmite are frequently eaten. Stephen comes alive within his restaurants creating spices unique to Moksh and experimenting in his Bristol laboratory with molecular gastronomy.

Having lived in Wales for nine years Stephen has become typically British, manifested in his love of marmite, which he has on toast every morning. Tapping into the British sense of humour is what Stephen does best with his fun character. “My food is fun and so am I.”

Despite being born in Mumbai Stephen feels settled in the Cardiff community. “I feel at home here. If I ever do open a restaurant in London I still want to live in Cardiff.” 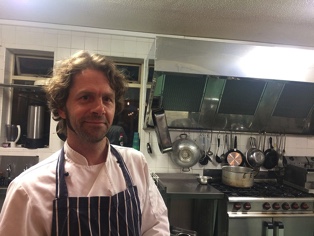