For details on Tŷ Hafan’s Carols at the Castle event

Performances
To see the care Tŷ Hafan staff put in watch this: 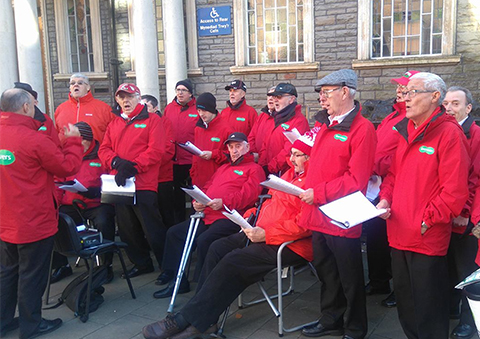 Specsavers has recently decided to sponsor Tŷ Hafan. Alison Stallard, the head of business and community for Tŷ Hafan, says, “Having the support of a household high street name like Specsavers is fantastic.”

Specsavers partnership with Tŷ Hafan extends to 35 of their stores across Mid and South Wales. They began their year-long support by donating £10,958. This is the exact amount it costs for Tŷ Hafan to provide 24 hours of care.

Karen Morgan, the manager of the Specsavers branch in Maesteg said the branches affiliated with Tŷ Hafan run a charity event four times a year. She says, “I hope to push the amount raised even further at the next Tŷ Hafan event.”

Tŷ Hafan is the only child hospice in Wales. It costs over £4 million a year to run and less than 4% of this money is given to them in statutory funding. This means Tŷ Hafan has to rely on donations.

Tŷ Hafan is also running its own event in Cardiff called Carols at the Castle on 1 December. As well as a choir performance, there will be a fireworks display.

After this, Tŷ Hafan’s next major fundraiser is their trek the Great Wall of China event. If you go you get to help repair a section of the Wall and leave a permanent legacy.

For details on Tŷ Hafan’s Carols at the Castle event

Performances
To see the care Tŷ Hafan staff put in watch this: