Home > No logo > In-depth: The black spots of unemployment

In-depth: The black spots of unemployment

This “southern arc of unemployment” is clearly visible on the lower half of the map.

But with many individual areas witnessing a decrease in unemployment levels over the past year, even though the disparities do still remain, the figures are heading in the right direction.

Adamsdown and Ely currently possess the highest levels of unemployment in Cardiff, both at 7.4%. When comparing these figures to those of January this year, there has been a decrease of 1.0% and over, with Ely previously at 8.6% and Adamsdown at 8.4%.

Areas like Ely and Adamsdown are hit by unemployment far worse than others, although this number is decreasing there are still huge disparities, and Cardiff council is being urged to do more. (Photograph: Alamy)

On the corner of Charles Street in the centre of Cardiff stands a building with the familiar green and yellow logo of the Jobcentre hanging above it.

In today’s economic climate, it is no surprise to see a steady flow of job seekers making their way in and out, as some endure the daily trudge to the centre in search of that all-important employment, breathing weary sighs as they depart.

For some reason however, those in the south of Cardiff are far more likely to take a trip to the Jobcentre than those in the north.

According to Cardiff council’s most recent figures, of the almost 10,000 unemployed people in Cardiff, there are nearly 2,000 more in the south of the capital compared to the north, with areas such as Adamsdown and Ely being hit the hardest.

These areas make up what the council’s head of economic development, Ken Poole calls, “the southern arc of unemployment.”

It is true that traditionally areas like Ely and Adamsdown have suffered from much higher levels of unemployment than others, but why is this the case, and what is the council doing to tackle this issue?

While discussing some of the causes of this, Ken admits that it is a whole combination of reasons, and claims the council is doing all it can to change this.

“We’re trying to ensure there is the right business infrastructure in place in these specific communities, and we’re also improving transport connections from these locations to other business parts of the city through public transport,” he explains.

However, councillor Neil McEvoy offers a far differing view on the matter, asserting that he is not aware of the council doing anything in particular to tackle the disparity.

The Cardiff Plaid Cymru leader declared, “The council are more caught up in their high-level plans of buying property rather than looking after the details.”

The southern arc of unemployment

The highest levels of unemployment currently stand with Ely and Adamsdown, both at 7.4%, with Splott at 6.8%, and Caerau at 6.5%.

This is in comparison to Lisvane in the north of Cardiff with a rate of 1.0%, followed by Creigiau and St. Fagans at 1.2%.

These figures do take population into account, but it is important to point out that there has been a decrease in the overall unemployment rate of areas over the past year, suggesting that whatever is being done is having some effect.

However, with the announcement of budget cuts for the Welsh government, surely the situation is only going to take a turn for the worse with each council being directly hit.

The recent revelations of how Cardiff council spends its money have also been causing quite a stir in the capital, posing the question why couldn’t a vast majority of this money be spent on decreasing the disparities in unemployment, rather than on refreshments for councillors.

This money could be used to establish new job creation programmes that are desperately needed in Cardiff, but instead it appears to have been spent irresponsibly, rather than on the matters that need real attention.

“We should be funding young entrepreneurs and supporting small and medium business enterprises, but we seem to lack initiatives like this nowadays,” says Neil McEvoy.

The changing face of unemployment

Charities and volunteer services in Cardiff are very much aware of the problem, and a number of them have set up projects in order to tackle it.

Luke Jones and Laura O’Keefe from VCS Cardiff have created a project to specifically help unemployed people aged 16-25 years old. The BIG Up Project helps people get into volunteer work, while also providing them with services to find employment through help with job applications and interviews.

Luke, an assistant volunteer adviser at the charity says, “It is important to go into these communities and reach out to people, because the environment is extremely tough at the moment and so it is even more difficult than it used to be to find jobs.”

Some areas of Cardiff have also been affected by the recession more than others, and the decline of heavy industry work means that the jobs many people’s skills were tailored to are now no longer available.

Councillor for Caerau Peter Bradbury admits that we need to, “better educate a new workforce”, and tackle the disparity between schools in the city if we want to see any real change.

Kirk Willis, a former resident of Ely agrees with this, declaring that the reasons for lower unemployment figures in these areas start at grassroots level.

“I can say from personal experience that the standards of education in these areas are not as high as others. Much better teachers are needed, who with parents will encourage children towards gaining the best education possible,” says the 52-year-old.

Kirk Willis grew up and went to school in Ely.

But for Rebecca Phillips of Splott, an individual who regularly visits the Jobcentre, the issues lie with a lack of support for older people in areas like hers.

The 34-year-old explains, “A lot of support is given to help young people find employment, but it feels like you’re forgotten once you reach past the age of 24.”

So unless more initiatives are created to tackle this southern arc of unemployment, the near 2,000-person difference between the north and south of the capital will remain.

And so the next time you’re complaining about having to go to work on a cold winter morning, think about those not in employment heading to the Jobcentre, in search of something you already have.

This “southern arc of unemployment” is clearly visible on the lower half of the map.

But with many individual areas witnessing a decrease in unemployment levels over the past year, even though the disparities do still remain, the figures are heading in the right direction.

Adamsdown and Ely currently possess the highest levels of unemployment in Cardiff, both at 7.4%. When comparing these figures to those of January this year, there has been a decrease of 1.0% and over, with Ely previously at 8.6% and Adamsdown at 8.4%. 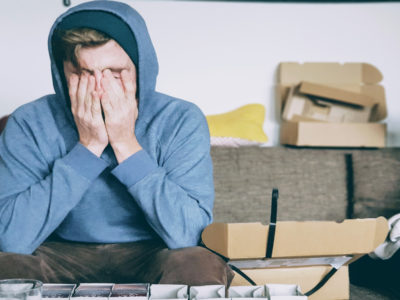 #InPoverty: Millennials are the ones left to pick up the mess of generation X