Home > No logo > In depth: The Outreach Project

In depth: The Outreach Project

John explains why the service is so important here

What other help is there?

It’s 8pm on a bitter December night; a blue double decker bus pulls up outside the softly lit up Museum. The people who have been patiently queuing on the steps of the grand building get on, but the bus doesn’t leave. For this bus isn’t your average Cardiff double decker, it’s not about to take its weary passengers on a quick tour of the city or on to their next destination. It’s actually a lifeline for the city’s homeless called The Outreach Bus Project, which provides them with warmth, food and care.

25 people on average used this lifeline each night in 2011. Between December 2012 and April 2013 this increased to 30, prompting the question of how far can the bus’s services stretch?

The project is a multi-agency service run by the Salvation Army, the Police, NHS and Local Health Board. Five nights a week, 52 weeks of the year it provides the homeless in Cardiff access to simple things that many of us take for granted like hot food, clothing or maybe just a casual chat. It also offers advocacy, health referrals and needle exchange.

Outreach worker John William McInnes, from Newport, has worked on the bus for nine years. He dedicates his evenings helping the homeless. With over 15,360 families in Wales presenting themselves as homeless last year, that’s a lot of people needing help.

After years of working on the bus John has a tried and tested routine. He arrives on the bus outside the museum at 6pm where there’s already “quite an influx of users” waiting. John then separates some of the familiar faces to the new ones and makes referrals.

He also makes sure they have “something on the stomach to keep them going,” by making them some hearty cheese and ham toasties.

The bus stays at its unlikely stop until 9pm, although this depends if people need help. John explains, “If there’s a crisis we have to deal with it.”

The number of people using the bus proves how indispensable it is. In 2012 to 2013, 90% of homeless people in the city accessed it within 24 hours of sleeping rough. In total 5060 requests were made by 1618 users. Out of these requests, 1766 referrals were made to emergency hostels.

According to project manager Yvonne Connolly, more and more people are seeking out their help, “Every year, demand on our services continue to increase. We are seeing significant rises in service users with high mental health problems, complex needs and language barriers.”

John knows that his role is vital when those who have unexpectedly found themselves on the street, “They are new to us and we are new to them so the main thing is to make sure they’re safe. We make sure the most vulnerable get places.”

However, this time of year re-introduces a familiar enemy; winter. “With winters becoming harsher the need to minimise the potential for the homeless is paramount.” expresses Yvonne. Many of us struggle to fight off the crisp cold in December, yet many homeless people have no choice but to face it.

The project is very much aware of this. It is an integral partner in delivering the Cold Weather Provisions with Gateway and Cardiff Council, offering extra nightly shelter referrals made available in frontline hostels. In 2012 to 2013, a total of 783 people accessed the provisions, but it continues to rise.

How bad can it get?

In April 2013, the pressure put on the poor increase as the Government introduced the Welfare Reform Act. This cut the amount of benefit people received if they had an unused bedroom in their council or housing association home.

Yvonne believes that, “The impact of welfare reform and the changes within the welfare system are having a direct effect on our client group,” because it’s pushing many the poverty line and into homelessness.

In August 2013, Assembly Member Jocelyn Davies said,  “I am extremely concerned that by Christmas we are going to be at crisis levels. Just how bad does it have to get before the Westminster Government realises the devastation their policies are inflicting upon the poorest in society?” She says that she sticks by this statement.

Hoping to relieve some of the pressure put on the poor, the Welsh Government has recently revealed Wales’ first Housing Bill, which aims to help prevent the difficulties encountered by vulnerable people by improving housing standards and increasing affordability.

Whether this will actually relieve the pressure on the project is another debate. What is clear is that the bus will continue to support the homeless and vulnerable of Cardiff.  Yvonne is sure of it and has a vision for it to grow substantially, both in the number of users and also the number of services they offer. She wants to ensure that all users receive a tailored, holistic response to their needs.  However, Yvonne believes “with funding uncertainty, the future for a large number of frontline services is not very clear.”

So this December when you’re walking towards the bright lights and festive tunes of Winter Wonderland, take a minute to pause outside the museum and have a glimpse at the number of people waiting for their bus to arrive. How many people can you count?

John explains why the service is so important here

What other help is there? 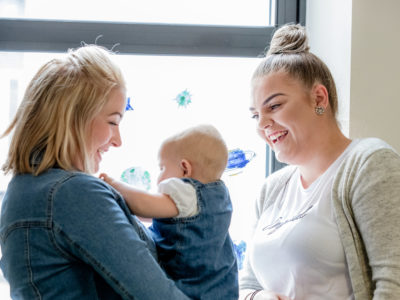 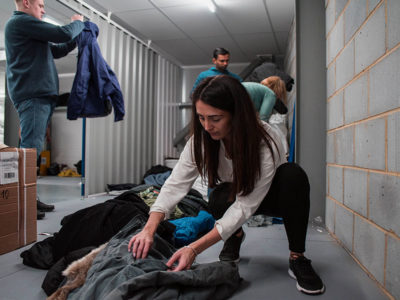