Sophie Bennett is not a name you may have heard of, but she’s certainly someone to keep an eye on in the management of Welsh rugby.

Sophie pictured inside the WRU National Centre of Excellence

As a young promising rugby player at national academy level in England, she progressed from playing at University to playing for Worcester and eventually Cardiff Quins, and subsequently landed a role at the WRU working with Wales’s elite female players.

“Playing for Quins was great, but it got to the point where I had to make a choice and I chose the job,” she says. Employment hasn’t stymied her active lifestyle though: “I was running marathons and doing a lot of road cycling, and now I’m into Crossfit. I train as full-time as someone can when they have a job like mine! I’ve always loved playing sport.”

Sophie’s job is certainly varied. She describes her role as the ‘women’s performance manager’, looking after the senior women’s squad and the pathways that a player may use to break onto the international scene, from regional rugby to Sevens and finally international XVs level.

“The other side of my job is to help coordinate the Colleges and Regional & National Age Grade Programmes in the men’s game and help administer the national academy; a group of players who have access to training and holistic support at the state-of-the-art facilities we have here.”

‘Here’ is the National Centre of Excellence (NCE): a base near Hensol in which the top international players are housed. Indeed, the Six Nation’s side will call it home during the 2013 competition. Strangely, though, Sophie tells of how sheer circumstance put rugby in her path. “I sort of fell into rugby. The wife of my colleague who I used to coach with played rugby, so we started a team and went off to university and got more heavily involved then. I got more and more involved in coaching there, and managed to get experience at Gloucester RFC, and was then asked to apply for the job I have now.”

So what was it that made her such an enticing prospect that she was headhunted for her role with the WRU? Volunteering, she says: “I always coached on the side of playing, and did as much as I could. When I graduated I kept coaching the University side, I threw myself into volunteering at Gloucester and for the RFUW.

“When a position opened up at Gloucester I stepped in and said I’d help until they found someone else, which was part time, then moved into managing the department after that. I never originally wanted this; I always saw myself as a PE teacher. But the more I grafted at it, the further I got.”

It is this determination and will to work that has made her the influential figure in welsh rugby that she is today. Indeed, as generations of talent come through the ranks at the NCE, it is thanks to the hard work and dedication of inspirational people like Sophie that these players exist at all. 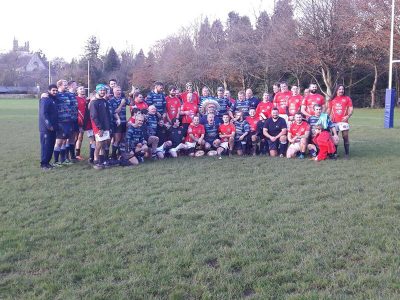