In depth: Social media for creatives

Social media ones to watch

Cardiff creatives are using social media to create new opportunities and display their work so here’s a few to watch out for:

@lucy_dickson – Lucy is an illustrator and designer based in the city.

@designbygemma – Gemma is a freelance graphic designer and wedding stationer based in Cardiff. 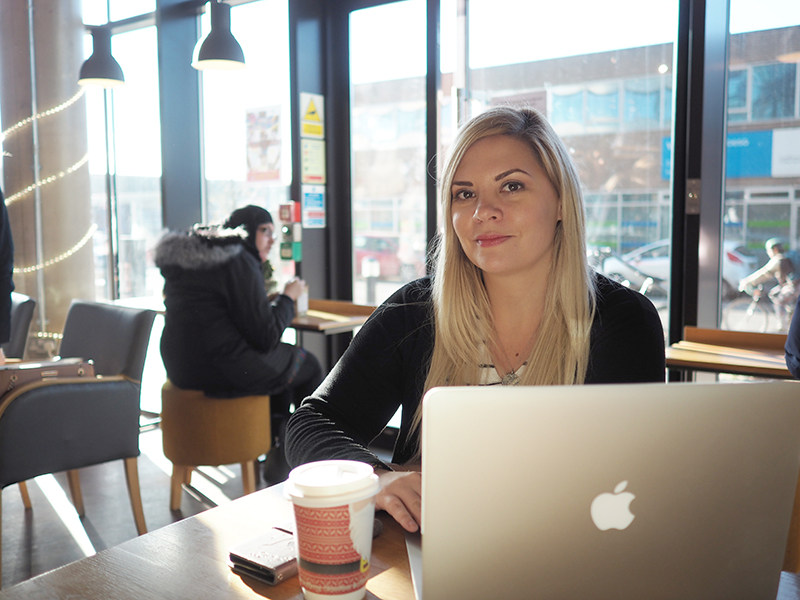 In a busy café nestled below a city college, Portia Jones, excitedly reveals that she will soon be leaving the events and marketing job she has held for the last three years.

Little over a year ago, Portia, 33, began to write her blog, Pip and the City focussing on lifestyle, food and travel and she will shortly be moving on to work on her blog and writing projects full-time. “If you had told me years ago that I’d get to write my own travel articles, I would have thought you were mad,” says Portia, smiling.

Portia’s experience of stepping away from the office environment into a new career path and self-employment is similar for many choosing to pursue creative careers in South Wales.

Cities such as London and Manchester have long been regarded as creative hubs in the UK, but social media and online platforms have now made starting digital businesses for creatives across the country more accessible. Statistics published by the Welsh Government estimate that up to 53,000 people work in the creative industries in Wales.

Research from Creative Cardiff’s identifies 2,788 creative organisations and freelancers in the city. To continue to encourage innovation and creativity in the capital, Creative Cardiff aims to connect people working in creative industries in the city from a variety of sectors but people are also turning to social media platforms in order to make connections.

Online careers and using social media as another work tool is a relatively new concept but one that many creatives are now finding crucial to create and find new opportunities outside of the typical office environment.

Liz Mosley, 32, a graphic designer from Cardiff, says her online inspirations are people like Instagram influencer and podcaster Sara Tasker (@me_and_orla). “It just shows that you can build your own life and career. I’m less interested in the big design agencies now and take more influence from people going out and doing their own thing online.”

The digital landscape has changed the way in which creatives are able to work, opening up many potential revenue streams. Liz runs an online stationery shop alongside her client-based commissions while Portia also writes for a range of websites to sustain a regular income.

“I’m less interested in the big design agencies now and take more influence from people going out and doing their own thing online.”

Portia says that while most of the money she earns from her blog comes through sponsored posts and social media campaigns, she makes sure to work with brands that feel like a good fit for her audience.

“People do say it’s really hard to make money but if you’re prepared to work hard and can demonstrate that you can create great content that adds value, brands will want to work with you,” says Portia. “If you’re able to go to blogging conferences and network with people, you can build relationships early on.”

Prior to her move to Cardiff, Liz says that most of her clients were referred by word-of-mouth. It wasn’t until she moved that she began to fully realise the importance of an online presence on social media.

“Instagram and Twitter are where I get most of my work,” Liz says. “When I’ve worked harder on my Instagram, I’ve started to notice a conversion. I can post a photo and get a few sales on my online shop, or maybe a request to design a logo, so it’s an area to invest in.”

As well as the wider audience for creative work now available online, the internet has changed the way in which the creative community can work together. Liz notes that when she was in college in the city, it felt like there was nothing going on creatively in Cardiff but now it’s completely changed.

“There’s a really nice, friendly community that has been so supportive,” says Liz. “Cath Jones (@sadlerjones) has launched the Monday club, a network for women in business in South Wales to meet up and support each other on a monthly basis.” As well as working in graphic design, Dan Spain is the founder of co-working space Rabble Studio located at Cardiff Bay

When Dan Spain, 31, a designer and illustrator from Barry found himself working from home as a freelancer, he decided to launch the creative network Rabble Studio, a co-working space located in Cardiff Bay where creative freelancers could apply for membership and create a space to exchange knowledge.

Rabble Studio is now working with Creative Cardiff to enable recent graduates to apply for free desk space for six months so that those considering freelance careers can get involved with a community, receiving mentoring and ultimately look to create their own careers. “I know when I graduated from university, the opportunity to be surrounded by successful freelancers who would be able to give me advice would have been invaluable,” says Dan.

Portia recognises that certain creative industries could have previously been hard to enter as it was crucial to have the right contacts but being online has changed that. “If you’re passionate about something, you can create your own career,” says Portia.

Sipping on her coffee, she reminisces about some of her career highlights so far that have come from blogging including a Game of Thrones themed tour of Northern Ireland which has all stemmed from hard work and networking. “It’s so important for people to be able to set themselves apart now. You can go out there and job hunt but we also have the ability to create our own opportunities.”

Social media ones to watch

Cardiff creatives are using social media to create new opportunities and display their work so here’s a few to watch out for:

@lucy_dickson – Lucy is an illustrator and designer based in the city.

@designbygemma – Gemma is a freelance graphic designer and wedding stationer based in Cardiff.