Sleep When You’re Dead is a tattoo studio and barber shop created by Matthew Pritchard of MTV’s Dirty Sanchez.

The studio is also home to John Smith, a tattooist who specialises in realist imagery and recently featured in MTV’s series Just Tattoo of Us, presented by Charlotte Crosby and Stephen Bear. 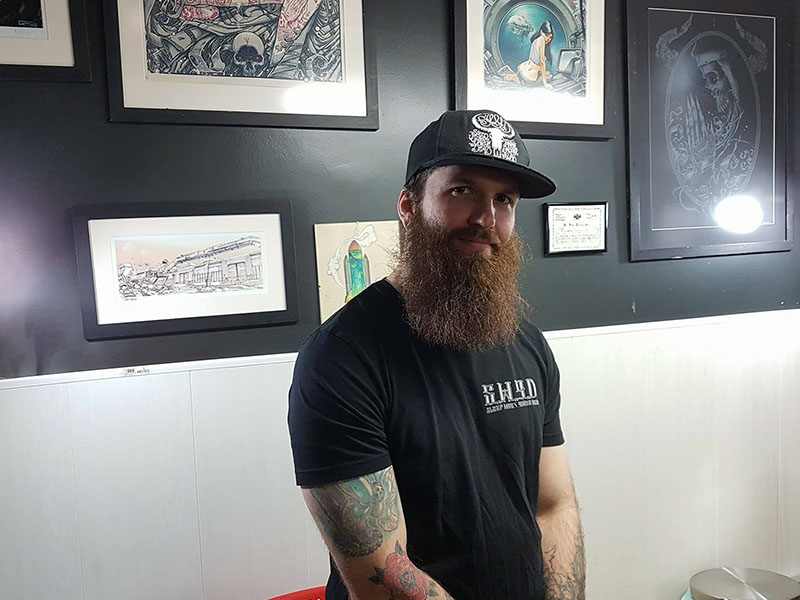 Aaron Usher after completing his first tattoo of the day

With Cardiff listed as one of the most inked cities in the UK, tattoo artist Aaron Usher explains how he entered the beautiful and mildly-painful world of body modification.

With over half of his body covered in ink, 33-year-old Aaron holds a chair in one of Cardiff’s staple tattoo studios Sleep When You’re Dead.

“When I was younger I didn’t even like tattoos that much,” he said. As a naturally talented illustrator, Aaron originally wanting to become a comic book artist until at 14 he was asked to design a tattoo for his uncle. After watching his art being transferred onto skin, he quickly decided to trade-in his colour palette for a tattoo gun.

Underage and determined to become a tattooist, Aaron began tattooing and eventually found an apprenticeship in Bridgend. After refining his skills behind the needle he moved to the capital for work, shifting from shop to shop before finally setting up shop with the ‘hot-heads’ at Sleep When You’re Dead in the High Street Arcade.

With seven years of experience under his belt, he aims to better himself as a tattoo artist, and hopes to learn more about specific styles and techniques from other artists through guest spots in their studios. Aaron tattooing a coffee cup onto a kneecap

My fiancée wants my pretty mug for photos
Amidst plans to cover his entire body in ink, Aaron currently sports a collection of random tattoos, including a jellyfish swimming inside a light-bulb on his leg and a zombie holding a paintbrush on his scalp. However, he maintains that he is still not used to the pain of tattoos. “People think that tattooists are able to hack the pain – we’re fucking wussies,” said Aaron. His future plans include covering the rest of his head with a watercolour paint palette design and he hopes to get a portrait in tribute of TV art instructor Bob Ross.

In what he calls a “sparks-flying moment”, Aaron met his wife-to-be while working in a parlour on Queen Street. With wedding bells looming in the distance, he has (reluctantly) decided to postpone any future face ink until after the wedding. He said, “The only reason I’m not allowed to get my face tattooed at the moment is because my fiancée wants my pretty mug for photos. My attitude is that my mug is pretty even if I have tattoos but it’s best to keep the bride happy.”

A dickhead no matter what happens
Despite some people still believing that tattoos are for criminals and thugs, Aaron maintains that ink should not be a cultural taboo and hopes that in the next decade tattoos will no longer be an issue within society. “Me having a tattoo on my head doesn’t change my personality. My hands don’t change my personality. I’m a dickhead no matter what happens – I’m a funny dickhead, but I’m a dickhead.”

He continued, “If you got absolutely covered from head to toe in tattoos you’d be exactly the same person. Ink doesn’t change you – you change you.”

Examples of Aaron’s tattoos can be found on his Facebook page.

Sleep When You’re Dead is a tattoo studio and barber shop created by Matthew Pritchard of MTV’s Dirty Sanchez.

The studio is also home to John Smith, a tattooist who specialises in realist imagery and recently featured in MTV’s series Just Tattoo of Us, presented by Charlotte Crosby and Stephen Bear.