Nathan has used many materials in his time.

Love him or hate him, Simon Cowell in Marmite

Rylan Clark using fake tan, the material Wyburn says is his favourite at the moment

When an artist paints a portrait usually they simply create an image, but Cardiff-based artist Nathan Wyburn involves his subject’s whole persona by choosing materials and techniques related to their best-known qualities.

In his studio, Wyburn recalls the headache he got from staring at his tongue for so long

Though he is known for his use of non-traditional materials, from marmite to fake tan, his most recent portrait was of Miley Cyrus and painted with his tongue, inspired by Cyrus’s own inability to keep her tongue in her mouth.

The 24-year-old is composed, the rain hasn’t even affected his curly hair, and he doesn’t hesitate when asked to explain how he got into art, “It’s always been portraits for me like faces sort of fascinate me, how basically as soon as you get someones eyes right I think you can tell exactly who they are.”

While people can be identified from only their eyes, they can also be identified through what stereotypically defines them, and this is what Wyburn demonstrates through his art.

What initially brought Wyburn into the public eye was his marmite on toast portrait of Simon Cowell. Already bored with traditional materials, the idea to use marmite instantly came to him after reading an article about how you either ‘love or hate’ Simon Cowell.

You might think he was just messing around with his breakfast but he has since progressed into more controversial territory; His 10-foot tall portrait of Rupert Murdoch, made up of six thousand photographs of phone hacking victims, made it onto the front page of the Guardian.

Where he is now

His studio is the not the mess you’d expect from someone who paints with their tongue. Miley Cyrus’s portrait is still on the wall where he painted it, but what you couldn’t see in the video is the picture he was copying and it’s astounding how exactly alike they are.

He assures me that it took longer than the youtube video gave away but even with a break every ten minutes (for a tongue rinse) he is undoubtedly talented, “This is sort of where I have an odd understanding of portraits anyway and I look at an image and it’s almost like a photographic memory, it’s difficult to explain.”

He is confident; not arrogantly so, but it’s easy to tell he has a strong belief in what he does as he explains the way his portraits work, “They take things like stereotypes, what they [the celebrity] are best known for, then basically say ‘This is all that you are now, you’re almost like a commodity’.”

It’s a strong statement to make and the possibilities for materials seem endless. He has been commissioned to make a portrait out of human hair for Movember, his excitement is obvious as his eyes light up while he tells me, “There is literally no limit to what I’ll try, whether it’ll work is a different thing.”

Though he insists, “I never give anything away,” laughing as he apologises, “sorry!” he does say that he is planning on doing a series of portraits of his favourite artists. The two he mentions specifically, Damien Hirst and Tracey Emin, are most known for their portrayals of death and sex respectively, which he hints may result in something, “Quite different from the playful stuff that I’ve done before.”

Nathan has used many materials in his time.

Love him or hate him, Simon Cowell in Marmite

Rylan Clark using fake tan, the material Wyburn says is his favourite at the moment 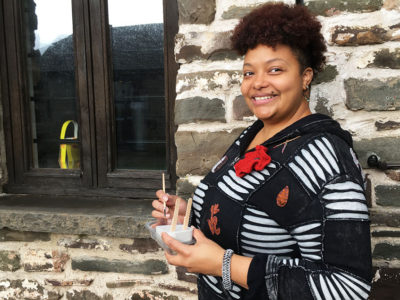