The Moon bar continues to rise from the ashes of its predecessor as Womanby Street boasts heaps of local talent this October.

The bar, formerly The Full Moon, relaunched last year under a new non-profit organisation, reviving Cardiff’s platform for non-mainstream musicians and striving to provide a safe space for everyone.

Every month there are events for adults affected by mental health, earlier this month LGBTQ+ singer Grace Petrie was performing and there was a rock fundraiser in aid of the homeless.

Kelly Keegan, 33, who runs her own Music Bingo from the venue said: “I just like the variety here, it’s not really homogenous.”

She explained why independent venues like The Moon need to invest in the arts and said: “It’s important that venues take that upon themselves to keep us in the fold of progressive art and culture.”

Kelly, who’s also an English teacher, acknowledged The Moon’s inclusivity, pointing over to her own girlfriend.

The bar is a safe space for everybody, irrelevant of sexuality or gender and, on the website, directs women to the “Safe Gigs For Women” site.

The Moon’s Free For All Festival, which took place earlier this year (and in previous years at former venue The Full Moon), aims to draw in support for the city’s local scene.

With this year’s event having brandished an explicit “use it or lose it” attitude, The Moon’s music home stands strong, resurrecting The Full Moon with a bang in the wake of its closure.

Oxjam, Oxfam’s annual music festival, is also set to run from The Moon later this month.

Supporting the city’s independent venues, the event promises to bring alternative to Cardiff and the music scene to Womanby Street.

When asked about the bar’s decision to relaunch, manager Carly Curtis, 35, said: “We love the place, Cardiff needed a music scene.” 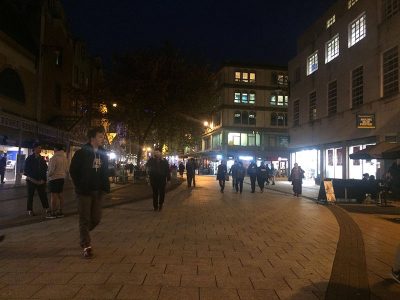