Home > Food > In depth: Are vegans taking over?

In depth: Are vegans taking over?

Vegans are increasing but are they taking over? The 100% vegan store is home to a fresh vegan bakery. From raw juices to chocolate, a variety of vegan health supplies can be found here. Beanfreaks own three stores in Cardiff. This roaster sells a range of dairy-free milk alternatives to add to your coffee. 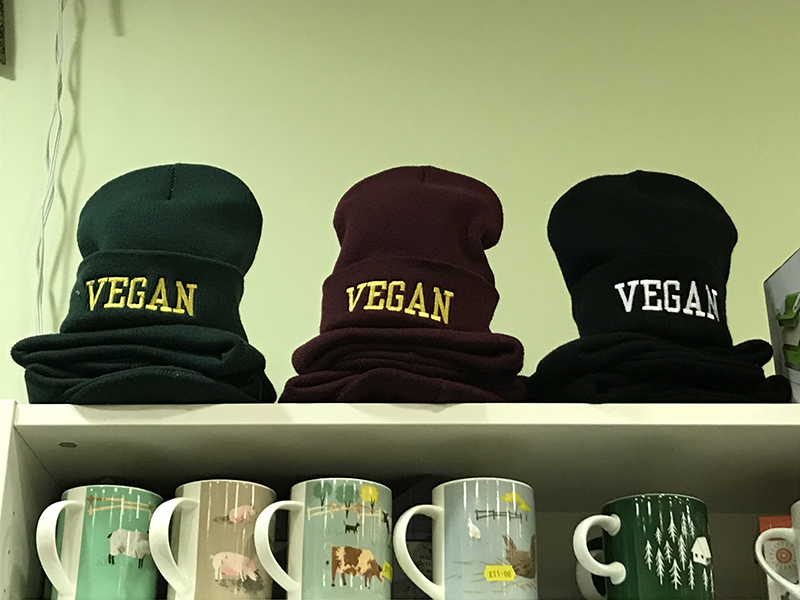 Eating the vegan way seems to be increasingly popular but is veganism becoming the mainstream diet choice in Cardiff? Vegan eateries and festivals are increasing to cater for the increased vegan demand.

Most of us have heard of Stoptober but now Veganuary is heading our way. While the national, 28-day stop smoking challenge aims to help people quit smoking, Veganuary encourages people to take up being vegan by trialling it during the first month of the year.

Plus, there is not only an annual World Vegan Day on 1 November but a whole World Vegan Month dedicated to celebrating and promoting veganism. But is this getting out of hand? Are vegans taking over Cardiff? There are now three and a half times as many vegans in Great Britain compared to in 2006. One percent of the Welsh population are now following a vegan diet.

The amount of people adopting a vegan diet is increasing. In 2016 The Vegan Society found there are over half a million vegans in Great Britain while the Food Standards Agency estimated currently 1% of the Welsh population follow a vegan diet. There are at least six ‘vegan-only’ stockists in Cardiff and more than nine establishments labelled ‘vegan-friendly’.

Owner of Cardiff’s first and only 100% vegan cafe, Anna Loka, Adam El Tagoury said: “Every January there seems to be another influx of vegans because people try Veganuary.”

“Every January there seems to be another influx of vegans because people try Veganuary.”

He found many people maintained being vegan after doing it for a month.

In addition to vegan trials, specialist social media groups could be influencing the growth of the vegan scene.

Cardiff Vegan Meet Ups, otherwise known as VEGANS ASSEMBLE, is a private Facebook group for herbivores who organise monthly meetings at vegan-friendly destinations in the city. There are 795 members including 45-year-old Nigel Bernard who has been vegan for five years. Nigel said: “Groups like this give you a chance to mingle with like-minded people and can act like a support network so you don’t feel so alone.”

With veganism on the rise, vegan-friendly festivals and eateries are popping up in Cardiff to cater for this. So, are vegan establishments increasing in response to this demand or are they influencing it?

Leading vegan charity Viva! hosts 10 vegan festivals per year and already has six lined up for 2018 with the next Cardiff Viva! Vegan Festival taking place on 24 February.

Viva! campaigns for a vegan world to stop animal suffering, protect the environment and improve health.

Festival and events manager for Viva!, Sophie Delarny, explained: “The boom in the vegan market means that vegan festivals have also exploded.”

She claims 70% of attendees to Viva!’s festivals are vegan or vegetarian.

At Cardiff’s 2017 festival 50% of people were vegan and 15% said they would change their diet following the event.

“They’re a great place for non-vegans to come and learn about veganism in a positive way,” Sophie added, “people love attending an event where they can be surrounded by people who share their beliefs.” More supermarkets are selling vegan-friendly products such as Sainsbury’s Free From range.

Adam is also responding to the larger vegan market. He explained he could see a need for vegan food which is why he opened his cafe in Roath.

“You only have to go to the supermarkets now to see how many vegan products are being stocked on the shelves,” he said, “I think the demand is there now.”

Adam said eating out was the most challenging part of being vegan.

“For me there was nowhere decent for vegans in Cardiff,” he added.

Since opening Anna Loka in August 2015, he revealed they have been progressively busier and are fully booked most weekends. More than half of his customers are also now vegan.

“Many people come back and say ‘We have been vegan since coming to your restaurant,’” he said.

However, Adam believes there is still a need for more vegan eateries and ethical establishments in the city.

A combination of increased awareness of the meat and dairy industries, the health benefits a vegan diet can provide and sustainability are further reasons more people are becoming vegan.

Viva! aims to make people aware of the “unnecessary brutality” of the meat and dairy industries and how it is beneficial for ourselves and the environment to live without these products.

Sophie explained: “More and more people are waking up to the reality of these issues and why it’s so important. They are absolutely the reason people are going and will stay vegan.”

According to Adam sustainability is also playing a major role in the rise of veganism.

He said people are realising world starvation is due to people following a carnivorous or omnivorous diet.

“Just to get a pound of meat takes up an obscene amount of water, resource and soya which could actually feed so many starving people in this world,” he added.

Meanwhile, Nigel has noticed the health benefits of a vegan diet.

“My health has improved dramatically,” he said, “I used to have no energy whatsoever and since then [becoming vegan] I have been able to take up a bit of running, not because I wanted to get fit but because I felt like I wanted to do something to burn off the extra energy.”

Find out what people in Cardiff think of the increase

Vegans are not taking over … just yet

There is no doubt the number of vegans and vegan venues in Cardiff have expanded due to social media, public awareness and Veganuary but it seems a demand is still there. The vegan diet has not yet become mainstream.

Sophie added: “There has been a dramatic rise in the past two years, but we must remember we still have a long way to go as vegans are the minority.

Vegans are increasing but are they taking over?

The 100% vegan store is home to a fresh vegan bakery.

From raw juices to chocolate, a variety of vegan health supplies can be found here.

Beanfreaks own three stores in Cardiff.

This roaster sells a range of dairy-free milk alternatives to add to your coffee.