Home > No logo > In depth: How spiritual is Cardiff?

In depth: How spiritual is Cardiff?

Book a yoga weekend on the cliffs of Pembrokeshire in the new year through Cardiff yoga studio.

Tea meditation: transforming making a cuppa into a meditative practice.

Go for a walk (and check out Frédéric Gros’ philosophical book on the benefits of walking).

Check out the new series Simply Nigella to find out how cooking can make you slow down and feel great.

There have been numerous spiritual events popping up in Cardiff recently. Do these reflect the capital’s growing interest in spirituality?

In a world governed by social media and smartphones, spiritual practices like meditation and yoga are becoming more popular, providing a nice counterbalance.

On November 20, Cardiff Buddhist Centre hosted an event as part of Inter Faith Week, including talks by several Buddhist traditions on the theme of “Buddhism In Everyday Life” – a style of Buddhist practice adapted to the time we live in. One month before that, vegetarian café and spiritual centre Atma celebrated its new location in the city centre. Part of the International Society for Krishna Consciousness in Wales, Atma offers meditation and yoga sessions.

Getting acquainted with spiritually approved food

Spirituality is a broad concept that can be interpreted in many ways. In general, it involves a sense of connection to something bigger than ourselves. Unlike religion’s emphasis on what is true and right and on punishment for those who disobey, spirituality values finding meaning and connecting to your Higher Self.  Instead of separating from other religions, spirituality acknowledges the truth in all of them.

Census material from 2011 doesn’t yet have a cateogory reflecting spiritual groups in Cardiff, but figures do reveal that the amount of people who said they have “no religion” rose from 18.8% to 31.8%. Although Christians still make up the biggest religious group, the percentage of people who describe themselves as such fell from 66.9% to 51.4%. The number of Buddhists, Hindus, Muslims and Skihs in the city all increased from 2001 to 2011.

Padma Simha (55) is a teacher at The Cardiff Buddhist Centre who first encountered meditation 25 years ago. He says there has been a 10% increase in participation from people in his meditation sessions in the last two years. In his opinion, people are much more receptive to alternative spiritual practices as there is a growing need for this on both an existential and psychological level. He describes Cardiff’s spiritual scene as a vibrant and open one and speaks of a growing community.

Jiva Henderson (25), yoga manager at Atma, also speaks of an increase in interest and sees more participants every week, especially for the popular Kirtan yoga sessions, involving musical mantra meditation. “For a small city, people are open minded here,” she says. She notes that the Hare Krishna community is quite strong in Cardiff compared to cities of a similar size, due to having a strong community leader.

The Spiritual scene on a regular day at Atma

The leader of the Welsh Hare Krishna movement Terry Anderson (59) goes by the spiritual name Tarakanatha das; a Sanskrit name. Originally from The Valleys, Terry took his vows to be a Hare Krishna devotee in 1990. He doesn’t eat meat, fish or eggs, doesn’t drink or have sex outside of marriage and doesn’t gamble. His role involves engaging in spiritual practices daily and he is also part of UK ISKON management council. For him, spirituality is a lifestyle, not something you try to make room for in a busy schedule.

Given the flurry of activity around shops in Cardiff at this time of the year, can you be spiritual and enjoy Christmas shopping at the same time? Yes, as long as you remember the essence of giving and receiving, according to Anderson. He explains it’s a challenge to be in the world and not become worldly minded and materialistic.

Anderson notes that Cardiff is a multi-cultural place that has become increasingly receptive to yoga over the past few years. However, he questions whether people are understanding the real purpose of it. Most people practice yoga to stay in shape and be healthy, but he points out that the ultimate purpose is to connect to yourself, as the body is temporary.  On the topic of mediation, he observes that everyone does it, as we all focus our minds on different things: “Some people meditate their whole life to become rich. That’s a form of meditation.”

“Some people meditate their whole life to become rich. That’s a form of meditation.”

When discussing mindfulness, often seen as a way of cultivating spirituality, he says that it deals with a symptom, not the problem: “It’s just a temporary relief – we’re looking for a more permanent solution.”

It seems that spiritual practices are becoming an increasingly accessible way for many people to get in touch with themselves amidst the pressures of everyday life. Perhaps because they lack certain rules and the heavy weight ascribed to religions, spiritual centres in Cardiff are attracting more people willing to give it a try. Who knows? The city might be on its way to becoming an interesting mix of yogis and rugby-lovers.

Book a yoga weekend on the cliffs of Pembrokeshire in the new year through Cardiff yoga studio.

Tea meditation: transforming making a cuppa into a meditative practice.

Go for a walk (and check out Frédéric Gros’ philosophical book on the benefits of walking).

Check out the new series Simply Nigella to find out how cooking can make you slow down and feel great. 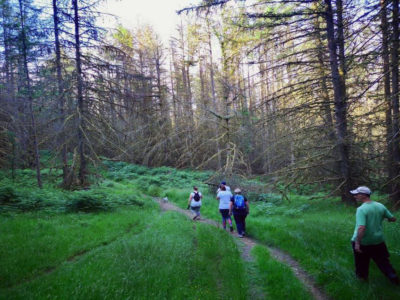