Stayed tuned for Kat’s official new website on the 17 November too!

Find Kat at Anna Loka on Friday mornings from 7:30-8:30 with a reggae soundtrack:

Manju jois a yoga hero for many and an advocate of the ancient styles of yoga. 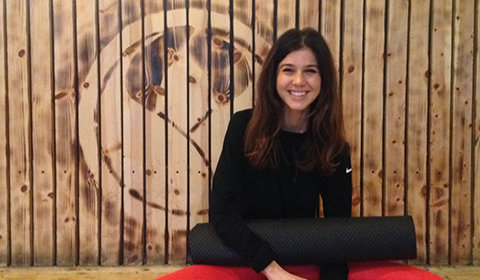 Mental health disorders affect 25% of people in the UK in any given year and this is just one of their stories. Suffering with acute anxiety for a decade and a half, Kat Pither found inner calm when she took up yoga a few years ago.  This yoga hobby quickly became Kat’s day job which she’s spent the last 18 months defining.

Kat aimed to teach yoga differently, quirky like her personality. Originally from London, Kat migrated capitals after falling in love with a Welsh boy. Giggling, she knows she can’t leave now, her fox red Labrador – ­Woody – would have something to say about that. Yogi Bare, Kat’s brand, was inspired in the face of elitist yoga groups which she attended during her recovery.

“It’s just a stretch,” she exclaims.

In her yoga room, whether that be a studio or coffee shop, Kat wants her clients to feel comfortable and relaxed. Hence the hip hop and reggae playlists.

“I got a backlash for doing yoga to hip hop,” Kat confesses. “Hip hop and rap have the same motivation as yoga, to express ourselves,” she explained. Her reggae playlist, however, is all about a healthy body feeling. “There’s a reason behind everything I do,” Kat gushes.

Anxiety recovery
At just 11 years old Kat started to experience feelings of anxiety. To start with it was just a strange feeling that something bad may happen. “I never fully understood,” she says with honesty.

“It sounds all doom and gloom,” she laughs “it’s just at 11 I didn’t think good things could happen to me.”

This fear developed into an eating disorder which lasted for 12 years. Both worked in conjunction to create a vicious circle. “The two are very much linked,” she states matter-of-factly.

Doctors were consulted and sessions of therapy were undertaken to combat these mental health problems, but medicinal treatments just did not work for her.

Then Kat stumbled across yoga. In Tommy Rosen’s book, Recovery 2.0, yoga is recommended as a way of combating addictions, like Kat’s eating disorder. From here, her anxiety waned. The yoga years
Kat’s had many privileges in her career but working with Manju jois was “a real honour.” Manju’s father brought Ashtanga yoga to the west. This type of yoga embodies the principle that yoga is just a stretch.

That is just one of Kat’s mantras. Clients are also reminded that, “The body is like a naughty teenager,” and like a teenager yoga shouldn’t be forced. Kat advocates this freedom, “You can just rock up.” Her classes aren’t restricted to a pre-booking system.

Kat’s now looking towards the future with some super-secret announcements, but here are some we can share. Kat will be making an appearance on the 4 and 5 of November at Brickstock where she will launch Yogi Bare Cubs which aims to build a generation of confident young people.

Stayed tuned for Kat’s official new website on the 17 November too!

Find Kat at Anna Loka on Friday mornings from 7:30-8:30 with a reggae soundtrack:

Manju jois a yoga hero for many and an advocate of the ancient styles of yoga.

The morning yoga class with Dippy the Diplodocus at the National Museum
A relaxing afternoon at the cinema to watch Judy, for people with dementia
Share