Albert, 2016. Courtesy of Anthony Rhys. Similar portraits of characters will appear in Notorious. Anthony Rhys visits the archives every chance he gets.

An artist, writer and teacher delves through the depths of the glamorgan archives discovering some of Cardiff’s most infamous streets Anthony searches through the Glamorgan Archives.

Despite a long day of searching through the Glamorgan Archives, Anthony Rhys remains as enthusiastic as ever when asked to explain why he was visiting.

He has been searching through police court archives as research for his book.

Most visitors and residents of Cardiff are aware of the city’s redevelopment over the years but few know of the story of Charlotte Street and Whitmore Lane.

Anthony says “I’m surprised nothing has been written before about it. People know about Bute Street as an area of prostitution. But these streets were before Bute Street, this was the first redlight area for Cardiff.”

Anthony explains, “It’s not a story that’s been told about Cardiff and I think that’s because Cardiff has been quite successful in getting rid of them (the two streets).”

Anthony first came across these two streets 13 years ago when he discovered one of his relatives lived on Charlotte Street.

Since then Anthony has been busy.

Seven years ago he started painting portraits of the people he researched. Very dark and horror filled. With people screaming in aguish or gritting their teeth in anger.

Anthony has had three solo shows in Carmarthen, Penarth and Merthyr Tydfil, as well as entering the National Eisteddfod and winning a prize.

About two years ago Anthony returned to the archives to do research for another art show.

However according to Anthony: “I was intending on just doing 30 portraits of characters from Charlotte Street but as I researched I found more and more about them. I realised there was pretty much a whole book that I could write just about these two streets.”

“Lots of them fall into poor health and die, others move away.”

Although Anthony is a hardworking teacher he still finds time to visit the archives during the holidays.

Charlotte Street and Whitmore lane were notorious as they were full of prostitutes, brothel owners and thieves.

Over the past two years of researching for his book Anthony has really go to know these historical figures.

One of his favorites is Mary the Cripple, “She had lost use of her legs since birth. She worked in prostitution for around 40 years buying her own houses on Whitmore Lane, if you were disabled during victorian times you didn’t have much chance other than charity. She really was a rough old woman.”

Anthony is particularly attracted to the victorian period as he feels it was the start of Cardiff’s history.

Anthony’s book Notorious is set during a time of Cardiff’s expansion from a small town in 1840 to one of the world’s largest ports in 1870.

However the book really follows the lives of 30 people.

Anthony explains; “It follows their lives as they start working on the street and when they get arrested. Lots of them fall into poor health and die, others move away, some get transported to Australia because they have been arrested too many times.”

Notorious is in the last few stages of writing and Anthony will soon be looking for a publisher with the aim of releasing next summer.

Albert, 2016. Courtesy of Anthony Rhys. Similar portraits of characters will appear in Notorious.

Anthony Rhys visits the archives every chance he gets. 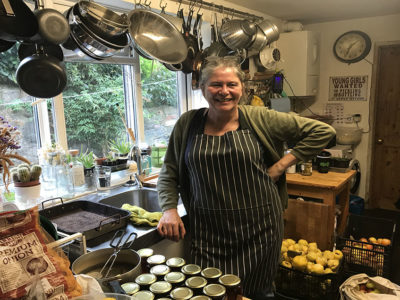