Cliff Collings at his drum set

Cliff in his own words:

Describe yourself – An energetic, enthusiastic, madman who knows how to play the fool just as well as the prince.

One Thing I should get rid of – My ego. Most of the time it’s well behaved, we have a good working relationship.

My Go to Music – “Lateralus” by a band called Tool 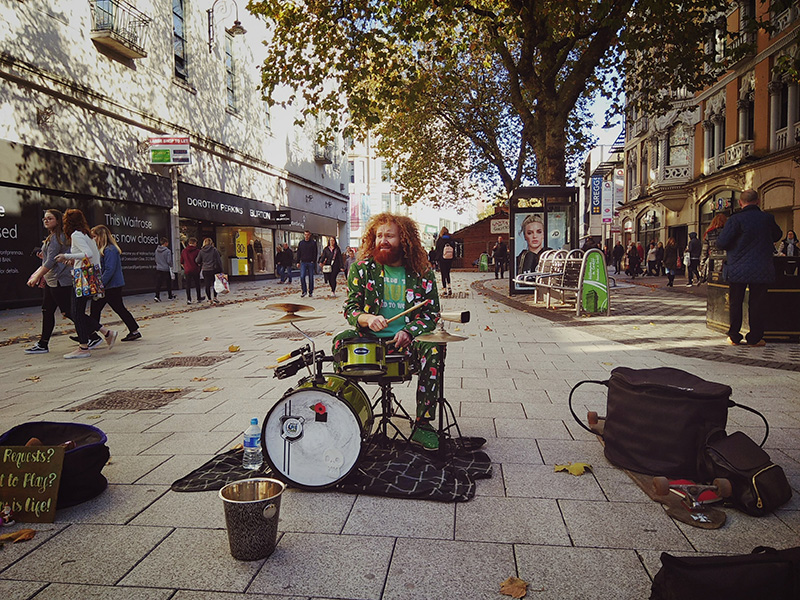 See life through the busker’s eyes as he explores some of the highs and lows in his life, on a regular day in Queen Street As he sat in his usual spot in Queen Street Cliff Collings said that he has been drumming for 16 years and took it up as a career only 15 months ago when he started busking in Cardiff. However, the 32year old busker, takes an active interest not only in music but in gaming, reading, meditation, reiki and yoga among other things. Most recently his eagerness to challenge his mind and body has led him to take up cold training using the wim hof method.

Sitting at his drum set, dressed in his trade mark green suit contrasting his mass of red hair, he confessed that the suit attracted a lot of attention. It contributed hugely to getting his audience interested. Green is his favourite colour and he bought it when he was 30 to wear it to Disneyland, Paris in a Peter Pan fashion, to indicate his childishness and youth despite aging. Since then it ended up being a part of his performance character. He added jokingly, “Plus it suites red heads well and is the colour associated with the heart Chakra.”

However, Cliff’s vibrant personality does not mean he has not had some rough phases in his life. The separation and loneliness one feels when a childhood group of friends disband is tough to deal with. “It seems to be a social norm”, said Cliff, “to give into a 9-5 Job, relinquish your true goals and give up chasing your happiness. It was also tough losing one of my best friends to cancer.

“It was also tough losing one of my best friends to cancer.”

While Cliff feels very strongly about a lot of social issues, he particularly sees one being hugely ignored. “From a young age I was aware of this crisis,” said Cliff, “I remember crying to my parents at the age of 6 about a man having to sleep outside in the cold.”

The problem of homelessness, according to Cliff, has grown a lot worse since then. He feels that the fact that people are left in the streets to beg and rot, resembles “our corrosion as a society”.

On a nicer note

When asked if he believed in God, he said that he didn’t subscribe to the traditional idea of god but believed in the existence of a universal consciousness that weaves everything together. According to him everyone has the right to be “happy, loved and well”. He draws from different religious texts to add value to his idea of worship and is particularly fond of Taoist teachings. Cliff’s idea of love has many aspects, but the most important one is the love for oneself, which when found makes it possible to truly love all others. According to him, “Love is a complete roller coaster that makes colours more vibrant and sounds more crystal. If one could surrender to it, nothing else would compare.”

In future he wishes to develop his own centre for holistic therapies and music for all people.

“I want to render homelessness in Cardiff”, said Cliff, ”as a thing of the past and spread that teaching like a friendly plague to all the cities of Wales, then further afield.

Cliff Collings at his drum set

Cliff in his own words:

Describe yourself – An energetic, enthusiastic, madman who knows how to play the fool just as well as the prince.

One Thing I should get rid of – My ego. Most of the time it’s well behaved, we have a good working relationship.

My Go to Music – “Lateralus” by a band called Tool

Oindrila Gupta
I am a Literature graduate in love with words, currently pursuing Magazine Journalism at Cardiff University. My hobbies include music, theatre and reading. I have a penchant for all things vintage, handcrafted papers, and hibiscus tea. I’m a nyctophile at heart and find pleasure in the work that I do. Some of my other works can be found on Icy tales and pearlsonathread.wordpress.com