For more information on Calan’s tour dates.
To see Calan playing watch the video below 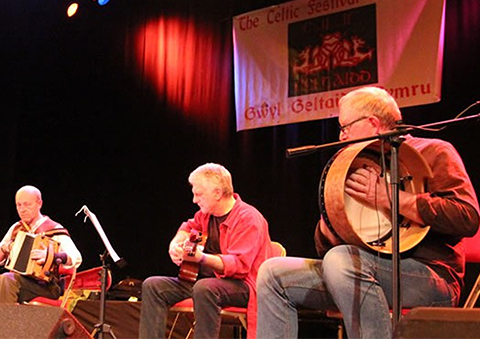 Cwlwm Celtaidd are hosting a concert on the 25 November to promote next year’s Wales Interceltic Festival. This concert is taking place at the BBC Club, Llandaf, Cardiff, on Friday 25 November. The venue opens at 8pm and tickets are £10 on the door. For those worried the event will sell out, tickets can be booked over the phone too.

Sarah Smith, one of Cwlwm Celtaidd’s co-founders, says she set up the event to, “Promote young folk musicians and give a platform to traditional Welsh artists.” Another promotional event will be taking place in the new year.

Sarah also revealed that Calan, the popular, young, traditional Welsh band, will be playing at next year’s Cwlwm Celtaidd Wales Interceltic Festival. The festival is a family friendly weekend of song and dance, displaying the best of the Celtic music from Wales, Ireland, Scotland, Isle of Man, Cornwall and Brittany.

Patrick Rimes, one of the four members of Calan, says the band uses the pibgorn as a leading instrument. The pibgorn is a wooden reed, and traditional Welsh instrument, rarely used by bands. However, he clarifies this isn’t a gimmick. He says the band decided to use traditional Welsh instruments because they sound, “kick-ass”. Their music also features authentic Welsh clog dancing, despite the fact it’s thought of as traditionally Irish.

Sarah Smith says the remaining acts for the 2017 Wales Interceltic Festival should be released in the coming weeks. It will be taking place from Friday the 10 March to Sunday the 12 March 2017, at the Grand Pavilion, on the Porthcawl seafront.

For more information on Calan’s tour dates.
To see Calan playing watch the video below