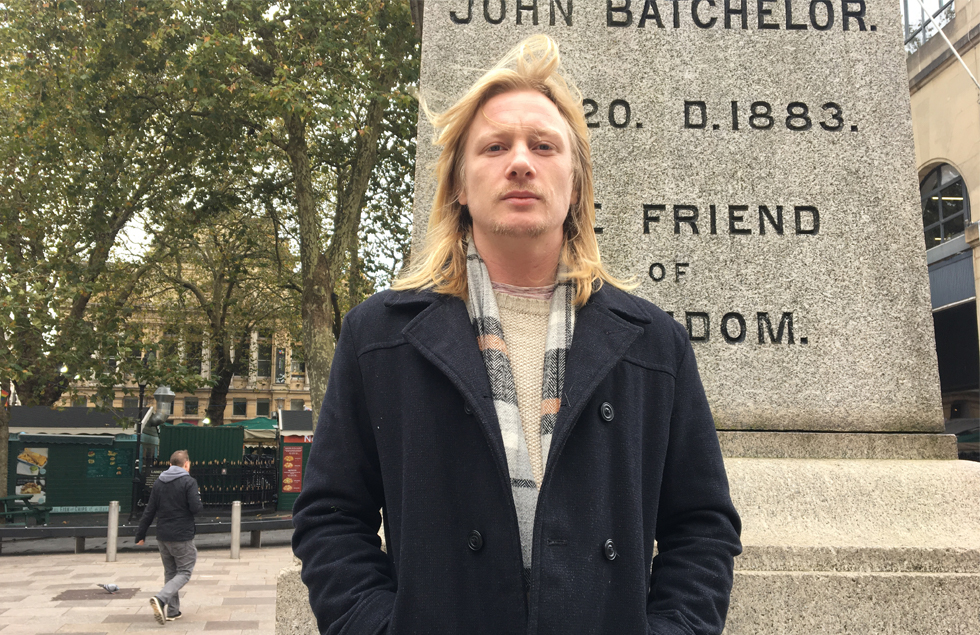 Martin Jones, 29, came to Cardiff two and a half years ago and started busking. A carpenter by trade, Martin knew it wasn’t his destiny.

“I gave my tools away, sold my van to my stepdad and came over with my guitar and I’m still here,” he says.

This follows the news that a Haverfordwest busker who was slammed in a recent letter which described him as “tone-deaf” and “bellowing,” has praised the wave of support he received from the people of Pembrokeshire.

Enthusiastic and approachable, the Cardiff busker spoke of how nervous he felt busking for the first time, usually going for a couple of pints before his first few times to build courage. “It’s not like a gig where people are expecting you,” he explains.

“Many give up after the first time, but it’s the most rewarding thing you can do.”

Connecting with the public

Martin’s made quite the fan base and great friends through busking. Humble and grateful, he connects with the public. “I met this 60 year old woman, I call her my angel,” Martin said.

“She saw me about a year ago, she’s supported me with my career and music and we’ve become really close friends.”

The recognition buskers and street artists get has increased according to Martin. “It’s beautiful for the city. I never thought of buskers negatively when I passed. I thought ‘Fair play’ and I wanted to be like that.”

“No one wants to listen to Ed Sheeran Shape of You for four hours,” Martin said, as he wants what is fair for the public and the shops surrounding him.

“No one wants to listen to Ed Sheeran Shape of You for four hours.”

The only downfall to Martin’s job is when he can’t do it, because of the rain or if city regulations are too strict. “Buskers will have different opinions about busking but I genuinely do love it.”

Martin busks as many days a week as he can, and explains that he can live off of that income for a few days before going out and busking again.

Busking as a career

“For some it’s just publicity and some money for the weekend, but for me it’s a career,” Martin states.

Throughout Martin’s busking career there has been a particular moment that’s stuck with him. “A little kid with Down’s syndrome ran up to me and he hugged me for two songs,” Martin explains.

“The parents were watching and crying because he felt connected to me but didn’t even know me. That is probably the most beautiful thing that’s happened.”

He’s also had a life-changing moment, “I was singing my song Energy and a woman put a piece of paper in my case. I thought she’d given me her number. I think she was around 27 and I opened it.

“The letter said she had just found out she was dying and for that moment I put her at ease. She said I had this gift to put people out of their misery. Since then I have had a completely different mentality.”