Justin Oldham stands behind an interesting painting at Valkyrie tattoos

Chris has been tattooing for 17 years and is self-taught. He got his first tattoo when he was 19 which is a Chinese symbol saying ‘Evil’. Naomi was previously an illustrator but soon swapped her drawing pen with a needle. She has been tattooing for 3 years and has one tattoo which covers the majority of her back. 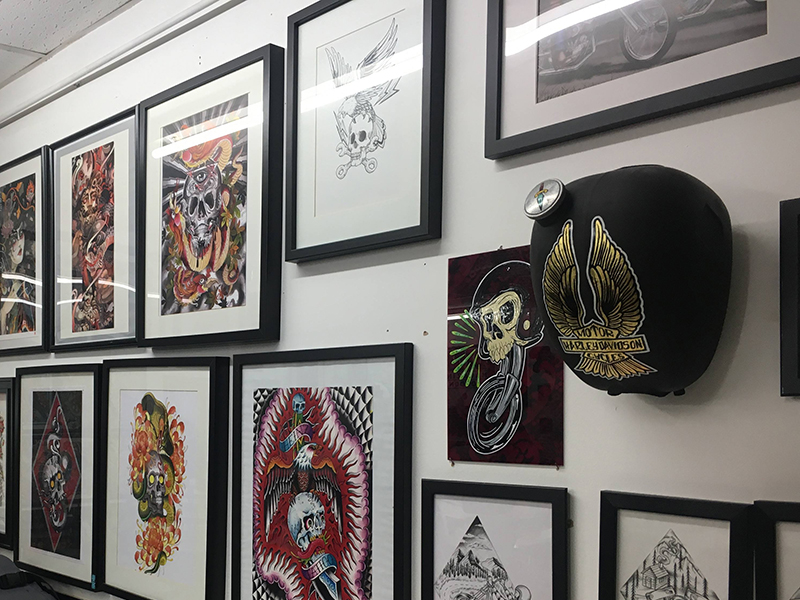 The tattoo industry in Cardiff is booming, but are there surprising reasons for going under the gun? More people are choosing to go under the gun, with Cardiff now having over 48 tattoo parlours, compared to just 3 in 1994. The pressure for tattoos to be more individual is increasing, as too many people are having similar designs. Every scratch of a tattoo has a story, but how unique is our ink today?

Paramedical cosmetic tattoo artist, Rachel Kennedy, started tattooing nipples on breast cancer victims to help bring back their confidence, which leads in to question other surprising reasons for people to get inked.

Reasons to get inked up

While it is already known that many people dedicate their tattoos to lost loved ones, there are also surprising reasons too.

Valkyrie’s resident, Justin Oldham says he has seen one of the biggest responses from communities getting bee tattoos in support of the Manchester bombing victims. “I actually went up to Manchester to tattoo at the event, he says, “I tattooed bees for the terror attack and ended up getting one for myself.”

Naomi Hoang, of Naohoa Luxury Bespoke Tattoos was the only tattooist who tattooed bees on people in Cardiff itself. “I had a call from someone living in Cardiff who was from Manchester who made a very passionate plea on the phone to me,” she explains.

Naomi offered the tattoo for a few weeks but says it was one of the biggest reasons to get a tattoo that she has recently seen. “It does seem that trauma is the main to stem for getting tattoos,” she explains.

Even though these thoughts were echoed by Physical Graffiti owner, Chris Jones, he also argues that a lot of it was because of social media and people wanting likes on their page.

Shockingly, lot of tattoo artists are asked to cover up caesarean scars. Justin recalled a specific client, whose scar was so bad the skin had fused onto the muscle. “It was quite interesting to do,” he says.

Even though she has not tattooed any caesarean cover ups herself, Naomi has been asked for a few, but they have always fallen through.

Yet she also makes the remark that she does not find these reasons particularly surprising.

What she does finds interesting is covering up names: “Covering up exes names! That’s always the big thing,” she says, excitedly.

The artists also argue that patriotism is a reason to get a tattoo in Cardiff. “I’ve done a lot of red flags, and leeks on people,” Chris explains, but he always thinks that people get Welsh tattoos because they do not know what else to get.

Justin, who’s studio has just moved to a bigger location feels that it was more fashionable 10 years ago but that he stills get clients wanting a Welsh tattoo whereas Naomi believes daffodils and dragons are aesthetically pleasing anyway.

As the only cosmetic tattooist out of these 4, Rachel Kennedy’s work is extremely surprising as well as moving. She has been tattooing 3D nipples on breast cancer victims for free, in order to help them gain back confidence. “I always cry,” she says, “More often than not they are totally gobsmacked (with the results).”

A part of there being surprising reasons to get tattoos may fall down to ink individuality decreasing. Justin explains that artists have tattoos they describe as ‘Pinterest tattoos’.

“If you go on Pinterest and type in ‘tattoos for girls’, it’s always the same thing,’ he says, ‘You get a lot of people asking for that type of design and you have to explain, ‘Yeah there are 20 people today who have asked for that.’”

Rolling his eyes in dismay, Chris answers that ‘Pinterest tattoos’ are when a client thinks “they are the only person in the world that’s ever thought about it, even when they have seen one million pictures on the internet.”

Naomi offers a more alarming view towards this idea, “It is concerning that the trend is growing on Pinterest, because a lot of it is fake.” A lucky cat and an orchid. Naomi offers a tranquil tattoo experience but is concerned about the increase in desire for ‘Pinterest tattoos’

It is almost as if the mention of a pocket watch gives all 3 artists the shivers. None of them are particularly fond of that tattoo at all.

Origins of tattoos are as mysterious as the people themselves, but you only need to scratch at the surface to discover the stories behind them.

Justin Oldham stands behind an interesting painting at Valkyrie tattoos

Chris has been tattooing for 17 years and is self-taught. He got his first tattoo when he was 19 which is a Chinese symbol saying ‘Evil’.

Naomi was previously an illustrator but soon swapped her drawing pen with a needle. She has been tattooing for 3 years and has one tattoo which covers the majority of her back.