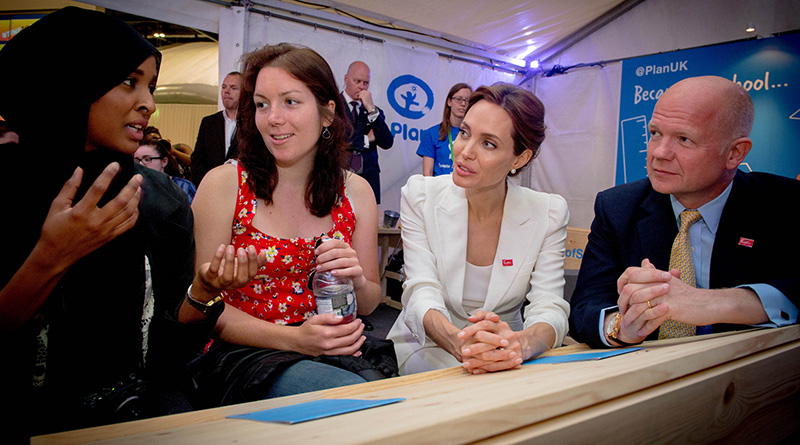 “End Sexual Violence in Conflict” by Foreign and Commonwealth Office is licensed under CC BY 2.0

When the BBC announced last week that its flagship news and current affairs Radio 4 programme Today was to be guest edited by actor and campaigner Angelina Jolie, the news was greeted with a certain amount of sniffiness.

The Daily Mail, whilst acknowledging her humanitarian work, nevertheless saw fit to refer to Jolie as a relatively lightweight celebrity, whilst one or two commenters online referred to her with (metaphorical flourish) as, “not the sharpest tool in the shed” and “not the brightest bulb”.

As I say, to be fair to the Mail, they did draw attention to Jolie’s sterling record of speaking out against violence and rape against women and noted that her role as guest editor would see her speak directly to refugees and survivors of conflict.

But broadly speaking, the reaction was to be expected. Despite all Jolie’s efforts to be position herself as a responsible, active citizen as well as a Hollywood actor, there’s a widespread tendency to dismiss her as a vacuous airhead interested solely in the pursuit of publicity..

When it was announced in 2016 that she was to take up a teaching post at the London School of Economics it was left to Hannah Fearn in the Independent to point out that Jolie’s input – on a Masters degree in women, peace and security – would be based on her roles as a “goodwill ambassador for the UN Refugee Agency, a campaigner on refugee rights, an activist on female genital mutilation and [as someone who] has addressed world conferences on the use of rape as a weapon of warfare.”

The truth is that many people are transparently suspicious of celebrities being involved in any sort of activism and for having political opinions. Take Wales’ Charlotte Church, who this week announced her plans to open her own secondary school by next September.

When Church appeared on Question Time in 2015 she stated that there was evidence to suggest that climate change was a big factor in the genesis of the Syrian conflict.

In the Sun, Kelvin Mackenzie  witheringly questioned Church’s intelligence and wrote that she suggested the Syrian conflict was caused by climate change. Then the paper’s front page carried a feature with the headline ‘Voice of an angel….Brain of Angel Delight’ which referenced her ‘bizarre Syrian conflict theory’ and stated that her, ‘heavenly strains have become the hectoring rant of a political activist striving to reinvent herself as a mouthpiece of the poor — and risking simply sounding like an idiot.’

That the Sun should go after Charlotte Church is entirely to be expected, of course – her statement to the Leveson inquiry into the culture, practices and ethics of the press in November 2011 was highly critical of her treatment at the hands of the News of the World and in 2012 she received £600,000 in settlement damages and cost from News International over phone hacking claims.

But it wasn’t only the Sun – In the Telegraph, Alison Pearson wrote dismissively of ‘La Church’ and of the fact that her colleague Charles Moore, ‘struggled just a teeny bit to keep a straight face during some of the Welsh chanteuse’s interesting views’.

I’m always inclined to dismiss commentators opinions on such matters – puffed as they are with an inflated sense of their own importance, glibly shouting ‘dumbing down’ when anyone not from their protected elite of recognised voices is granted the opportunity to contribute. Mackenzie, Pearson, et al are transparently suspicious of celebrities having political opinions. As if being proficient in one area disqualifies involvement in another.

But what’s really interesting about these commentaries (both online and in the main stream press) is not simply the casual and hackneyed sexism with which they were expressed – it’s also in the probably wilful misinterpretation of what Church actually had to say on Syria and climate change. She explicitly said that climate change apparently contributed to the war. She did not suggest, as Mackenzie wrote, that the Syrian conflict was caused by climate change.

And guess what?  There does appear to be evidence to support her assertions about climate change and conflict. Amongst other reputable scientific sources, Columbia University Climate Scientist Richard Seager suggests a drought that affected Syria between 2006 and 2010 was likely caused by manmade climate change. He said that “We’re not saying the drought caused the war…..We’re saying that added to all the other stressors, it helped kick things over the threshold into open conflict. And a drought of that severity was made much more likely by the ongoing human-driven drying of that region.”

To some in the world of journalism or academia anyone not from the protected elite of recognised voices is denied the opportunity to meaningfully contribute. It could be, in academic John Street’s words, that criticism of celebrity activism has its roots in a fear that it debases “liberal democratic political representation” and marginalises relevant expertise.

It is certainly not a new phenomenon. Street notes that as far back as the 17th century non-political public figures (such as the poets John Dryden, John Milton and Andrew Marvell) were voicing their opinions on the English civil war. And in the 19th century, the most celebrated and noted critic of governmental social policy and advocate for reform in Britain was Charles Dickens.

But of course modern celebrity is an entirely different entity. As Meyer and Gamson highlight, today’s celebrities do not generally come not from the arts or literature but from the mass media of film, television, sport or pop music. The distrust or suspicion of a pop star’s views on, say, global warming may be because the star’s renown is based on public attention and not through institutionalised learning or experience. When you add to the mix the fact that modern performers’ careers are transient and often based on relentless self-promotion and the gaining of wealth, it’s not difficult to see why audiences may question authenticity and motives.

And for Jolie and Church the added issue is their gender. As women of note, they are forever pilloried by a small (but vocal) minority who refuse to believe their talents or aptitude can extend beyond their primary fields of expertise.

Sections of this piece originally appeared in the Conversation