On Wednesday 26th June, Chancellor Osborne delivered the coalition governments’ latest serious attack on the social fabric of this country. Amongst a further £500 million to be taken from education budgets and £2.6 billion from the budgets of local councils, the Treasury’s official Spending Round document outlined major and pernicious changes to the welfare system. For those unfortunate enough to become unemployed – watch out. Let’s quote from the document:

Taking point 3 alone, what this effectively means is that the present three day wait before the unemployed can claim benefits is being extended to seven. As Polly Toynbee wrote in the Guardian, this is an attack on people at their most vulnerable – potentially forcing them into the hands of payday loan merchants.

But Toynbee is something of a lone voice in the press. Where is the outrage, the disgust and the fight back? A number of commentators seem to think the story isn’t the continued cuts at all. The real story – one could be forgiven for thinking – is Osborne’s tweeted picture of himself, the night before the Commons speech, enjoying a burger, chips and diet coke.

I see the hand of Conservative PR in all of this. They knew that the publicity this tweet would garner would hopefully eclipse the fury over another set of crippling cuts. It was a crude piece of calculated propaganda which duly made the front page of The Sun.

It matters not that Osborne is criticised by the Sun for eating a ‘posh burger’. The real point is that the focus of the debate was now on the man and not the policy. Osborne’s reputation as collateral damage, maybe?

Another aspect to consider is that the newspaper-reading, web-surfing public are more inclined to read about the eating habits of the Chancellor than they are about his fiscal policies.  A study by academics at the University of Bristol’s Intelligent Systems Laboratory analysed the choices made by readers of online news and found, according to lead researcher Professor Nello Cristianini, ‘significant inverse correlations between the appeal to users and the amount of attention devoted to public affairs. People are put off by public affairs and attracted by entertainment, crime, and other non-public affairs topics.’

The study also found that news articles were more appealing when the language used was more subjective – readers preferred tabloid articles to those of the BBC, as the Daily Mail gleefully pointed out.

So the real news becomes a side issue. We have the burger picture instead of the bigger picture. That governments seek to draw attention away from unpopular policies should surprise none of us – but the regularity with which we fall for such obvious propaganda should. 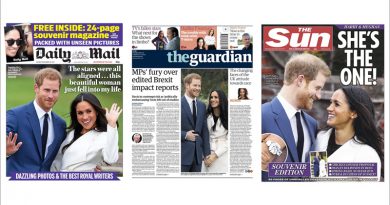