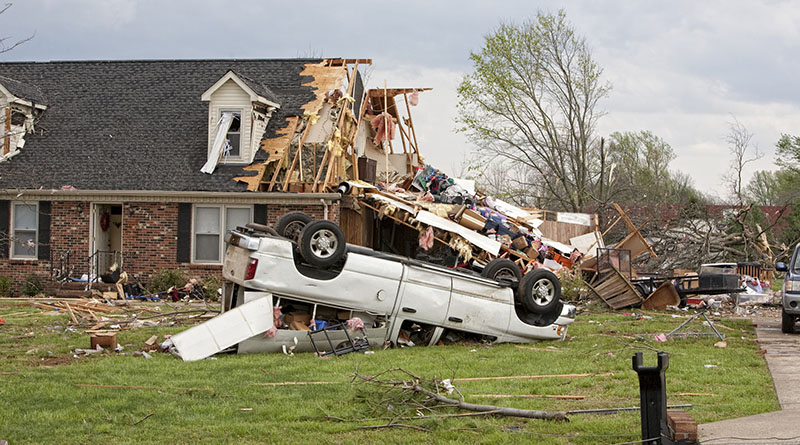 With Hurricane Irma wreaking ‘apocalyptic’ havoc it’s perhaps easy to forget that when Hurricane Harvey struck the US state of Texas in late August, 50 inches of rain fell in a period of little over four days. This, combined with extraordinarily high winds, saw the city of Houston in particular brought to what seemed to be the edge of destruction. It’s been estimated that 44 people were killed whilst 32,000 were forced to seek temporary accommodation.

Reports in the UK broadcast and print media focussed upon Harvey’s devastating impact and the human cost. We saw abandoned homes and upturned vehicles – with each image of desolation given added potency by the voices of the dispossessed, the rescued and the rescuers.

At roughly the same time, flooding in India, Bangladesh and Nepal was taking place with international aid agencies reporting the death of 1,200 people with millions made homeless. On September 1st the death toll in the East Indian state of Bihar alone stood at 514 with disaster management officials reporting 17.1 million people had been affected in over 21 districts of the state.

To some commentators this catastrophe, at least in comparison to the coverage of Hurricane Harvey, did not receive the international attention that it merited. Writing in the New Statesman, Sanjana Varghese  stated the New York Times ran one story on the flooding in South Asia on 29 August compared to five on Harvey. Meanwhile, she wrote, on the Guardian’s world news page on 30th of August there were at least four different stories on Hurricane Harvey, and one on South Asia.

The Guardian’s own Jonathan Freedland admitted the problem: the comparative coverage of the two events amounted to a ‘pretty basic’ form of racism in a fundamental form, he argued. What we had here was the lives of one group of people deemed to be worth less than those of another – worth less coverage, less attention, less sympathy, less sorrow.

Perhaps it was this thinking that prompted singer and broadcaster Cerys Matthews to tweet:

How in the hell does the death of 1200 people in Indian floods warrant just 1 min of news, whilst we get 10 mins on Texas floods? @BBCNews

That’s a fair question. So in respect of understanding the reportage of overseas disasters and foreign news in general, it’s helpful to consider a study into news values produced over 50 years ago which still has relevance.

In 1965 Johan Galtung and Marie Holmboe Ruge hypothesised that how much prominence a news story was given was governed by 12 factors. Among these factors were: meaningfulness, personalisation, reference to elite nations and reference to elite sources.

In terms of Hurricane Harvey we had all of these aspects in play. In terms of meaningfulness, which relates to cultural proximity and the extent to which an audience can relate to a topic, news about a disaster in the US has far more value than an event in Africa or Asia. This is because of the perceived frequency of catastrophe on those continents and because the “subjects” of the Texas flood are considered to be people with similar backgrounds and traditions.

This clearly relates to personalisation. Many of the victims of Harvey were presented from a human interest angle. These were people, like “us” going through the same sets of problems that we would encounter should we have the same misfortune. As American author Susan Moeller once argued:

We tend to care most about those closest to us, most like us. We care about those with whom we identify.

This was obviously also a story about an elite nation and it’s a fact that global powers with an established place at the high table of news coverage will receive more attention than those with less influence. The elite sources aspect is the most self evident in the case of Harvey. The media favours the elite and in Donald Trump (described by journalist Dave Pell as, “the I of the hurricane” the whole event could be viewed through the prism of President’s reaction.

There are other more practical reasons as to why Harvey was considered more newsworthy than what was happening in India. Put simply, news agencies have representatives in the US constantly ready to report on stories as they happen. The technology, personnel and previous reportage is in already in place. When disasters occur in locations where this may not be the case then footage, analysis, reaction etc can be more difficult to obtain.

Connected to this is the gradual disappearance of what was traditionally called the foreign correspondent. Media agencies simply do not have people covering the areas they once did. The reasons for this for this are mainly economic but there is also the belief, as articulated by Oliver Wilmott that newspaper editors believe there simply isn’t the appetite for serious international journalism amongst the newspaper-reading public.

There may be some truth in this. Journalists produce news they believe their audiences will read, watch or listen to and empirical evidence suggests people (generally) don’t want to consume news stories about foreign tragedies.

According to Martin Belam, a journalist who has worked for the BBC, Guardian, Sony and the Daily Mirror, news about terrorism outside of Europe is being covered – but analytics are telling us we are not reading about them in great numbers. He wrote:

Search Google News and you will find pages and pages of reports of the attacks in Beirut. Pages and pages and pages …To say that the media don’t cover terrorism attacks outside of Europe is a lie … But as anyone working in the news will tell you, if you look at your analytics, people don’t read them very much.

This is the key issue – these analytics now drive journalism and the likelihood is if we don’t click on foreign stories the less and less we will see them appear. This is the market, this is the political economy of the mass media. What might this mean for our sense of world events is frightening to contemplate but we as an audience must take some responsibility for the news we receive.

One last point about the reporting of the world’s most recent catastrophes should go to environmentalist, campaigner and author George Monbiot. He posits that the debate around the subject censors the discussion of climate change. We hear of an act of God or natural disaster whilst there is very little mention of human contribution. And this is not simply political or media censorship – it is, he states, the entire body of polite opinion.

I fear that he’s right. On Thursday, when Parliament’s sole Green MP Caroline Lucas linked Hurricane Irma to climate change the government spokesperson on the issue, Alan Duncan, stated in response that she was “deeply misjudging the tone of the House” and went on to demand that Lucas “show a bit more urgent and immediate humanity, rather than making the point that she has made today”.

There was, in the aftermath of his words, audible approval from his colleagues.