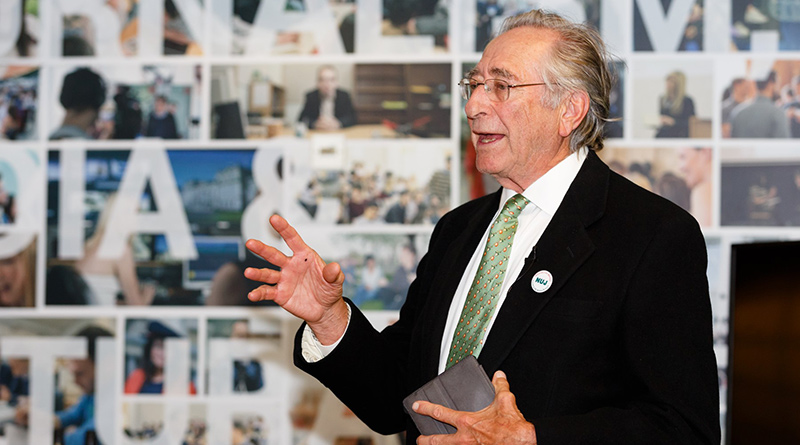 It was in recognition for the way in which he reported from the traumatised community of Aberfan in 1966. He made a powerful statement about the role of journalism in his acceptance speech, which you can read below.

His association with JOMEC goes back to last September when he spoke at our conference on reporting trauma in the context of the 50th anniversary of the Aberfan Disaster of 1966 – which he reported for Life magazine. You can view the video of his powerful presentation at the conference here:

Chuck Rapoport is now 80 years old. This is what he said last night:

“This photo assignment – the one that moved me to come to Wales – was borne on the wings of sensitivity. From the very first television images on that Friday evening in New York, I felt a very strong compassion for people unknown to me – people in the small mining village of Aberfan.

“I know firsthand about the poor treatment of the grieving parents and brothers and sisters, having heard it from the very ones who were suffering so greatly. I didn’t understand it then and I still don’t understand it, nor will I try to. I am not a social scientist. I was and still am a journalist – and as such – commanded by profession to search out truths as best I can. And upon discovery, capture it with camera and lens to record it forever.

“I speak about being a journalist and seeking the truth at a time when in my home country, and in other nations around the world, journalists and press freedoms are coming under attack. Legitimate news sources are being labelled “Fake News” and the real fake news is being touted as the new truths. It is our duty to continue working to get at the truth and to put it in front of the world for all to see.

“I am so pleased that at a time in the United States, when the Congress has turned its collective backs (I’m speaking of the ruling party that wields control of investigations) on looking into serious charges of malfeasance bordering on treason – and it is the press, the Washington Post and the New York Times and online news gatherers, who have sprung open undeniable occurrences of foreign interference and corrupted an election manipulating and elevating a willing stooge to the highest office in the land.

“I am proud to be part of this community of truth seekers, of colleagues with pens and cameras, who put not only their reputations on the line – but many times – their lives as well. I will cherish this membership in the NUJ.