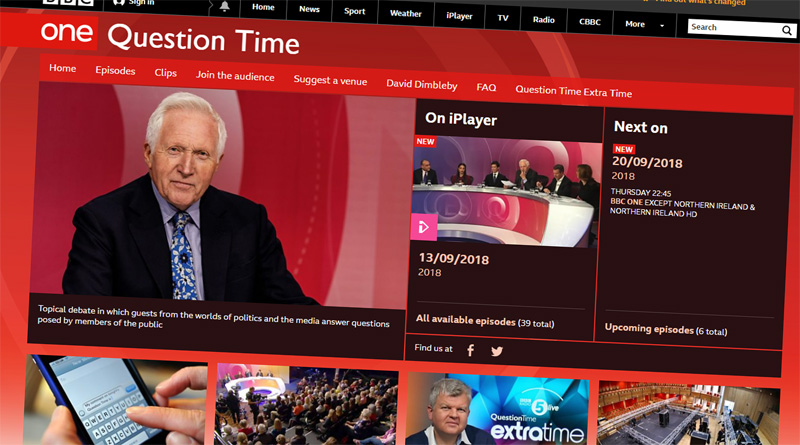 The BBC’s long-running political panel show, Question Time, which returned to our screens on Thursday, sets out to be topical, relevant to its audience and spiced with a dash of controversy. In that sense, this week’s guests – comprising Rory Stewart, Conservative MP and Minister of State for Courts and Justice, Labour member Chris Leslie, business guru Theo Paphitis, Dr Faiza Shaheen, director of CLASS (Centre for Labour and Social Studies) and broadcaster Julia Hartley-Brewer – seemed rather lacking. Not a high ranking politician or front line political commentator in sight. Nor, to be fair, a George Galloway, David Starkey or Russell Brand.

It was at times a rumbustious affair – how could it not be, you might say, as the government scrambles from one Brexit crisis to another – but the absence of a truly controversial figure is maybe a good thing because controversy has been something of a modus operandi for QT in recent years.

It is Starkey, actually, whose appearances have historically garnered the most publicity. When he and Galloway appeared together in February 2014, it was the historian who hit the headlines when he volunteered the view that rape was about violence and not consent.

In 2012, Starkey brusquely told an audience member that if he couldn’t recognise propaganda from fact he “shouldn’t be at a programme like this”. And, in the wake of the Charlie Hebdo massacre, he accused Islam of being “backward” and referred to Mehdi Hassan, then political director of the Huffington Post, as Ahmed.

In fact, there was a point early on in this edition when Starkey’s individual approach to debate and the reactions to him, threatened to reduce the proceedings to farce. Each guest appeared to shout over each other while the increasingly visibly tired David Dimbleby struggled to maintain control.

It occurred to me then that all this resembled nothing more than a diluted imitation of Prime Minister’s Question Time, which is, as a matter of tradition, a weekly reminder of how base and degraded British democracy can be. Speaker John Bercow’s estimation of PMQ’s as a “litany of attacks, sound bites and planted questions” seemed a pathetically apposite description of what I was watching.

There have been many who have called for an end to the programme which was first broadcast in 1979 and originally chaired by Robin Day. Lloyd Evans, in the Spectator in 2013, wrote that it was no longer the honest debating chamber that it once was, but rather an “unseemly gold-rush for applause” where “the panellists were a set of needy egos” and the audience, “composed of wonks and party activists posing as disinterested voters”.

Science writer Martin Robbins put it beautifully in an article in The Guardian which was helpfully accompanied by a graph illustrating that stars from The Apprentice and Dragons’ Den have made more appearances on Question Time than “all the scientists in the world put together”. Robbins wrote that Question Time was failure when it came to providing informed debate.

The bulk of panelists are drawn from the same upper-middle-class, upper-middle-aged pot of journalists, lawyers and politicians, and are often profoundly ignorant on topics outside of that narrow culture. Science, sex, the internet … attempts to tackle anything outside their world result in bewildering exchanges that confuse more often than they inform.

But Question Time has currency because it is the most watched political programme on British television and, as Phil Burton Cartledge points out, an appearance on the show by a politician or a commentator is a signal that they should be taken seriously.

But how long will that continue to be the case? The problem is that the programme should be about debate and information but it descends all too often into travesty. This is due largely to the ambition of a few notorious guests who are routinely asked to appear. Being controversial, difficult or rude seems to guarantee a return ticket. This, obviously, means serious discussion is not necessarily the main objective.

It should be acknowledged that for all the criticism, it appears that, historically, the audience has pretty much preferred the verbal jousting a “Starkey versus Galloway” bout is guaranteed to provide.

The much-trumpeted appearance of Nigel Farage and Russell Brand on the same show in December 2014 led to a huge increase in viewing figures. That show reportedly had an extra million viewers more than the previous week. It rated as that particular Thursday’s second-highest watched show with 3.4m people sitting down to watch.

The continued appearances of Farage (31 over the last decade) is something which has irritated commentators with Nesrine Malik arguing that the election of Trump has added renewed value to his persona. What Malik is hoping for is honesty from the producers. She writes:

“I am hoping that, one day, someone will give up the pretence, simply sigh and admit: “He’s just really good value.”

What is certainly true (to an extent) is that both Brand and Farage have altered the political landscape and that their populist approach has proved to be immensely attractive. That is why they have appeared on the programme. The question is whether this is to be celebrated in an age where the newspaper-reading, web-surfing public are more inclined to be more interested in who is sleeping with whom?

A study by academics at the University of Bristol’s Intelligent Systems Laboratory analysed the choices made by readers of online news and found, according to lead researcher Professor Nello Cristianini:

Significant inverse correlations between the appeal to users and the amount of attention devoted to public affairs. People are put off by public affairs and attracted by entertainment, crime, and other non-public affairs topics.

Maybe Question Time, despite its more than occasional forays into farce and drama, still has validity as a medium which draws in viewers who would normally eschew political programming?

Whatever your view, Question Time in 2018 is far removed from its staid three-party roots of 1979. But then so is the UK. The producers of the programme have tried to embrace modernity with the acknowledgement of celebrity culture and the adoption of social media – viewers can now text or tweet while watching, using the red button on the remote to access a selection of comments which run along the bottom of the screen.

The producers of the show are not blind to the criticism it receives, either. Thursday’s programme was preceded by a tweet from the BBC News Press Team which included a chart showing a breakdown of panellists since 2000. But the fact is the chart only provides selective information and, in the words of analyst Dr Stephen Cushion raises more questions than answers. Damian Collins , Chair of Culture, Media and Sport Select Committee was also moved to point out that :

“This highlights the problem with BBC Question Time. The most represented panellist group comes not from those elected to serve & take responsibility for decisions but commentators who can play to the crowd without having to answer for their action.”

But let’s not forget also that it is one of the very few programmes which allows politicians to be directly addressed by the electorate. It has its faults quite obviously and the observations of Martin Robbins are persuasive, but for all that I say we should be glad it still exists.

This article appeared in an earlier form here