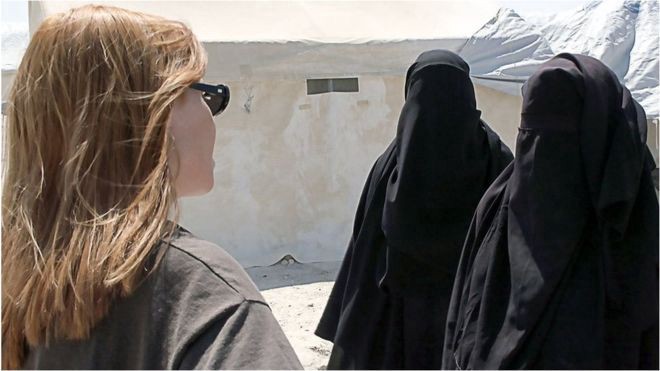 Stacey Dooley. I don’t know her, but I’d hazard a guess she’s not having a good week. And it’s not entirely HER doing. Hear me out.

Marcus Ryder — ever the erudite social analyst has written a piquant and incisive piece about the affair and the aftermath here, which also morphed into a BBC PR blunder itself.

Dooley’s making a piece for BBC flagship investigative programme Panorama about women from countries like the UK or US who are believed to be part of the Islamist group ISIS. The programme’s called “Stacey Meets the IS Brides”.

The bold title, to some, carries with it more than a whiff of hubris. What’s more important here, the issue or the lens? Credibility from years and the occasional award within the genre e.g. Louis Theroux meets…” smooths acceptance. But yes I can see it’s used to appeal to her fanbase.

A trailer goes out on the evening news. Viewers spot something Dooley has said which is incorrect. The women raise a finger, which she reports as an Isis salute. Dr Myriam Francois disagrees.

Then the follow on damage limitation as it unfolds begins to take on the shape of defensiveness without acknowledging viewer’s concerns. Again Ryder, a former BBC executive now Chief Global Editor for CGTN provides this response, a 101 lesson in PR. I’d advise anyone in the corporation to dust off their copy of Smith and Elliott’s Key Readings in Crisis Management: systems and structures for prevention and recovery.

Dooley has seemingly slipped under a vehicle (you might go further) and she could have been helped out much better. The BBC’s response fires up further criticism.

The initial response appears to have been swift. The Guardian’s Joseph Harker raised a tweet from Dr Francois. I can’t be sure this is what prompted BBC Editorial Director Kamal Ahmed to tweet about the affair and that it had been corrected. But what followed afterwards, well? The fall out will clearly have annoyed BBC bosses in overshadowing the work gone into the item.

Inthe early 90s I worked on a BBC programme called Reportage. It was full of young people like Dooley looking for their break. Unlike many areas within the BBC, the staff were a varied and a diverse bunch. A Liverpool lass by the name of Esther McVey sat behind me. Hardeep Singh Kohli was one of my producers. Many graduated to flagship progs like Here and Now, BBC News and Panorama.

Dooley epitomises the BBC’s optics that anyone can rise from shop assistant (we’ve all started somewhere) to become a trusted personality and journalist. It draws reference here to “‘the Strictly Come Dancing’ winner visited camps in northern Syria…”

Reportage, as a weekly team production, isn’t a million miles from current affairs news output workflows and neither is Newsnight another prog I worked on; though they output every day.

As a reporter you work with a producer, who continually talks to an overall programme producer for the week, and then there’s the series producer, and overall editor/ executive producer. Then there’s the network of people around you. On Reportage, once we came close on an item revealing the identity of a young offender which would have breached programming codes. I wasn’t doing the cutting, but if it hadn’t been caught it would have been my bad.

Dooley, I’d wager in the workflow has a similar network and for a programme featuring complex or sensitive material like Isis there should have been added vigilance. And so you ask, at the point she or someone says the gesture by the women was an Isis sign, she would have called for a fair number of people to watch and seek their advice. No? Was the gesture caught in the field, when she was probably with a fixer/translator, or in the edit room? Did the team of seniors who OK output have watched and approved the trailer?

At this point, when I was on Reportage or working at BBC Newsnight I would have called on an expert, someone in the contacts book or from within the corporation to have a look. Did this happen with Dooley? And if not, is this not a failure within the system? The flak stops with the editor. The tone, style, implicit message, is Panorama and principally steered by its main custodian the editor.

Thus far Dooley hasn’t been on twitter to say what went wrong. There might be many reasons, but I know enough of corporate crisis that when things go south and the brass watching go into management mode, the usual advice is to lie low, say nothing and let the crisis team handle this. It’ll blow over, would be the mantra. I disagree. Fess up, be genuinely contrite, and ask that we move on. But the editor, well, perhaps we’re hear more on BBC Radio Four’s Feedback?

The need for diversity in storytelling is paramount. Why? Just Why? Because the way we see the world is shaped by several factors: your upbringing, where you’re from, your schooling, your prejudices, the company you keep. A team of diverse professionals helps you see blindspots, bring fresh context, and sidestep howlers. It’s so easy to get caught up in what I call the “snow fall or “Harmattan ” effect.

That’s when you experience snow or a Hamattan coming at you and naturally become excitable. Of course you should, but local friends would do well to provide what du Bois calls a double consciousness — in effect be aware of how others think. In this short piece I made on the workflow of Masters students completing long form, you hear at 2.18 the student explaining the script and me scrutinising this.

I have been a champion diversity for a long while. It goes far beyond the reporter. It should also address experts in all areas who understand the nuances and subtleties of culture, but also the langue of how, as @jeffjarvis puts it reporters could be more academic in their writing. By that, reading the responses, about the finger salute, Tawhid, its meaning required the elastic suppleness of writing, context and supposition of its use. That’s a bigger (shouldn’t be) issue for the BBC to address in one tweet.

Reporting from South Africa in 1992, I became a de facto point person for reporters coming over who didn’t have a bureau. I remember once a national reporter I was with seeing some folks toyi-toyi with clubs in Soweto become nervous. He sought to describe it as menacing. I told him otherwise.

The perception, whether erroneous or otherwise is that, as Dooley acts out every wannabe reporters’ dream to rise to super levels, is she being ill-advised or woefully mentored? Are the “grandmothers” and “grandfathers” aware of the effect they’re having on their rising star? Social Media too can be so unforgiven. Or might it just be, forget about everyone else, I’ll take care of you. Which is what an actual senior editor told a colleague of mine when we joined the station.

As the front person of a programme, it brings with it many highs when the show goes well, but you can also be vulnerable, particularly in cases where the show attracts criticism. Viewers may care little about the credits.

I’m a lecturer now, which doesn’t mean I’m flaw-free, but I see in young aspirants that needed sense of purpose to make it to the top. Yet also, this drive can be either be misinterpreted or require a nudge to avoid undue attention. The optics, perception, is a large part of what the visual medium sells. I don’t doubt Panorama doesn’t know that for a second. But it’s seconds of tv that can overshadow 30 minutes, if not careful.

Dr David Dunkley Gyimah has been a journalist for thirty years and is one of the leading writers in Journalism on @medium. He’s a senior lecturer at Cardiff University Jomec More on him here.