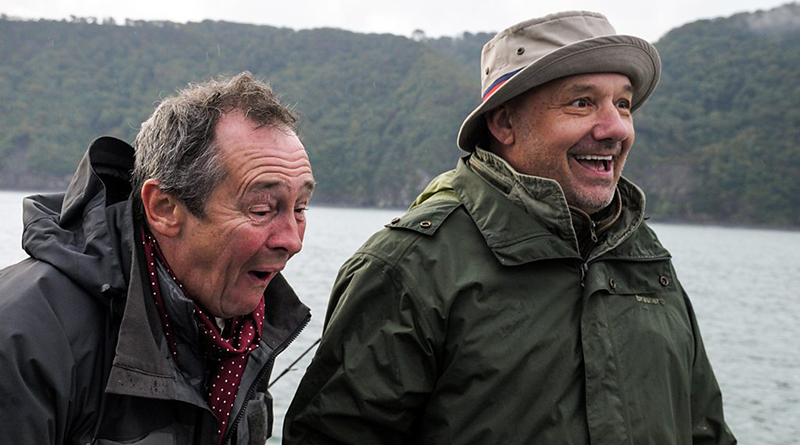 The BBC is currently broadcasting the second series of “Mortimer and Whitehouse: Gone Fishing.”

Series one was a resounding success. Critics praised its “naturalness”  and called it “warm and funny human and healthy” whilst audience reaction was unanimously positive. Despite being scheduled late at night during the football World Cup, over 1.8 million viewers saw the first ever episode and RadioTimes.com readers voted it their 2018 “TV Champion”.

The premise of the show is terrifically simple. In a sort of televisual travelogue, comedians and long-time friends Bob Mortimer and Paul Whitehouse (as themselves, it’s not fiction) travel the rivers (and sometimes the coasts) of the UK, fishing, chatting, eating and drinking. The action, in so far as there is any, is decidedly low key – it’s the relationship between the two protagonists which charms above all else. We are made aware early on that the two men have undergone life changing heart surgery and that Paul is the consummate fisherman, Bob is the willing, if mischievous, pupil.

It’s perhaps not so surprising that audiences are drawn to this gentle, good hearted affair. It’s understated pace and intimacy is many ways the antidote to the 24/7 hyper speed culture we live in. Perhaps viewers are attracted to, and can identify with, the simple displays of uncomplicated friendship and repartee on display. It’s certainly true that in times of austerity or national crises we are drawn to the recognisable and tangible.

Mortimer and Whitehouse are, I would guess, how many middle aged men would see themselves – their seemingly effortless witty banter and comfortability something we’re invited to believe any two mates could replicate if given the opportunity to escape the rat race.

But that’s the illusion – in the end these two are consummate performers and the direction, editing and choice of accompanying music is quite superb. So, the show is also expertly constructed. Come for the jokes, stay for the scenery. Episode 1 of series two was set on the river Usk and showcased the breath-taking beauty of natural Wales.

One minute we’re laughing at Bob’s criticisms of Paul’s family photos, the next we’re moved by his recollections of his mother and Paul’s scattering of his father’s ashes in the Usk as a choir sings Mae hen wlad fy nhadua. This was done in such a way to accentuate the personal nature of Paul’s gesture without dwelling on how emotional it might have been for him. You very quickly begin to understand that Gone Fishing is really about men coming to terms with growing older.

Mortimer and Whitehouse: Gone Fishing has inevitably been compared to the Steve Coogan and Rob Brydon vehicle, The Trip and while there are obvious structural similarities (food and different locations are a major part of each show) the Trip, brilliant as it is, is far more about showcasing the comedic talents of the “fictional” Brydon and Coogan.

I understand that the programme will not be to everyone’s taste – the idea of two white middle aged men, with hardly a woman in sight, just fishing and chatting will strike many as reactionary tripe – but that’s OK, isn’t it? We can like different things and still get along.