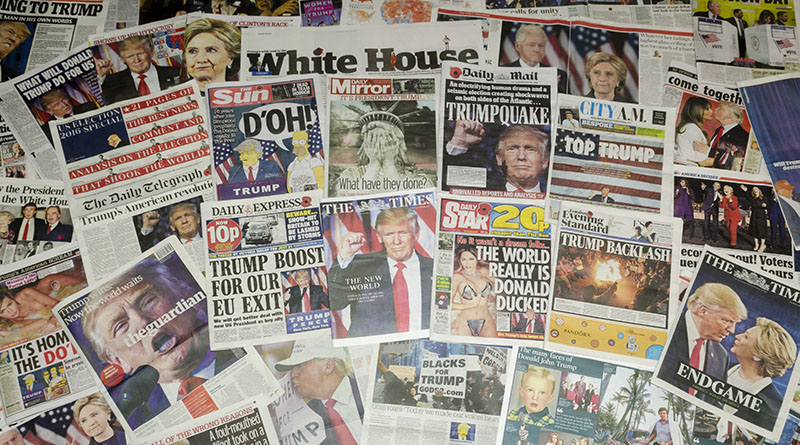 In a turbulent era of fake news, Donald Trump, and Brexit, the need for accurate reporting and informed comment and analysis is all too clear. And it has traditionally been newspapers that have done the heavy lifting that ensures the public is kept in the picture. But just when we need them the most, the future of newspapers is unclear at best.

This year is set to be a decisive year for printed newspapers in Britain. In the past 12 months, The Independent gave up print and went online while returns from print advertising continued to decline precipitously leading to profit warnings and strategic reviews across the industry.

Newspapers are caught in a technology-primed trap where social media interlopers are taking readers and profits, changing consumer behaviour and diverting advertising. As Last Words? How Can Journalism Survive The Decline Of Print?, a new book by a group of academics and journalists and published by Abramis sets out, the problems are many and increasing. The book is longer on diagnosis than prescription, but the first-hand experience of those in or close to the media trenches is compelling.

As former editor of the Guardian, Peter Preston, points out, the irony is that reach and readership for newspapers have never been higher, but the difficulty in making a profit has never been greater.

The Independent’s bold move last year has returned it to profitability now it is rid of the costs of print plants and paper distribution. Other papers must be contemplating a similar move. As Adam Smith of the advertising group WPP says in the new book, this poses a dilemma: whether to sacrifice the bird in the hand (print profits from the analogue world) for two in the bush – digital profits which promise much but have shown disappointing pickings so far.

In many ways the UK newspaper industry is a Petri dish of experimentation trying to resolve these dilemmas.

The Times and other Murdoch-owned papers have opted for a full pay-wall, trading higher readership for deeper engagement which can be sold to advertisers. It is in many ways a stand against perceived piracy by the technology companies in favour of paying for original journalism. But as lay-offs at the Wall Street Journal suggest, this trade-off may not be a guarantee of profitability.

Others such as The Telegraph opted for the “metered paywall” – allowing some free articles to ensure the brand is visible online but demanding payment for further use. They have now switched tack to a premium subscription service – holding back some content for subscribers only.

The Guardian has championed the open model – pinning faith on global reach eventually being monetised without subscription. But its finances are creaking – the Guardian Media Group made a £69m loss last year and the nest egg it sits on is disappearing faster than planned. The group’s voluntary membership scheme is not delivering sufficient returns – a switch of direction seems inevitable in the near future.

Then there’s the free model, led by London’s Evening Standard, which successfully gives the paper away to achieve high circulation which can then be sold to advertisers at a higher yield. But what works in one of the world’s most vibrant capital cities, won’t work everywhere.

Other papers have stepped up their partisanship in the hope that sensationalism and impact will consolidate their core readership. As the BBC’s media editor, Amol Rajan, recently commented, in many ways the British press is industrialised confirmation bias. They ensure their journalism confirms their readers’ political bias. “Echo chambers” aren’t new or confined to social media – they have been the business model for the tabloid press for decades. However, circulation for even the most rabid tabloids continues to fall.

Some – like the FT or targeted magazines – are able to serve a niche audience with distinctive, differentiated content. The lesson is if you serve your readers well enough with something original they can’t get elsewhere, they will pay for it. The FT’s recipe of quality content for a group of loyal readers who can attract premium advertisers again works for them – by virtue of their specialist brief. Similarly, The Economist’s deputy editor Tom Standage foresees in the book the possibility of a super-premium US$500 subscription for his magazine by 2050.

Perhaps there is a lesson here for the local press, where the hollowing out of newsrooms and newspapers is gaining momentum. As shareholders demand the returns are kept up, the only answer is to cut editorial overheads.

As a consequence distinctive local content is disappearing, circulation dropping and some entering free-fall. Those that have adopted a “digital-first” strategy have too often ended up with a “trawl social media for free content” policy which has undermined the print product. As veteran media commentator Ray Snoddy points out in the book, the number of stories in some of Britain’s local newspapers has fallen by 85% and revenues by 82% from their peak in past years.

Set against this, Sir Ray Tindle, the founder of Tindle Newspapers, which owns 220 titles in the south of England, says he’s still successful by concentrating on the most local of titles with very local news. If there’s a lesson here it’s that journalism is not a commodity overhead – its the core purpose of a newspaper, cut at your peril. And the pop-up newspaper success of the year, The New European, launched to serve the disenfranchised 48% referendum Remain voters, perhaps offers another example. Highly targeted journalism, low cost operations can work. As its editor Matt Kelly recently told me, The New European would have disappeared as an online-only site. It needed the physical presence on news stands to be noticed, picked up and talked about.

Across the Atlantic more traditional remedies are working. Tech billionaire Jeff Bezos has transformed The Washington Post since purchasing it with major investment in staff and digital operations, building on an iconic print title. Unfortunately, there aren’t many new newspaper magnates like Bezos in the world.

But it points to a formula picked up in the book by Will Lewis, chief executive of Dow Jones: invest in innovation, harness technology rather than be led by it, get ever closer to customers, diversify revenue streams, attract the best talent you can and – crucially – reinforce journalism’s civic role: holding the powerful to account through the power of great storytelling.

His last point cuts to the heart. If newspapers forget their civic role, why should we care if they survive or not? The social media giants have shown, when it comes to the past year’s fake news and other controversies, that they neither understand nor care about journalism’s wider social responsibilities. Too many titles have followed suit offering “clickbait” content in the hope that online clicks will deliver profits regardless of quality. The clear, if obvious, conclusion that emerges from this excellent anthology is that what works is making readers value your journalism sufficiently to pay.

The growing concerns about fake news may yet see some newspapers revive. Brand still matters and there have been some signs of increased circulation following the political upheavals of the last year.

For some newspapers it may be too late – the best, however, will survive. 2017 may be a year where the two camps become clear.