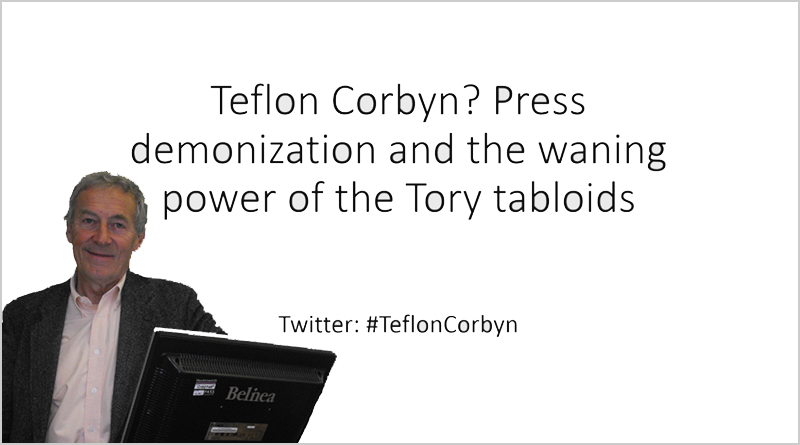 Jones, who worked as a reporter on fifteen general elections, and has written numerous books about journalism and political spin, argued that Conservative-supporting newspapers finally over-reached themselves in spreading scare stories about the Labour Party leader during the lead-up to the 2017 general election.

Illustrated with images from his extensive archive, his lecture argued that even though the denigration of the Labour leader made little impact on young voters, the constant anti-Corbyn press coverage lulled Theresa May and her party hierarchy into a false sense of security, heightening their confidence that the Conservatives would coast to victory. Many columnists and commentators, under unprecedented pressure from news owners and senior editors, pumped out ever-more extreme anti-Corbyn propaganda.

For several previous elections, there has been talk of social media playing a decisive role, ending press dominance. Jones contended that the break-through came in the 2017 election, where the success of digital campaigning and emergent pro-Labour online news outlets, was sudden and stunning. A surge in young voters promising to turn out on polling day pushed the Tories and their tabloid allies to fresh extremes in attacking Corbyn, but had the effect of exposing the limitations, and growing impotence, of their biased coverage.

While he was the unexpected beneficiary of changing media trends, Corbyn remains a target, and judging by the anti-EU hysteria being generated by the Brexit-supporting press, there is little to suggest the tabloids are ready to acknowledge that their scare tactics are becoming less effective. Jones argued that their (perhaps ultimate) test will be the final Brexit outcome. EU-bashing is already being ramped up, perhaps in anticipation of a Brexit breakdown when blame for the chaos that would ensue could be placed firmly on “Brussels bureaucrats” and their “Remainiac” apologists.

But if there was another unexpected election, Jones suggested, and the UK’s future in the EU dominated the campaign, his hunch was that, yet again, we might see the Tory tabloid tigers over-reaching themselves. Newspaper sales are falling, as rapidly as their readers are ageing, and the more bellicose they become, the more they risk underlining their rapidly declining reach and influence. Is the final curtain coming down on the days when the tabloids could command the news agenda, and influence – or even swing – a general election result? Time, and events, will tell.