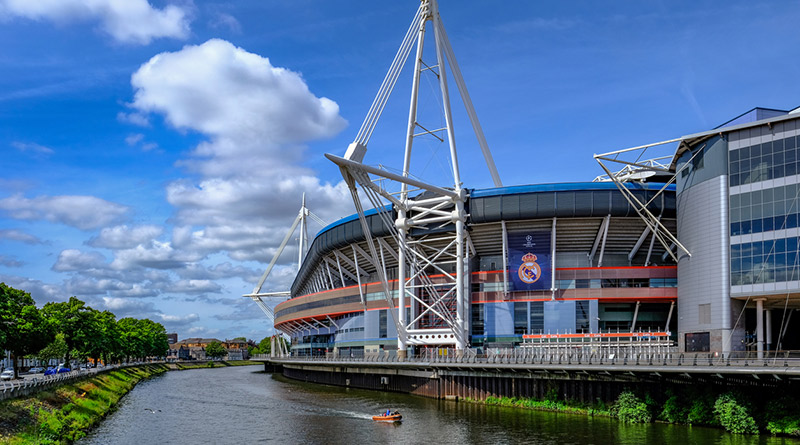 Although Cardiff is no stranger to hosting international events, the staging of the UEFA Champions league final on June 3rd represents the city’s biggest single sporting undertaking.

Transformations in and around the city centre have been going on for weeks – security barriers have been erected, fan zones created and safety precautions put in place on main roads. Amidst a huge police operation which will see the deployment of armed officers, facial recognition software will also be used at the Principality stadium and central railway station

In the light of the recent horrific events in Manchester, safety is an even greater priority as up to 170,000 fans and the world’s media descend on Wales. Not since the NATO summit of 2014 when a 20km fence ran down the M4 from Newport to Cardiff have preparations for an event been so considered and intense.

All of which may indicate how much this event means not just to Cardiff but to Wales as a whole. According to CNN the Champions League final is the main global sporting event producing viewing figures which dwarf those achieved by the Superbowl. With an average audience of 111.5 million the Superbowl is a US institution which attracts the highest viewing figures year in year out almost as a matter of tradition. But compare these figures with 2013, the last time the Champions league final was held in the UK, and you can begin to grasp the sheer scale of Saturday’s event. That year, when Bayern Munich beat fellow German side Borussia Dortmund at Wembley, the game was broadcast in over 200 countries to an estimated global average audience of 150m, with a projected global unique reach of over 360m.

As Chris Kelsey pointed out, such exposure and the influx of fans means a huge financial bonus for Cardiff with direct spending in the city and its vicinity expected to reach around £45m in the period between the 1st and 4th of June.

The added value as a result of such exposure is more difficult to quantify but it’s clear that the opportunity to market Cardiff as a centre of European business, culture and creativity was one of the main reasons behind the bid to host in the first place.

Indeed, such ‘place marketing’, where localities strive to make themselves attractive to international business interests in a bid to engender indigenous development, is clearly what’s going on here. And, as academic David Rowe asserts, sports stars and brands (and Real Madrid and Juventus are both brands with global appeal) will attract people to wherever they go. In Rowe’s words, investing in staging sport is ultimately a matter of turning the entire host environment into a stage. Take a look at Cardiff Castle and the surrounding streets in the days before the match and you’ll see that’s exactly what’s happened.

But it should surprise nobody that top level professional sport is about business and the level of corporate involvement can be gauged simply by looking at ticket allocation for the match. 24,500 of the 66,000 available tickets go to local organising committees, UEFA and national associations and commercial partners and broadcasters.  The rest of the 66,000 goes to other associated corporate hospitality programmes. The clubs themselves each received just 18,000 tickets to be distributed as they saw fit.

Corporate sponsorship, whether we like it or not, is one reason why football is awash with cash. FIFA, the world governing body, has a three tier commercial hierarchy of sponsors and associates. On the top level are the six ‘official’ partners comprising: Adidas, Coca Cola, Hyundai, Emirates, Sony and Visa. According to IEG Sponsorship Consultancy these companies pay an annual fee to FIFA of between $24 and $44 million dollars for global rights to a full range of football activities in World Cup year or not. On the second level are 8 World Cup ‘sponsors’ , such as BP, Budweiser and McDonald’s who pay between $10 and $25 million annually  for, ‘rights to the event on a global basis, including category exclusivity, select marketing assets and secondary media exposure.’ Lastly, FIFA has a relationship with 6 ‘national supporters’ paying between $4.5 million and $7.5 million a year for the privilege of promotion and association with the tournament.

Among UEFA’s partners (along with Sony, Nissan, Pepsi and MasterCard) is Heineken. They have a 23 year old relationship with the Champions League which will continue until 2021. Though neither party has disclosed the exact sums paid for such a privilege, in 2013 sports research company IMR posited that it costs Heineken nearly £44million per year with new deals worth more as they are renegotiated and extended.

Of course, these companies don’t pay these sorts of sums for the hell of it: events such as the upcoming final are massive revenue generators. Brands like Heineken and Sony hope to benefit from the global exposure with an increase in sales in the short term (while the match is being promoted and then played) and by continuing to build upon the association that they have cultivated with the tournament over a sustained period of time. As I’ve written before, the theory is that the sporting environment, live or otherwise, delivers the consumer to the advertiser in precisely the right state of mind to be receptive to persuasive messages and constant presence. The ultimate quest is that the affinity between an individual and an event can rub off on the sponsor.

Brands the size of Pepsi seek to place themselves at the centre of human experience. Implicit through all its advertising (in common with all brands, you could argue) is the fact that the addition of a Pepsi can make any situation better, make any situation complete.

Cardiff is seeking to promote itself in much the same way. If the staging of the Champions League final passes without a hitch, then Wales’ capital city’s international reputation as a cultural and business centre is enhanced beyond measure.

And I haven’t even mentioned Gareth Bale.