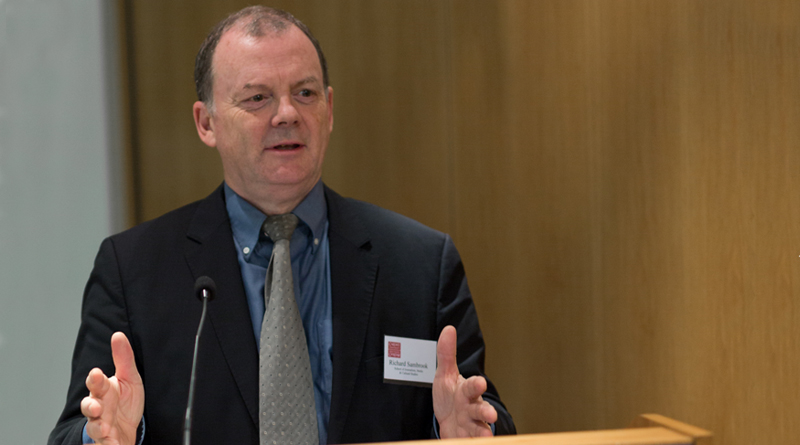 This is the text of remarks made by Professor Richard Sambrook to a Cardiff University alumni event in London on November 23rd discussing the proposition: “What is Truth?” Is undisclosed bias in the media contributing to global insecurity?

There is a journalistic adage which says “Any headline that ends in a question can be answered by the word No”. That applies to at least the second part of this evening’s topic – the first part, What is Truth, may take a little longer than ten minutes to solve!

We are lucky in Britain to have had a mixed environment in media – a broadcasting system regulated for impartiality, alongside a pusillanimous and often mischievous free press. By and large, the public have enjoyed this mix and it has served the UK well – as the home of some of the world’s strongest and most innovative journalism.

Many of course have doubts or concerns about aspects of it and of course the media sometimes behaves badly or falls flat on its face. But the broadcasters – regulated by Ofcom – have clear accountability and complaints processes.

And if the same can’t be said of the press (and I don’t have time here to discuss the unsatisfactory state of press regulation 5 years after Leveson) – their agenda can hardly be said to be hidden: it’s on the front pages every day.

As a small island, we are bountifully served with a wide range of TV, radio, online and press sources of information and opinion from which we are free to take our pick.

The situation elsewhere in the world is not as straightforward. The lifting of the Fairness Doctrine in the US in the 1980s led directly to the growth of highly partisan talk radio and then TV which studies show has exacerbated political polarisation.

Plans to abandon net neutrality in the US would favour the biggest and richest. But in the US, as long as you have money, you can be heard.

Other societies have different problems – hate speech in Africa has led to election violence in countries like Kenya; In Myanmar, “fake news” goes beyond election campaigns and can lead to people being arrested, jailed, and even killed.

Free expression is under pressure in Poland, Hungary Turkey, Mexico, Venezuela, the Phillippines and many other parts of eastern Europe, Asia and south America.

Earlier this month we had the UN’s “end impunity” day for journalism – marking the 101 journalists murdered last year – 93 % local journalists and in 9 out of 10 cases their killers are never found.

I would suggest that the media is as much a victim of global insecurity as a cause.

Information is the currency of our world. Business, politics, social discourse, international relations and more rest on the assumption of shared, accurate information. But we learned in the last year how that currency is being debased in an alarming number of ways.

What has been labelled “fake news” covers a wide spectrum of problems with news and information. These problems are driven by structural issues which the developed world has yet to address.

They include digital accountability of algorithms and the dominant market power of the big technology companies that devise them; the failed business model for serious news and information; deep public confusion about the differences between facts and opinion – often created deliberately by political interests at home or from abroad – and the consequent dominance of assertion over evidence in public debate.

All of which has created a vacuum of trust which is undermining many of the institutions upon which open, democratic societies rest.

My former colleague in Cardiff, Claire Wardle of First Draft News, has undertaken leading research on these issues. Her latest report with researcher Hossein Darakshan breaks down fake news (a title she rejects) like this:

Mis- Information – what is accidentally misleading

Dis- Information – what is deliberately misleading

Mal-Information – what seeks to do deliberate harm

I recommend the full report for the Council of Europe published this month to really understand the nuances of how information can be misused.

If we are to have confidence in what we learn about the world and how it works, these structural issues need serious attention.

In 2013, the World Economic Forum published a report on what it called “Digital Wildfires”:

“The global risk of massive digital misinformation sits at the centre of a constellation of technological and geopolitical risks ranging from terrorism to cyber-attacks and the failure of global governance.”

Five years on that seems a prescient observation.

In the new age of populism, the media is one of the first institutions to suffer.

Polarised politics says either you are with us or you are against us – seeking to deny any legitimate middle ground – the space much traditional journalism seeks to occupy.

All of this is exacerbated by social media platforms and the unintended consequences of technology – for those watching the recent congressional hearings with Google, Twitter and Facebook facing uncomfortable questions, its clear that dark ads, bots and algorithmic targeting have produced a hidden dimension to media communications on a scale we are only just beginning to grasp.

I don’t blame the tech companies – it wasn’t their intention – though I would suggest they have been guilty of both hubris and naivety in their chase for revenue.

These problems stem from a general decline in the terms of political debate and erosion in public confidence in our institutions – including the media.

The latest Edelman Trust Barometer shows trust in the Media at an all time low in many parts of the world.

If the traditional pillars of public communication are cracking, the new ones are proving unreliable, and parties – for commercial or political gain – are seeking to deliberately spread confusion, what is to be done?

We should be in no doubt that without trusted sources of reliable information, and without the media pursuing public accountability, the democratic structures of western societies will fail.

The solution has to lie in our own hands. At every level from government, through business, to education and at a personal level people have to think more critically about the information they consume and share.

So what is the role of a university journalism school in this environment?

40 years ago, The founder of The Cardiff Centre for Journalism, Tom Hopkinson, who was one of the great editors of the last century, said this:

‘I am convinced that the solution to our own communication problems depends above all on close cooperation between the academic and journalistic worlds, each having certain skills and knowledge which require to be brought together in a fusion of talents and blending of methods. On the one hand we both need scientifically-directed research; on the other we both need the capacity to express the results of such research simply and readably, and to relate them to immediate targets or intentions.”

(By which he meant supporting the media industry)

That intent seems more relevant than ever. The study of media is often – wrongly –derided. We are saturated with media and messages every day – many, as we are beginning to understand, fake or malign. There is a serious consequence on public understanding and debate. Media or news literacy is a long term but pressing issue.

The means by which we learn about the world is ever more complicated and beyond the grasp of most of the public who are not algorithm experts.

The need to train generations of “information professionals” able to understand communication, ethically robust, computationally numerate and literate is greater than ever. And that work benefits from a combination of rigorous, world class research coupled with deep experience of practise.

The combination is crucial if we are to unpick “What is Truth?” in this “post-truth” environment, and to understand the role of media in an unstable world .

That’s what we aim to offer at Cardiff as the School develops into new premises, expands in scope and steps up from a national to a global centre of excellence.

The Future of Journalism – final call for papers