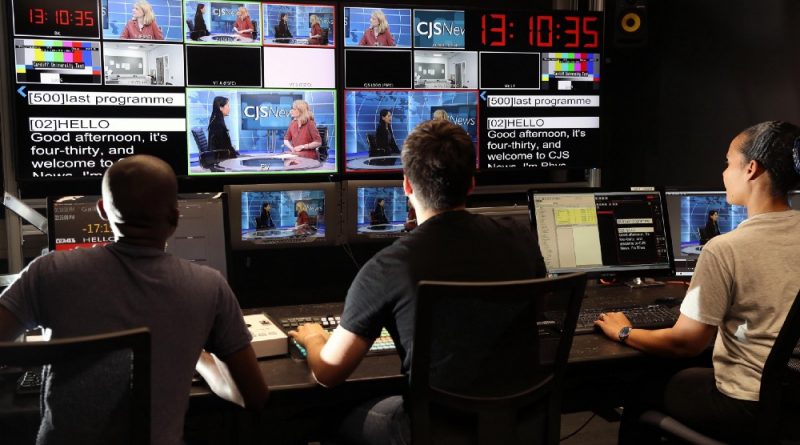 Our postgrad students have nine months to learn how to write news and features, report on their local patch, shoot and edit TV packages, operate a radio studio, develop magazine ideas, understand the essentials of media law, ethics and much more.

But if they are to become the media leaders of tomorrow, the one thing they now need is an ability to navigate change. New technology has transformed the way we consume, deliver and pay for journalism and the rate of change is unlikely to slow down.

“Above all we need to prepare our younger people for change because it’s coming all the time,” says Dan Gillmor, professor of practice and director of the Scripps Howard Entrepreneurial Journalism Institute.

I first met Dan in 2018 when he was running the Scripps Howard Fellowship at Arizona’s Walter Cronkite School of Journalism and Mass Communication. I’d signed up for the week-long course to find out how to build a more entrepreneurial approach to journalism into an already packed teaching schedule.

Sitting alongside educators from across the Americas, we heard from a series of keynote speakers from industry and were introduced to ways to launch and finance new editorial initiatives. And while it was easy to get distracted by bright and shiny new technology, Dan kept reminding us of the importance of revenue.

“Journalists who don’t understand how the business of journalism works are not going to be able to succeed in a rapidly changing business world,” explains Dan, when I catch up with him on a fuzzy Skype call 18 months later. “For a long time we told journalists they didn’t need to know anything about business and that has come back to hurt us.

“I think that was a mistake and now we are going into a hyper-dynamic global economy… and the change in technology and tools and tactics is not going to slow. It’s going to accelerate.”

Our fellowship culminated in each of us delivering a business launch proposal on our final morning in Phoenix. By building from a clear reader need, each five-minute pitch explained how the product would solve a problem and most importantly where our revenue would come from.

“It is important that students understand something of revenue models… there is no one single revenue model but more likely a mixture of things that an organisation or an individual can rely on,” says Dan.

The business pitch was the highlight of our week: a simple assignment that helped us synthesise what we had learned. We each developed our idea using a Business Model Canvas, that has become the most important tool that I now use when teaching innovation in the classroom.

It forces students to start with a reader need or customer problem and builds your idea from there, looking at revenue streams, editorial content and tone, delivery, marketing and business costs. It’s a way to create a business plan for people who don’t want to grapple with spreadsheets and numbers. It’s a tool for building the kind of collaborative communication vital in a modern editorial team.

Getting students to develop innovative editorial business ideas means they can experiment without the fear of failure and that is vital for future of journalism, according to Dan. “We’re seeing a lot of wonderful experiments and whether they end up having legs is an open question… I want to see 50,000 start ups and then let the markets see what ticks,” he explains.

And while the financial risk of failure is low in the classroom, professional media teams also need to embrace ‘failure’ as an opportunity to learn.

“One hopes that enterprises… would make room for things to not work as planned,” says Dan. “A company that has zero tolerance for risk has a low likelihood for succeeding.”

In Arizona, we were also introduced to the Lean Start Up method, that builds learning into every product launch. Each new product is a way to test a hypothesis or an idea around your launch. The idea is to start with a simple prototype that allows you to test an assumption about your audience. Each iteration learns something new and allows you to take the next step in your product development.

It’s hard to build this into the classroom, but there are ways to get students to test, measure and iterate. We got students to work as editorial consultants for magazine teams at Bauer and Immediate Media and there a Pinterest board became a way to test how social media could drive readers towards making purchases through a website. Facebook pages become ways to build a community around a potential product launch and test content, without having to commission a single feature. The digital tools are there for students to ask genuine questions and test ideas with audiences.

And this kind of experimental approach is paying off in industry. “BuzzFeed is one of those places where you see some remarkable activity and again they were sort of designed from the ground up on the idea that this would be about innovation,” says Dan, who believes that a culture of testing and measuring is central to successful innovation within editorial teams.

“I think everyone watching the field looks at the experiments going on at the Washington Post. As you would expect they are doing some remarkable stuff. Of course they are, it’s owned by Jeff Bezos who is more data orientated than anyone.

“Analytics is part of a process of trying things, keeping what works and tossing out what doesn’t.”

And while there is no one business model that is going to save journalism, Dan believes there are signs for optimism.

“I think memberships are going to be one of the major funding sources for journalism. It is working nicely at the Guardian, because they put trust in somebody who has done a spectacular job and who isn’t getting anywhere near the credit she deserves: Amanda Michel. I don’t understand why she is not celebrated throughout the news world. She is astonishing.”

And on a smaller scale, co-operatives like the Bristol Cable are also proof that different ownership and funding models can deliver success. With 2000 paying members, who are all able to influence the paper’s editorial direction, it has knotched up some investigative reporting successes that have been picked up by organisations such as the BBC.

It’s a model that Dan would like to see replicated in his own home town, an area near San Francisco that he describes as a media desert: “I am dying to come over to the UK and take a look at that because I’ve had this uninformed belief that co-operatives are a key part of the future of journalism but of course I have no evidence for that apart from a wish it was true.”

So the mantra of ‘test, measure and learn’ is one that we are now bringing into journalism innovation sessions at Cardiff University. It’s a skill that deserves its place alongside news writing, interviewing and media law. We are also finding ways to experiment with new technology and platforms as they arise. As a former tech reporter, Dan believes every journalist should develop a deeper understanding of the technology that is driving change in our industry.

“Technology is basically part of everything we touch and do at this point and our lack of understanding of how it works in basic ways leads to a major flaws in the journalism about it,” he says. “It’s not that journalists have to become programmers. What they need to do is to understand how to talk to programmers and realise that most things we touch have microprocessors and memory and are connected to the world outside via networks. That has major implications for everything we do.”