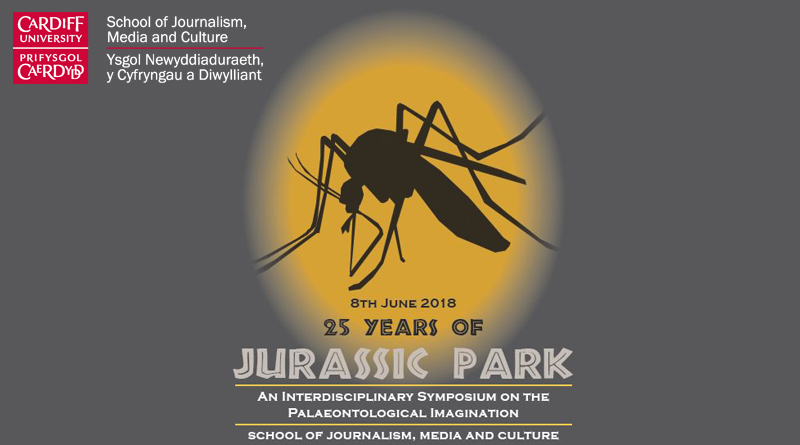 This Friday, myself and Dr Lucy Andrew, a colleague from University Centre, Shrewsbury, will host a one-day symposium entitled 25 Years of Jurassic Park: An Interdisciplinary Conference on the Palaeontological Imagination within JOMEC.

The aim of this event is to bring together scholars from a diverse range of disciplines to examine the impacts and legacies that Jurassic Park (Spielberg, 1993) has contributed towards in the quarter-decade since being released.

In this post, I aim to highlight that, despite its enduring cultural visibility, academic discussion of Jurassic Park has been inhibiting and resulted in many aspects of both the film and its wider franchise being negated by scholars. The time is right to re-evaluate Jurassic Park as doing so can point towards new avenues for researching both film and wider media discourses relating to natural history and the prehistoric. Before doing this, a few locators are necessary to either remind or introduce you to Jurassic Park’s significance.

Directed by Steven Spielberg, Jurassic Park opened in the UK on the 8th June 1993 (exactly 25 years on from the date of our conference).

The film was 1993’s highest grossing movie at the global box office, easily out-performing rivals including Mrs. Doubtfire (Columbus, 1993), The Fugitive (Davis, 1993) and Sleepless in Seattle (Ephron, 1993), and became an instantaneous example of blockbuster filmmaking.

Whether it was the film’s iconic logo, its special effects, John Williams’s instantly-memorable score, or some other aspect of either the film or its marketing, the year was dominated by the imagery and sounds of both Jurassic Park and dinosaurs more generally. From one perspective, Jurassic Park emblematized what film scholar Justin Wyatt deemed a ‘high concept’ approach to Hollywood filmmaking. This production strategy aimed for product differentiation and audience recognition by placing ‘an emphasis on style within the films, and …an integration with marketing and merchandising’ (Wyatt 1994: 7).

To give an example of this from Jurassic Park, recall the scene where the camera leisurely pans across an assortment of merchandise in the (fictional) Jurassic Park Visitor Centre gift shop. That’s what Wyatt was getting at.

Given its success at the box office and its emphasis upon commerce, Jurassic Park has inevitably been transformed into a transmedia franchise extending across multiple platforms. The most recent of these, Jurassic World Alive (Ludia 2018), adopts a similar premise to Pokemon Go (Niantic 2016) by employing an augmented reality system where players are tasked with using their smartphone to locate dinosaurs that are freely roaming our towns and cities.

Jurassic World Alive arguably represents a change to Jurassic Park’s transmedia extensions by moving beyond repeating either the movie’s narratives or core pleasures (dinosaurs that eventually breakout of their immediate surroundings to rampage across that terrain) to instead position the user at the centre of the storyline.

Whether this suggests a shift from Jurassic Park as a transmedia franchise (e.g. where elements from one medium are translated to another) to incorporating what Henry Jenkins (2006: 95-6) calls transmedia storytelling, where the ‘story unfolds across multiple media platforms, with each new text making a distinctive and valuable contribution to the whole’, is open to further debate. Additionally, in the years since its initial release, Jurassic Park’s reputation has not only endured but, dare we say, also improved. Whilst critics including Roger Ebert were largely positive about the film in 1993, this stance was not unanimous. For example, Adam Mars-Jones of The Independent commented that the film’s ‘tone is constantly disrupted by an incongruous reassurance’ due to its incongruous fusing of horror with family-orientated drama whilst Rita Kempley of The Washington Post was similarly unconvinced.

Nowadays, partly through both regular television reruns and generational shifts, it’s not an over-exaggeration to say that Jurassic Park is much-loved by audiences. Much like other Spielberg-directed blockbusters like Jaws (1975) and E.T.: The Extra-Terrestrial (1982), the original Jurassic Park has become something of a rite of passage and popular culture shorthand. If you’ve never sat awe-struck whilst viewing a heard of Brachiosaurus’ for the first time, or trembled with nervous anticipation upon realising the goat has gone, then, frankly, you’ve missed out.

Jurassic Park in the Academy

As the above mention of Wyatt’s arguments concerning ‘high-concept’ cinema imply, Jurassic Park’s reputation and visibility within scholarly debate reflects neither its popularity nor its enduring status. Whether it be as a filmic text, transmedia franchise or cultural phenomenon, Jurassic Park’s multiple iterations have not been studied in their own right.

Instead, much of the academic work discussing Jurassic Park has adopted a generalized focus which takes in only the first film and positions this as emblematic of negative trends within Hollywood production cultures.

For example, Paul McDonald and Janet Wasko (2008: 2) read the film’s aforementioned genre fusions from an economic perspective by arguing that these strategies enabled the film to appeal cross typically divergent audience tastes whilst Peter Krāmer (2002: 195) only mentions Jurassic Park to highlight its ability to generate revenue in secondary markets like home cinema.

Similarly, and echoing Wyatt, Constance Balides (2000: 160) infamously slammed Jurassic Park for ‘celebrating commercial success’ due to its simultaneous mixing of on- and off-screen branding. Sheldon Hall (2002: 23) has also furthered this reading of the movie, arguing that the film(s) exemplify how ‘ancillary media [e.g. promotional material – RPG] have …extended an influence on the generic forms of blockbusters’; for Hall, theme park rides provide the non-filmic marketing kernel in this instance.

The ideologies underpinning these discursive framings of Jurassic Park are easily-identifiable: when Jurassic Park has been mentioned in Film and Cinema Studies, it is typically within a financial mode of analysis.  Consequently, whilst the films represent a taint on some ‘purer’, non-commercialized notion of film-making, the audiences that consume them are positioned as ravenous and unsophisticated cultural ignoramuses (Balio 2002) who choose to revel in a franchise that is devoid of artistic merit and, worse still, reeks of market forces. In short, Jurassic Park is the ‘bad object’ which is used as a contrast against something ‘better’ (see Thompson 2003).

Towards the Palaeontological Imagination…

These dominant perceptions of Jurassic Park (both the first movie and the wider franchise) are unhelpful as they shut down other ways of exploring the property’s cultural meanings. For example, Jurassic Park has arguably played a significant role in contributing towards public ideas and expectations concerning the look and meanings of dinosaurs, palaeontology and natural history more broadly.

Recognizing this point provides one starting point for addressing Jurassic Park’s role in shaping what I have named ‘the palaeontological imagination’. How else can we explore this concept?

It is not an exaggeration to posit that the Jurassic Park franchise has helped to maintain the continued visibility of dinosaurs on other media platforms in the years since 1993. For example, think in relation to television. Whilst representations of dinosaurs had previously graced fictional television, these were deemed inadequate at the time and have since come to exemplify what Charlotte Brunsdon (2004) has called ‘mass camp’ readings of ‘old’ television.

These are where audiences position the aesthetics of shows from previous decades as objects of ridicule for the purposes of reassuring themselves that, within the context of the present, they are more sophisticated than their historical peers. For evidence of these ideas, watch the clip below taken from the 1974 Doctor Who story ‘Invasion of the Dinosaurs’ and reflect on your own reactions. Jurassic Park’s photo-realist T-Rex this is not.

In comparison, the BBC’s hugely-successful Walking with Dinosaurs brand – justified as part of its programming strategies to mark the turn of the new Millennium – is easily locatable in relation to the assumed pleasures offered by Jurassic Park.

Although factual in its outlook, the original Walking with Dinosaurs mirrored the films by combining animatronic work with (then ground-breaking) CGI effects to achieve heightened claims to ‘realistic’ representations of its prehistoric creatures.

Similarly, when ITV was faced with producing a drama series in the mid-noughties to counteract BBC One’s successful revival of Doctor Who, it turned to dinosaurs and fused these with a time travel premise to create Primeval.

Such instances point towards other ways in which the palaeontological imagination works as industrial intertexts which are malleable and serviceable to specific institutional-historical needs.

In the case of Walking with Dinosaurs, aspects of Jurassic Park were employed as public service-orientated signifiers of public value and market differentiation whilst for Primeval these provided a reliable base from which to launch an original family drama aiming for popular appeal.

These industrial appropriations of Jurassic Park in television demonstrate a possible starting point for thinking through the role and meanings of special effects, natural history-themed programming and television aesthetics in different production and reception contexts.

At the same time, moving beyond Film and Cinema Studies’ discursive framing of Jurassic Park should also involve addressing the film’s audiences as a vibrant and multi-faceted participatory culture has formed around the franchise.

For example, within digital contexts Jurassic Park has been re-appropriated for multiple purposes ranging from the humorous (e.g. manipulated GIFs of Dr Alan Grant (Sam Neill) appearing to recline on the bare stomach of Dr Ian Malcolm (Jeff Goldblum)) to direct political commentary. Malcolm/Goldblum’s line of ‘That is one big pile of shit’ featured – and continues to feature – in reaction to the current political climate in the US with this meaning being far-removed from its original deployment within the first Jurassic Park movie.

Jurassic Park’s participatory cultures extend to offline material participation as well, such as merchandise collectors, screen-used prop curators, and those who produce detailed replicas of the modes of transport seen within the films. This summary of practices intersects with current areas of debates within Fan and Audience Studies but, in comparison to other franchises like Doctor Who, Sherlock and Supernatural, are absent from the existing literature.

Linking these with the idea of the palaeontological imagination points would provide an understanding how and which audiences form participatory cultures around natural history and the significance of Jurassic Park within these.

The points that I’ve outlined here are only some of the ways that re-evaluating Jurassic Park can enhance and further debates across a variety of disciplines in Media and Cultural Studies; there are inevitably others.

To begin exploring these, scholars need to move beyond purely commercially-based understandings of the franchise to instead consider its texts, adaptations across media, and role in contributing towards the palaeontological imagination across different contexts of production, marketing, consumption and participation.