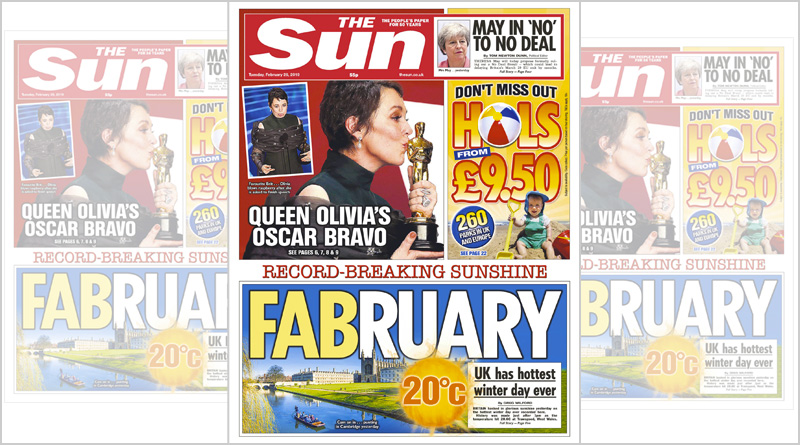 It is perhaps a consequence of the relentless pace of modern life that the unseasonably warm weather we experienced just over a week ago has very nearly been forgotten. As Storm Freya provides us with weather conditions much more familiar to this time of year, it’s worth looking at just how the mainstream media reported this late February “scorcher”.

On Tuesday 26th of last month, the BBC 6 O’clock news programme Wales Today had reporter Ben Price dispatched to sunny Barry Island where the focus was on sand castle building, tanning and the positive effects on local businesses. Though Price did mention the Met Office analysis which pointed out that in the last half a century winters had got progressively milder, he also stated the Met Office assurance that no “heatwave, storm or flood can be directly linked to global warming.”

The tone of Price’s report was overwhelmingly upbeat –  in Aberaeron there was a sense of “tranquillity around the Marina” and in his weather report at the end of the show, Derek Brockway highlighted that temperatures had reached 20.8°  Celsius in Porthmadog, which represented the warmest winter day ever in Wales.

To be fair to Brockway, there was an attempt to describe why we were in the midst of this heatwave and his tone and delivery suggested the seriousness of his approach. In the Western Mail  Thomas Deacon  attempted to place the sunshine in its proper meteorological context. Deacon referred to Climate change experts saying average temperature rises we’re more likely to see more extreme weather events. He also quoted Swansea University geography Professor Mary Gagen, who not unreasonably pointed out:

“It is lovely having an ice cream in February, but if this carries on we could see millions of pounds of damage, lives taken and the extinction of species across the world.”

But if you relied entirely on the UK tabloid press for your information though, you could be forgiven for thinking that the months of February and July were joyfully interchangeable. On 26th February, alongside photographs of people shimmering in the summer heat, The Sun reported that we were “basking in it”, elsewhere offering advice on coping in a heatwave:

“The public are encouraged to keep an eye on vulnerable friends, family members and neighbours who may struggle to cope in the extreme heat.”

The Mail online was, for the most part, similarly upbeat. On 25th of February, we were told that parts of the UK were hotter than the likes of Malaga, Rome and the Algarve whilst assorted images showed smiling, carefree children in parks or beaches thronging with life. At least the Mail did attempt to counter the imagery with some concerned voices. Green Party MP Caroline Lucas was quoted, calling on the Government to ‘wake up to this crisis’, declare a ‘climate emergency’ and transform the economy to prevent ‘climate catastrophe’.

In the Independent  Lucas wrote an article of her own, stating that the media narrative around the 20C ° heat needed to shift from celebration to concern. Whilst In the Guardian, Jonn Elledge, assistant editor of the New Statesman, expressed similar anxiety. He wrote of his dismay at the BBC tweeting out the high temperatures in Ceridigion (very (very) briefly the highest ever temperature ever recorded in Britain) with a gif of the sunshine icon and the “same excitable breathlessness with which Springwatch would announce it had found a new type of vole”.

But Lucas has also acknowledged that after years of calling out the media for “climate silence” there have been “incremental improvement” in how the subject has been covered. This is something also acknowledged by Climate Home News – an independent news site dedicated to climate stories.

They argue that in respect of the extraordinary temperatures last summer it was clear to see, in newspapers and on television, that there was a willingness to make the connection between the unusual weather and global warming trends

I think this is evidently the case. Yes, we still have front pages, such as the Sun’s “RECORD BREAKING SUNSHINE – FABRUARY  which seem woefully inappropriate but there does seem to be a resolute effort across most media to provide a critical context for climate change.

As Leo Hickman, editor of Carbon Brief , has noted, coverage now better reflects scientific consensus. Speaking to Climate Home News about last summer’s heatwaves he said, “[It] has lacked that false balance we used to see five or ten years ago. All of the doubting is being left to the op-ed columns.”

Will the true voice on climate change please stand up? 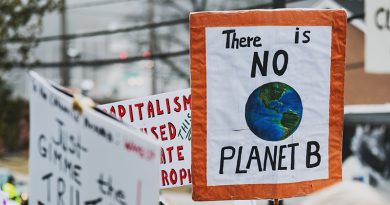