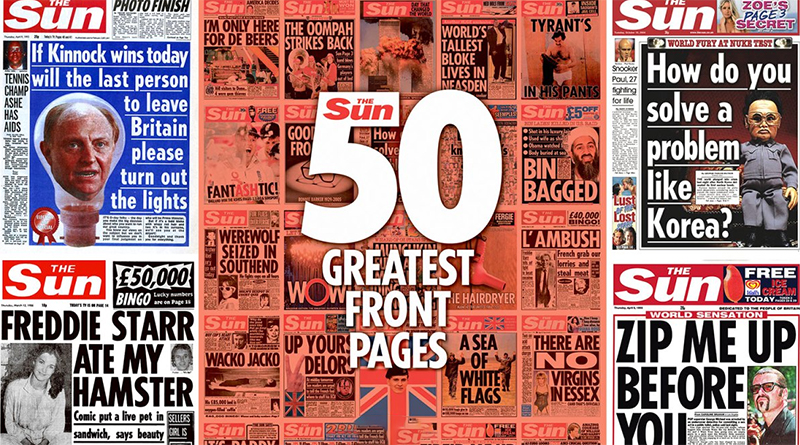 Over the past week or so the Sun newspaper has been celebrating its 50th birthday with a series of public relations measures designed to illustrate its colourful history and ongoing commitment to the rich fabric of British life. There’s been the vote for the most popular front page, the launch of the special £1MILLION Sun Readers charity fund and a trawl back through the “biggest showbiz exclusives” of the last 50 years.

It is slightly disingenuous to insist that the Sun is celebrating a half century. More accurately the paper  is 55 years of age – emerging  as it did in 1964 from the ashes of the Mirror Group’s Daily Herald. What is really being celebrated is its launch as a tabloid by Rupert Murdoch, who bought the title for £600,000 in 1969.

What cannot be disputed, though, is its impact on British journalism and by extension, British life. The birth of the tabloid Sun ushered in a period which saw mass market newspapers move to the political right with a decrease in the coverage of “serious” news issues. This was allied to, if we are to believe the testimonies of various Murdoch employees, an increase in proprietorial interference in editorial decisions.

As Chippendale and Horrie make clear in their wonderful book, Stick it Up Your Punter – the Uncut Story of the Sun Newspaper, readers were promised something very different from the new Sun in 1969. The first edition printed on 17th November of that year, was heralded with banner headline in the previous Saturday’s paper, which proclaimed, REACH FOR THE NEW SUN:

“The most important thing to remember is that the new SUN will be the paper that CARES.  The paper that cares – passionately – about truth, and beauty and justice”.

This commitment to the irreverent, including “beauty”, was to manifest itself in the creation of the page 3 girl, who first appeared topless and nipples showing in in November 1970. It’s perhaps amazing to think that, even though the Sun still features glamour models in various stages of undress, the topless images lasted as long as they did, with the final bare breasts appearing as recently as 2015.

It’s fair to say that, despite its best efforts to portray itself as the nation’s super, soaraway favourite with “lashings of fun” the paper has always been overtly political.

1979 the Sun urged its readers to vote Conservative and thus began a relationship of mutual support that continued throughout the next decade. There is little doubt that most of the British press gave open and widespread support to a wide range of policies adopted by the Thatcher governments of the 1980’s but it was the Murdoch owned press, however, (The Times, Sunday Times, Sun, News Of The World) that was her closest ally. In fact it’s fair to say that Murdoch used his substantial media concerns in this country to support the Prime Minister, while his companies received direct benefits as a consequence of policy decisions taken by her government.

In the various wars that the UK has been involved in, the Sun has been unflinching in its support for the armed forces. During the Falklands conflict, for example, it was jingoistic, utterly one sided, juvenile and inflammatory. It was the paper that ‘backed our boys’ as it tried to recreate the Dunkirk spirit. There were single word headlines – INVASION! –  There was the infamous and heartless GOTCHA! which reacted to the sinking of Argentine battleship the General Belgrano. There were three word headlines which made war sound like a trip to the swimming baths – ‘IN WE GO!’ –  and a tireless capacity to report war as a series of adventures and high jinks.

Not only did the Sun support Thatcher, it has also gone to great lengths to denigrate leaders of the Labour party. Jeremy Corbyn, as was the case with Ed Miliband before him, gets a torrid time , but  as I’ve noted before , Michael Foot was particularly vilified in the 1980’s. Constantly criticised for being outmoded and shambolic, he was mercilessly lampooned for his decision to wear a donkey jacket to the Cenotaph on Remembrance Day (when he wore nothing of the sort – it was, in fact, a smart coat chosen by his wife Jill). This most principled of leaders was completely unsuited to running an election campaign in 1983 against the sophisticated Thatcher media machine and a particularly feral Kelvin Mackenzie-edited Sun , which asked, incredulously: “Do you seriously want this old man to run Britain?”

It’s never been a stranger to controversy, either and its most shameful episode is undoubtedly the coverage of the Hillsborough disaster. On April 19, 1989 four days after the disaster occurred, The Sun printed its “THE TRUTH” edition, where its front page alleged that Liverpool fans had stolen from the bodies of the victims, urinated on “brave cops” and, in a particularly appalling piece of fantasy which I quote in full, alleged that:

In one shameful episode, a gang of Liverpool fans noticed the blouse of a girl trampled to death in the crush had risen above her breasts. As a policeman struggled in vain to revive her they jeered: “Throw her up here and we will **** her.”

In their book on the Sun, Chippendale  and Horrie describe the atmosphere inside the newsroom in the Hillsborough era under the editorship of Kelvin Mackenzie.

It was a place, they write, of terror – where the editor’s personality dominated to such an extent that even though there were grave misgivings about the accounts of what happened at Hillsborough (none of the allegations, of course, were attributable) journalists felt intimidated and powerless to object to the terrible smears.