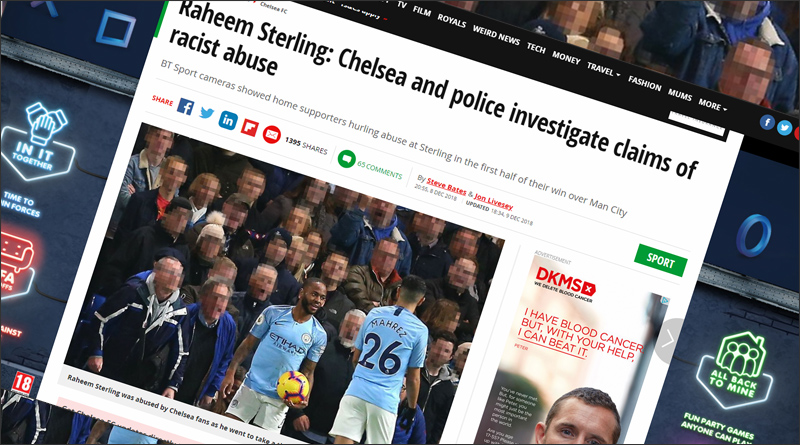 Last Saturday’s top of the table premiership clash between Chelsea and Manchester City featured the nauseating spectacle of a group of middle aged white men appearing to racially abuse Manchester City forward Raheem Sterling as he retrieved the ball for a corner.

In footage widely circulated on social media, one of the men, clearly in the midst of some sort of visceral rage, spits out what seems to be an expletive ridden tirade directly at Sterling. On Monday, Chelsea FC announced that it had suspended four people from attending Chelsea matches pending further investigations.

On Tuesday, the Mail Online carried an interview with one of the men under investigation. Colin Wing, 60, accused of calling Sterling a ‘f***ing black c***’ apologised “unreservedly to Raheem” and said that called Sterling a ‘Manc c***’ not a ‘black c***’

Be shocked, but not surprised. What happened to Sterling was only the latest in a spate of very recent events serving to illustrate that racism is alive and thriving in some of Britain’s football grounds.

On December 3rd a man was charged after a banana skin was thrown to the pitch during the Arsenal v Tottenham derby match and on the same Saturday as the incidents at Chelsea, Hearts played Motherwell in the Scottish Premier League where Motherwell’s Christian Mbulu was subjected to race hate described as “dinosaur stuff”. Hearts have since banned two fans from their ground whilst police are examining footage showing, “about 20 fans in the main stand at Tynecastle shouting comments at the 22-year-old as he warms up.”

And this is not the first time Sterling, 24, has been subjected to the vilest of invective. The saddest thing, as journalist Carl Anka has illustrated, is that he has been a target for the majority of his young career. This time it is different, though, because he has spoken out about it and argued in an Instagram post that it is newspapers who “fuel racism” and “aggressive behaviour”. He ended by writing:

“for all the newspapers that don’t understand why people are racist in this day and age all I have to say is have a second thought about fair publicity an give all players an equal chance.”

Do some newspapers fuel racism? Does Sterling have a point? According to many journalists, yes he does. There have been a number of heartfelt and honest commentaries this week from some of the UK’s finest sport writers. Daniel Taylor in the Guardian ,Henry Winter, chief football writer of the Times, Darren Lewis at the Mirror all considered their professions and their own behaviour. Dave Kidd, writing in the Sun, captured the mood, writing,

“Is it possible some newspaper coverage of Sterling and other black players feeds into the treatment he gets from supporters, some of whom may be aggressively racist? Yes…..Newspapers can also do more. Journalists should always be trying to understand the world more fully.”

Let’s consider the historic nature of newspaper reporting of black footballers. How do we define racist treatment? Broadly, it’s in the way in which black footballers have received different treatment because of their perceived physical, intellectual and social differences to white players.

The first thing to say is that black sportsmen are, in the words of academic Colin King, “framed through their physicality” in a way that white players are not. As Carl Anka observes, think of how we talk about black athletes. Strikers are ‘beasts’. Defenders are ‘animals’. All too often black players are viewed in an animalistic prism. This in turn leads to the assumption that the black body rules the mind and that players are somehow defined by their speed or strength and not by their football intelligence.

Then there is the reporting of lifestyle. Young black players are criticised for their “bling” lifestyle and their perceived inability to treat money with the respect it deserves.  One of the things that Sterling drew attention to in his Instagram post was the way in which the Daily Mail reported how two young footballers at Manchester City had bought houses for their mothers. The story about Phil Foden, who is white, has the headline: “Manchester City starlet Phil Foden buys new £2m home for his mum.” The story about Tosi Adarabioyo, who is black, runs with the headline: “Young Manchester City footballer, 20, on £25,000 a week splashes out on mansion on market for £2.25million despite having never started a Premier League match”.

It’s clear to see what’s happening. Foden is named in the headline accompanying his picture; Adarabioyo is not. Foden buys for his mum; Adarabioyo “splashes out”. Attention is drawn to Adarabioyo wage; it’s not mentioned in respect of Foden. The relative youth of Adarabioyo is highlighted whilst Foden is a “starlet”.

Adarabioyo is being “othered”. He’s denied the same characteristics afforded to Foden. That of personalisation, respect for his mother, the dignity of generosity. The implication is that he’s not worked for such rewards and does not have the sense to spend his money well.  As Sterling writes:

I think this in unacceptable both innocent have not done a thing wrong but just by the way it has been worded. This young black kid is looked at in a bad light.

“We cannot ignore the fact elements of the newspaper industry propagate covert and overt racism. Not against ALL young, black footballers but against those who don’t fit into an historic white, middle class view of ‘knowing their place.”

Where does all this come from? It’s a difficult question to answer in a limited amount of words, but as with everything else, we should look to British history. The legacy of imperial and racist ideologies is long lasting. Our educational systems are steeped in the notions of British righteousness and superiority. According to Amir Saeed, throughout the years Britain’s black and other ethnic minorities have tended to be portrayed in terms of a limited repertoire of representations and within contexts characterized by conflict, controversy and deviance.

So what’s to be done in the newsrooms? Diversity of staff is an obvious start. More black and ethnic minority reporters unwilling to resort to familiar tropes, more editorial staff willing to abandon accepted practices and embolden their writers. For the record, I don’t think that any newsroom – or University, for that matter – harbour active, misanthropic racists. It’s more that an unconscious bias is prevalent. According to the Equality Challenge Unit, unconscious bias is when we make decisions and judgements without realising their impact and implications. These decisions are usually influenced by our background, environment and personal experience.

In reality these issues are of relevance to everybody. As Sterling’s manager at Manchester City, Pep Guardiola noted, racism is everywhere, not just in football A recent report in the Guardian  on race surveyed 1,000 people from minority ethnic backgrounds and found “they were consistently more likely to have faced negative everyday experiences – all frequently associated with racism – than white people in a comparison poll.“

Just about the only good thing to emerge from Raheem Sterling’s hideous experience is the debate and realisations it’s engendered.