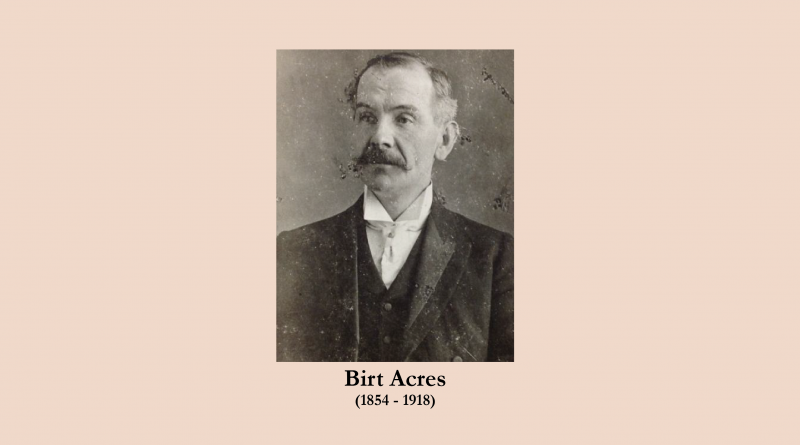 Finally, the sentimental moment has come.

As JOMEC will soon move out from the iconic Bute Building, I hope this blog post will stay with our memories of this ever inspiring place and linger in the digital archive. Lectures after lectures, talks after talks delivered at the Birt Acres Lecture Theatre, it is time to rediscover some stories about Acres the person, who the theatre was named after.

Birt Acres (1854 – 1918) was the first man successfully to project a 35 mm film publicly in England, and quite possibly in Wales too. The American/British photographer, inventor and film pioneer was born in Richmond, Virginia in America to English parents. Acres started to work in London as a photographer in 1889 and met with another British film pioneer Robert Paul in the next decade. After a controversial work relationship with Paul, they soon parted from their short collaboration. Acres then turned his focus to film projection and exhibition, when the technology of film projection itself was part of the main attraction for the general public at that time. Historian Richard Brown has written a more in-depth introduction in “Who’s Who of Victorian Cinema” for Acres’ biography.

What was Acres’ relation to Bute Building and to Cardiff more generally? This is the first article which reveals the Welsh side of stories.

Although based in London, Acres was a regular visitor to Cardiff for his public demonstration of films and film equipment, particularly during his national tour between 1896 and 1899. If we pay attention to the memorial plate outside Birt Acres Theatre at Bute Building, it states that ‘Birt Acres gave the first public projected film screening in Wales at Cathays Park on May 5th 1896’. This plate was awarded in 1996 for a celebration of the centenary of cinema history, and it indicates the very reason why the theatre was named after Acres. However, during the research for this article, I have been finding difficulties to locate evidence for the actual event mentioned on the plate. Instead, I discovered that Acres’ first public film screening in Cardiff surprisingly took place one month earlier than the date stated. This event was reported in the Evening Express on April 11th 1896:

Mr. Birt Aces, whose pioneer efforts in photography have made his name a household word among photographers all over the kingdom, gave a demonstration of the powers of his remarkable invention, the kineopticon at the South Wales Art Gallery, Cardiff, on Friday evening. There was a large attendance, invitations having been issued by the Cardiff Photographic Society. Mr. S. W. Allen, in introducing Mr. Aces, said that the instrument had created a sensation in London and many of our large towns, but remarked that the pictures about to be thrown upon the screen by Mr. Aces would be more sharply defined if the electric light could have been utilised instead of limelight. Visitors to the Cardiff Exhibition, however, would have an opportunity of seeing these wonderful photographs with all the advantages of electricity, and Mr. Aces would give frequent demonstration in the model of the old Cardiff Town Hall. (Evening Express, April 11th 1896, p.3)

The later event which took place on May 5th 1896 (as stated outside Birt Acres Theatre) awaits further research to locate evidence. However, Acres continued to return to Cardiff regularly to exhibit his films and film projection equipment. According to the archival evidence, Acres was a very popular figure or ‘the man of film’ in Cardiff, as documented by this news coverage in the Evening Express on May 13th 1896:

Cardiff is considerably blessed in the matter of up-to-date photography just now. At the Exhibition Mr. Birt Acres is showing the kinetroscope, and the Empire M. Trewey is demonstrating the capabilities of the rival cinematographe. In each case the sea views are, in my opinion, the best (Evening Express, May 13th 1896, p.2).

Acres was invited by the Cardiff Photographic Society to visit Cardiff in June 1896, where he presented several of his films at Cardiff Exhibition. While on tour, he managed to secure an opportunity to film the royal visit of the Prince and Princess of Wales to Cardiff. He then returned to Cardiff once again to engage with the public in September during the same year:

There is a treat in store for patrons of the “Kineopticon,” in Old Cardiff. Those of our readers who attended the recent military tournament may have noticed an arrangement similar to a diminutive barrel-organ at work in front of the grand stand. This was Mr. Birt Acres’ kinetic camera, and, instead of grinding out popular tunes, was taking the infinitely more popular animated photographs. At each revolution of the handle twenty photographs were taken, and in all some 1,000 ft. of pictures were obtained. The result is a magnificent series of films, which are equal to those taken by Mr. Aces on the occasion of the Royal visit to the Exhibition. The latter were shown at Marlborough House, and created such a sensation that Mr. Aces was given facilities for taking photographs of the wedding procession on the lawn at Marlborough House and Buckingham Palace. (Evening Express, September 3rd 1896, p.2)

A confusion needs to be clarified here. The memorial plate outside of our Lecture Theatre at Bute Building acknowledges Birt Acres for giving the first public film screening at the Fine Art, Industrial and Maritime Exhibition in Cathay Park, 1896. Because the actual event venue on the plate was not specified, people sometimes may assume the current theatre was the venue which hosted that particular event. However, Bute Building was built in 1913 and opened in 1916 as Cardiff Technical College, it could not have hosted this event which took place in May 1896. Whether the theatre was named “Birt Acres” from the opening of Bute Building that requires further investigation. However, it is quite possible that the Lecture Theatre was only named much later than Acres’ regular film exhibitions in Cardiff. Cardiff University’s own Institutional Archives would hold some records regarding the naming of the theatre. Unfortunately, I have been trying to contact them since 2016 for the purpose of writing this article with very little luck to get a response. Perhaps others who are equally interested in this topic can continue the historical investigation with additional efforts.

Apart from our usual lectures and public talks across disciplines, Birt Acres Lecture Theatre continues to be film enthusiasts’ choice as the secret cinema at Cardiff University. It is home to several film festivals and film clubs.

Cinema history rolls on, and you shall be missed.