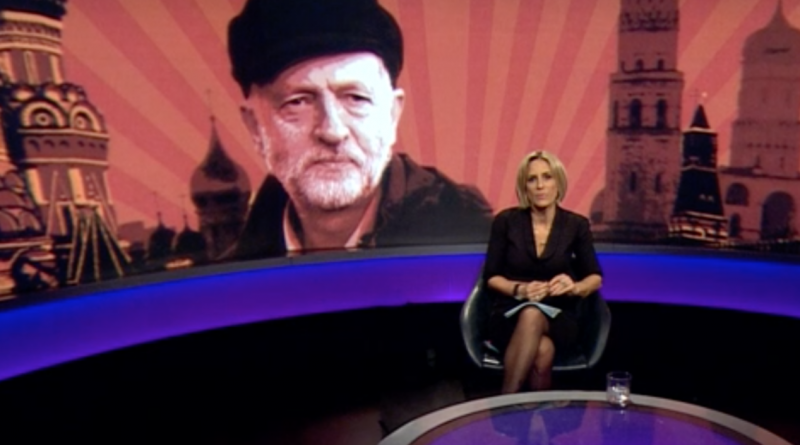 On March 12th, Prime Minister Theresa May made a Parliamentary statement about the Salisbury nerve-agent attack on a former Russian spy – and Jeremy Corbyn, as leader of the Opposition, replied. However, he did not directly criticise Russia, suspected of the attack, and as a consequence Tory MPs and many of his own backbenchers expressed dismay at his refusal to do so. That evening, Newsnight, the BBC 2 Current Affairs programme, had a studio discussion about Jeremy Corbyn’s position on Russia – and used a studio graphic which combined a picture of him set against the Kremlin. Cue outrage.

Labour supporters accused the BBC of bias saying it had deliberately manipulated the image to make him look “more Russian”, had changed his hat to make it look “more Russian” and that it clearly betrayed anti-left bias on the part of the BBC by attempting to portray Corbyn as a Russian fellow traveller .

These complaints took off across social media. As the Guido Fawkes site reported, they had a combined social media reach of more than 2 million (about four times Newsnight’s audience) – set against a BBC rebuttal which reached about 2,000. For many, it was incontrovertible proof of a malicious anti-Corbyn agenda at the BBC. The BBC, of course, said it wasn’t. They explained it was a standard Moscow background used in the studio – and had Defence Secretary Gavin Williamson’s face on it only a week or so before (although admittedly not graphically treated in the same way). Channel 4’s Fact Check site looked at what had happened and even conducted experiments to see if JC’s hat had been “stretched” to look more Russian. They concluded it was the curvature of the studio which made it look different.

Indeed, these kinds of treated – or “manipulated” – graphics are standard on the programme across issues and political parties. But a week later the social media outrage was still running and – predictably – RT (Russia Today) was stoking the flames. Much of the heated debate being about the esoteric nature of image manipulation – which isn’t really the point – and how “Russian” a hat can be.

This decidedly odd affair illustrates three points (and I should acknowledge that as a former Director of BBC News I have a sympathetic perspective.)

First, it shows how the public no longer understand (if they ever did) the grammar of television. The studio set graphics are an illustration, with artistic licence, designed to capture in some way the issue being discussed. They are not – and never have been – photojournalism with an expectation of literal accuracy. They are more akin to a news magazine cover or a cartoon. But many viewers simply don’t recognise that and much of the outrage was about a “fake image”. The graphic treatment and colourising is precisely to indicate it is a graphic not a still photograph of course. It is not the only area of TV grammar that is inadequately understood. Increasingly the professional judgements offered by correspondents are mistaken for personal views and the “devil’s advocate” interviewing technique is mistaken for bias. TV has to make some efforts to more clearly signal what it is doing and why – editorial transparency – if it is to hang on to trust.

Second, it illustrates the continuing politicisation of the BBC in an era of polarised politics. Today, the political faithful believe that “either you are with them or you are against them.” There is no room for a neutral middle ground – the space that broadcasters in the UK have to occupy by regulation. Polarised politics makes life difficult for an organisation like the BBC. I could also have written about the leaked WhatsApp messages from leading Conservative politicians complaining in similar terms about BBC bias. C’est la vie.

Finally, it shows how political movements have harnessed social media to spread their message with great speed and efficiency. In this regard they are ahead of the professional media. That may not matter and may even be a good thing – unless ethical lines are crossed. But that’s another story.

Anyone who has worked in the BBC knows how ridiculous such conspiracy theories are. The organisation does not work that way and, indeed, anyone attempting to pursue a political agenda would quickly be rumbled given the intense internal reviews that take place. Editorial power is highly dispersed, decision making highly delegated, programme agendas diverse. Of course, many will choose not to believe that because  – as with so much at the moment – they prefer to be led by hearts rather than heads.

And outrage and bullying can have an effect. I suspect Newsnight graphics may be more muted for a while, which in my view would be a shame.