On Tuesday 24th September, @DMReporter, a twitter feed dedicated to exposing the quotidian absurdities of the Daily Mail, held its’ first annual ‘Don’t Read the Daily Mail’ day. The DM reporter blog announced that they were issuing this call to disarm because, even though they were committed to exposing the ‘hypocrisies and bigotries’ of the paper, all this was really doing was ensuring that the Daily Mail website got more hits and therefore more advertising revenue.

Even though the initiative seemed to be supported in great numbers, DM reporter may have had a point about hits and revenues. Because, by complete coincidence, on Wednesday 25th of September DMGT Media, the owners of the Mail, announced a huge leap of 45% in online ad income over the last year for its newspaper websites, including Mail Online.

There is no doubting the popularity of the Mail Online. In January 2012 the BBC reported that it had overtaken the New York Times website as the most visited newspaper site on the web and last December ComScore data mine stated that, ‘644 million people worldwide accessed online newspaper sites in October 2012, making up 42.6% of the total internet population. Mail Online was the most popular online newspaper, attracting more than 50 million unique visitors during the month.

And it keeps getting bigger – in August of this year, the Guardian reported Audit Bureau Circulation figures which conveyed that Mail Online had set a new global record of 134 million web traffic users in July, drawn in by news stories including the birth of the royal baby and assorted celebrity deaths. In a press release quoted on journalism.co.uk, the Mail said July was its ‘best ever month’ for online traffic and that it had its ‘best ever day’ on 22 July, with a reported 10. 6 million ‘global unique browsers’.

So why are people flocking to the online edition of a newspaper described as evil by many (see journalist Martin Robbins superb PowerPoint presentation on the subject here) and as dangerous by many more?

We must face the facts – it is evidently true that huge quantities of people want to see how super slim Jennifer Lopez is looking. They want to see Kanye West out shopping and they want to see the ‘shocking face of a binge drinking young mother’. According to Martin Clarke, the editor of Mail Online : ‘people are addicted to it. It’s like journalism crack.’

This may be overstating the matter, but not by much if reader comments are anything to go by.  One response to a vitriolic demolition of the Mail by Daniel Stacey said in mock horror, ‘I read DM every day and can quite frankly say that I’m sadly addicted! I should really get a hobby, eh!!! There is endless reading about interesting and useless stuff. There is also the racist/classist/sexist/homophobic/nationalistic stuff that is clearly designed to generate the most vitriolic of reader comments! It does make you feel sad about humanity though. But I can’t stop reading…..please help!

Hyperbole of course, but the notion of ‘endless interesting and useless stuff’ is significant. The Mail Online website is a constantly changing, offering new stories and pictures at a phenomenal rate. It reacts to reader behaviour. As Daniel Stacey points out: ‘the introduction of analytic tools like Chartbeat now allow web editors to view predictive histograms for traffic flows to news articles. Within 20 minutes an editor can tell whether an article is a hit or a flop, and move the article up or down the page. He or she can also see, given regressive analysis of previous traffic trends, when audience will get bored with the article, and consequently when the news tidbit should be banished to the lower reaches of the front page.’

It is important to remember that it is all put together with skill and purpose. Angus Montgomery of Design Week magazine wrote in January this year that, ‘the wordy headlines and lengthy homepage scrolling are there for a reason – they helped shoot Mail Online up the search-engine rankings.’

And In 2012 the digital creative company Brand 42 were tasked with overhauling the Mail’s ‘online brand’  and according to their website they, ‘improved navigation, as well as accessibility, and  introduced a range of unique features such as pop-up previews and interactive elements.

There is clearly a public appetite for celebrity gossip, hysterical commentary, gratuitously violent videos, carefully orchestrated outrage and endless BBC bashing. The fast changing design and editorial monitoring means that the audience can inject the same drug with a different needle many times a day. And, as I’ve written elsewhere, what cannot be denied is that research indicates online news consumers are put off by so called ‘hard news’ stories. A study by academics at the University of Bristol’s Intelligent Systems Laboratory analysed the choices made by readers of online news and found, according to lead researcher Professor Nello Cristianini, ‘significant inverse correlations between the appeal to users and the amount of attention devoted to public affairs. People are put off by public affairs and attracted by entertainment, crime, and other non-public affairs topics.’

Those who monitor press coverage have become used to the Mail’s patterns of presentation and its cynical exploitation. They abhor its everyday racism, casual sexism and rampant, shameless hypocrisy. Ordinary, decent people despise the Daily Mail.  The problem is that millions of ordinary, decent people read it, too.

A new low for the Daily Mail? 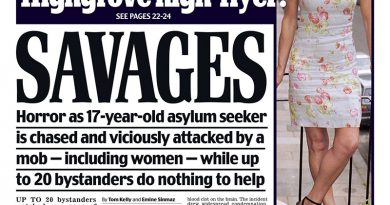