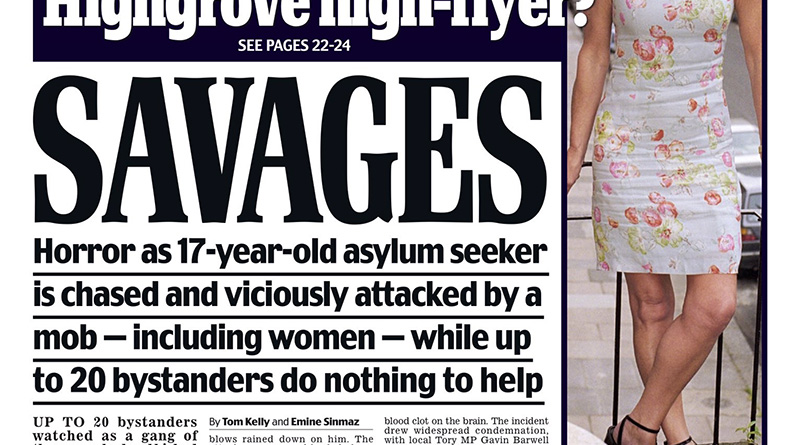 On 31st March a 17 year old male teenager  was assaulted at a bus stop in Croydon, South London. According to reports the victim, who was with two friends, was confronted by gang up to 30 people some of whom proceeded to violently attack him with such force that he was left with a fractured spine, blood clot on the brain and a broken eye socket. At the time of writing, 16 people have been arrested in connection with the crime and 13 have been charged with offences including attempted murder.

Yet another horrible, nauseating illustration of broken Britain, then. An all too familiar scene, which with varying degrees of severity, is sadly replicated across the towns and cities of the UK nearly every weekend.

But what made this case particularly newsworthy were the circumstances of the assault. The 17 year old victim in question is called Reker Ahmed. He is a Kurdish Iranian asylum seeker and according to the police, that is why is he was attacked. Det Sgt Kris Blamires said:

“It is understood that the suspects asked the victim where he was from, and when they established that he was an asylum seeker they chased him and launched a brutal attack.”

The great and the good predictably and rightly condemned the violence. Theresa May called it “absolutely abominable” and the Mayor of London, Sadiq Khan, stated: “Our communities will not be divided by those who seek to sow hate.”

But when the Daily Mail’s front page proclaimed that the attackers were “savages” some commentators were moved to call out the Mail for hypocrisy. Left wing political magazine the New Statesman chastised the paper for belatedly realising that attacking people for their ethnicity was a bad thing. How, it asked sarcastically, could anyone get the impression that asylum seekers shouldn’t be here? That they should not be vilified, demonised and made scapegoats for all of society’s ills? The inference was that the Mail and other right wing papers  had, through persistently negative coverage, helped create precisely the sort of climate where these sorts of attacks could take place.

Well, how much truth is there in these claims?

I think we can say with certainty that for at least the last two decades the right wing press has been instrumental in the demonisation of asylum seekers , whipping up hysteria whilst calling for tighter immigration controls. As far back as 2001, Oxfam reported that although the press could not be held fully responsible for public opinion, the dissemination of myths about asylum seekers and openly hostile statements helped to justify the undermining of the human rights of a group of extremely vulnerable people. A poll carried out by MORI in the latter half of 2000 indicated that many Britons were influenced by negative press coverage  – for example, 80 per cent of adults polled then believed that refugees came to Britain because they believed it to be a ‘soft touch’.

In his report into the ethics and standards of the press in 2012, Lord Leveson concluded that there were enough examples of careless and or reckless reporting to conclude that:

discriminatory, sensational or unbalanced reporting in relation to ethnic minorities, immigrants and/or asylum seekers is a feature of journalistic practice in parts of the press, rather than an aberration.

As I’ve written before, for the Mail and the Daily Express  particularly, the asylum seeker is the greatest threat to the social fabric of Britain. An outsider, an invader and a criminal – they are, we are told, seduced by the lure of state offered riches, superior housing and a life of luxury. In her extraordinary analysis of the press coverage of immigration in 2016, Liz Gerard found that for the Express all foreigners were a problem and that since May 2010 it’s front pages had led with immigration stories on 179 occasions.

However, it’s something of a misconception to believe that it is only the right wing press that resorts to stereotyping and stock imagery. The repetition of particular images on television news and current affairs programmes has propagated a set of definitive images that illustrate and inform the immigration and asylum debate in the UK. Report after report shows images of young men -where asylum seekers/refugees are featured they are almost always young men – climbing down from the back of lorries or hanging around in gangs. What is shamefully absent is an attempt to appreciate the main factors for asylum seeking. People are presented in packs – their significance measured against the perceived discomfort and concerns of the British people

It’s no wonder, then, that there is a vast disparity between what the British public believes to be the state of the nation, and the actual reality reflected by sober statistics. Average estimates of the total immigrant population were found to be two to three times higher than reality in 2013.

But there is a light in the black and that is the coverage provided by the local and regional press which consistently provides a more positive angle. The Croydon Guardian has this week been running a series of stories highlighting the area’s refugee network and the togetherness of the community whilst over the years this particular newspaper has regularly attempted to contextualise and explain asylum issues for its readers. Various studies have confirmed that asylum is framed and constructed differently by the local press and that the established discourses of the national newspapers are regularly challenged.

For this we must all be thankful. For whilst it would be plainly wrong to suggest that the coverage of the Daily Express et al is directly responsible for violence and ill feeling it would also be foolish to deny the power of the media to shape our ideas and opinions. Of course there are difficulties with asylum and immigration – but is what is needed is calm and measured debate without prejudice and untruths.