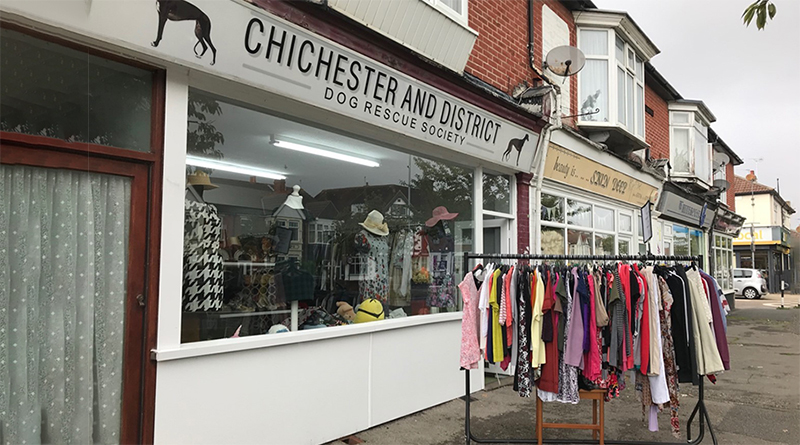 Dr Payson’s Research Seminar is open to all Cardiff University students and staff, and will take place on Wednesday, 13 November 2019, at 16:00 in Room 1.10A, Two Central Square.

For the past six months, I have been going to a lot of charity shops. This is not so unusual for me, an avid thrifter who grew up trawling cavernous Goodwill and Salvation Army warehouse stores in strip malls across the US.

I’ve relished charity shops here in the UK for years. But I have been going to more shops than usual lately, and venturing farther afield. And I have been browsing with sharper attention, snapping photos of shop windows, trying to remember every quirky detail before scuttling off to type up my notes.

I have often been overwhelmed at the variety and quantity of stuff: a child’s hairdressing doll staring balefully from under a towering blonde rat’s nest; an immaculate 1930s hand-crank Singer sewing machine; tattered polka and soul and 80s pop records; a blue porcelain soup tureen; at least 17 copies of Love Actually; acres of polyester tops and dresses from the same ten brands; a museum’s worth of slow cookers and sherry glasses; packs of new pants and socks next to mugs celebrating the Queen’s various jubilees, or shaped like a football or a hippopotamus, or printed with a periodic table of obscenities.

Charity shops are apparently everywhere because they are everywhere. According to the Charity Retail Association, the number of charity shops in the UK has nearly doubled every decade since the mid-90s, and has been hovering around 11,700 since 2017.

Used by many and loved by some, charity shops recirculate thousands of tons of castoff material culture – winter coats and glittery heels, plastic toys and vintage teapots, vinyl records and DVDs, school uniforms and sofas.

But as precarity and poverty worsen and public services recede under austerity, charity shops have also come to play an expanding role in what Patricia Mooney Nickel (2016: 173) calls the ‘welfare mix’: the loose array of agencies, organisations and relationships on which people actually rely for their everyday livelihoods.

So if overwhelmed and sometimes wearied by the avalanche of stuff in charity shops, I have been surprised and intrigued by what people are doing here. While I am sure some shops get ‘ransacked’ by style-hungry shoppers, as Angela McRobbie (1989) described it, picked over by middle-class young women hunting (as I do, sometimes) for dresses, in most of the shops I have visited people seem to be up to something different.

That difference is part of what I’m interested in: what kinds of work or labour are happening in these spaces, and in particular, how people are using them to get by, make do and live together as inequalities and social welfare cuts deepen. (Elsewhere in this three-year research project on charity shops under the austerity economy, I also explore how charity shops appear in the news, public discourse, and popular culture, from Mary, Queen of Charity Shops (BBC2, 2009), to the mockumentary web series Charity Shop Sue (YouTube, 2019).

Delyth Edwards and Lisanne Gibson (2017) argue that charity shops are not only sites of consumption, but used like libraries, as sites of local connection and resources, and as craft supply stores. Jen Ayres (2017) tracks the creative ways shoppers pick through thrift stores as independent income-generating ventures in precarious times. Triona Fitton (2013) describes the ‘quiet’ connections of charity retail to other, perhaps unexpected sectors: social services, for-profit retailers, the police, prison and probation systems. Ruben Flores (2014) writes about the emotional side of the care work that volunteers do, framed as labours of compassion.

In the seminar this week, I explore how charity shops serve as important sites of different forms of cultural labour typical of the austerity economy. Drawing on debates in feminist economics, cultural studies, and cultural geography, as well as recent fieldwork, I identify three forms of labour in particular: 1) ‘provisioning’, or the everyday, often collective, relational work people do to get by and make a living; 2) a mix of re-fashioning, reselling, rehabilitative and hope labour I am calling makeover labour; and 3) the work of navigating charity shops as sites of welfare governance and carceral space. Arguing that all three of these forms of labour are characteristic of the austerity economy, I explore how thinking about charity shops can help us to understand more about how a shifting, caustic present is lived and felt.

Dr Payson’s Research Seminar is open to all Cardiff University students and staff, and will take place on Wednesday, 13 November 2019, at 16:00 in Room 1.10A, Two Central Square.